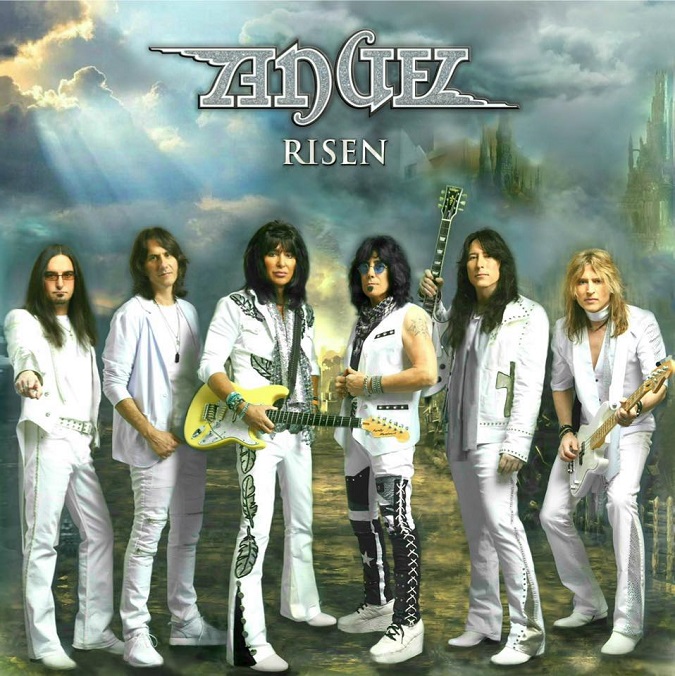 Has it really been 37 long years since singer Frank DiMino and guitarist Punky Meadows released an ANGEL album? It sure has.

Their last studio-recorded album together, 1979’s ‘Sinful‘, honestly was a powerless disappointment, especially since every record that came before it was pretty much a home-run. And yes, DiMino did put out a record under the band’s name in 1999, but for whatever varying rock styles it may have dabbled in, ANGEL‘s unique imprint just wasn’t among them.

But hey, be it 37 or 20 years passed; it doesn’t matter. Here we are, with two of the three original key components (keyboardist Gregg Giuffria did not return) in place, along with a more-than-game new backing crew, staring down the barrel of ‘Risen‘. Barrel? Absolutely, because this record is an absolute blast.

What ANGEL has managed to accomplish here is, given the current musical climate, is actually quite incredible.

First off, there is the size of the record. It’s 17 tracks, making for a pretty lengthy listen. This would be a sizable problem for most bands to pull off these days, but every single note here captivates. No filler. At all. None. Zero. Name the last 70+ minute album you sat through that managed to do that. Good luck.

Next is the actual content. The record is immaculately crafted, with each song having its own identity, yet unifying for a singular sound. The 70’s vibe is perfectly recalled, while also having modern preciseness. Sure, you have the prerequisite slower, ballad-y efforts (“1975” and “Don’t Want You To Go“, for example), but the overwhelming majority of are high-energy, upper-mid-tempo rockers that do NOT sound alike.

This is the heaviest ANGEL to date, all while somehow being the least proggish. The keyboards are still an essential part of the mix but streamlined to fit the song, not the other way around. This is focused hard rock at its roots’ best. And that closing rework of the 1975 classic “Tower“- Just magical.

Finally, kudos must go out to Meadows and DiMino for pulling off the near-impossible. Giuffria was considered a major force within the band back in the day, but they have more than proven they do and can carry on just as well without him, which may surprise some. Sorry, but it’s true. It certainly doesn’t hurt that Meadows’ playing is as sharp as ever. DiMino’s singing, although sounding more mature is still in full force, hitting all the right notes with ease.

I could easily sing the praises of ‘Risen‘ for much longer than I have room or time to do here. If it can manage to reach a broader audience, I fully believe it single-handedly has the capabilities of rejuvenating true, classic hard rock from the joke status that the ’80s twisted the genre into. Listening to it has such a powerful, positive, and uplifting effect, it feels like a sunny spring day drive through the countryside. It has made me feel young again, and I don’t know of any higher praise I can give it than that. Absolute, heavenly brilliance.

‘Risen‘ was released on October 4th (2019) from Cleopatra Records. Grab a CD directly from the label or on various physical or digital formats at Amazon. We have it streaming from Spotify below.