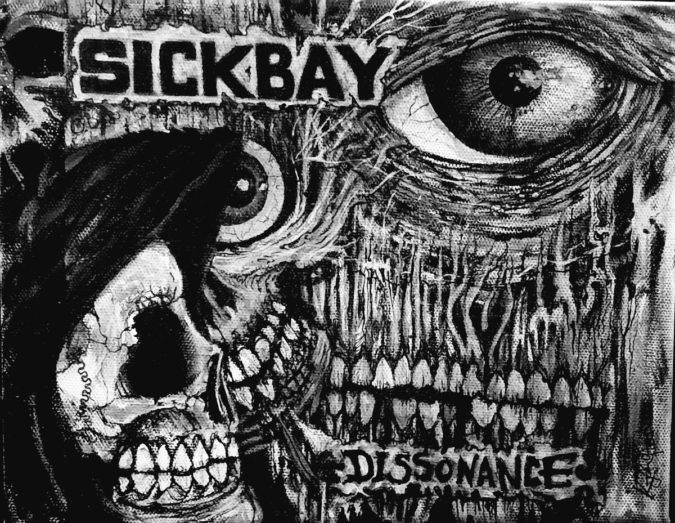 The Empire State of New York has been the breeding ground for much of the extreme metal manifested in recent decades, to be sure.

With locales recognized as being home to distinct genres of heaviness, for example, Florida is a state with its very own legacy of brutality, New York is also known for such. Though it is hard to put one’s finger on what is exactly a defining “New York sound” or style of death metal, it certainly exists. Still a skeptic? Just look at some of the bands that call N.Y. their home, ones like Suffocation, Immolation, Mortician, Incantation, Skinless, or Internal Bleeding. If you know anything about these bands, then you know they have something that sets them apart from others of a similar ilk from around the world.

Today’s subjects are certainly students from the new school of savagery who unflinchingly channel their old-school influences without restraint. They are the Hudson Valley’s SICKBAY – Tom Peluso (vocals and bass), Jim Sinon (guitar), and Joe Merando (drums) – and in early August, they released their monstrosity of a sophomore album, ‘Dissonance‘.

Upon it are eight compositions of somewhat stripped down, very straightforward, abhorrent audio that refuses to rely on studio-borne smoke and mirrors to embellish its contents. Instead, what we get are viscerally coarse songs like “Pandemic” or “Dead Stare Gaze” that consist of mostly mid-tempo intensities. Foregoing speed and undue flash much of the time, we get treated to downtuned tracks rife with crushing grooves and seemingly immiserate vocals. The latter are gravelly, gutturally generated verbal expressions that never stray far from just being, and just being abrasive at the same time.

This is not to say that SICKBAY doesn’t pick up the pace, for they do exactly this in the more energetic outpourings like “Scourge“. Animated and accelerated with winding musicality that makes its way forward with staggering grandiosity, this song may be the album’s shortest in playing time, but it is slaying all the while.

There is no weak link to be found here for other cuts such as “Bloodsoaked” or the rip-roaring “Roman Myth“, which are full-on frontal assaults. Fact is, “Roman Myth” is a valid standout, one that reaches occasional breakneck velocity as it builds momentum and then gradually descends.

However, when it comes to singling out my personal favorites of these tracks, it is all about the back-to-back “Found Dead” and “Gallows“. The first of the two, “Found Dead“, is the first pinnacle of this album and finds the SICKBAY three delving into some heavy doom enhanced elements. Yet, there is also grindcore style blast beats, and like the proverbial punch to the throat the band likens their music to, if this one does not seal your fate then its follow-up will.

“Gallows” gallops right into things with a precisely measured discharge of dense riffs and rhythmic precision that is impossible to resist. Backed by the fortitude of some powerful drum work, this song reaches a swing that seems the equivalent of that neck-snapped cadaver now kicking and dancing upon air.

New York’s SICKBAY strike and do so devoid of any softening around the edges of their latest studio bred beatdown, ‘Dissonance‘. They have carved themselves quite a nice, even uniquely distinct sound, on this salvo of bludgeoning steel. If you like your heavy metal extreme and merciless then you should report to the latest from SICKBAY immediately via the stream provided or at Bandcamp HERE.