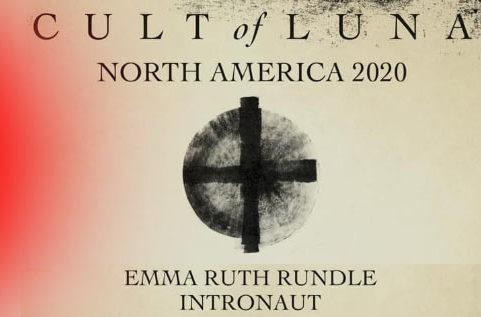 Less than one month since the arrival of their newest studio album ‘A Dawn To Fear‘ on Metal Blade Records, Sweden’s CULT OF LUNA announce future touring plans.

Early 2020 will see CULT OF LUNA return to the shores of North America for an extensive headlining run joined by support acts, Emma Ruth Rundle and Intronaut. Launching February 25th in Dallas, Texas, the trek will then play several strategic markets throughout the United States and Canada, before coming to a close in true North American fashion with a show on March 13, 2020, in Mexico City, Mexico. This final, tour-closing appearance will mark the first time that CULT OF LUNA has performed in Mexico.

The band’s September release, ‘A Dawn To Fear‘, has been receiving immense critical praise in the few short weeks since it arrived. It is available to order at MetalBlade.com.

Louisville, Kentucky’s Emma Ruth Rundle is a singer-songwriter, guitarist, and visual artist who originally made her bones with The Nocturnes. She is currently a member of Red Sparrowes and Marriages, yet as a solo artist, she has released a handful of highly eclectic, semi-experimental albums. Her most recent release was the 2018 outing for Sargent House, ‘On Dark Horses‘.

Los Angeles’ Intronaut are in their 15th year of crafting mind-expanding, progressive post-metal chock full of polyrhythmic complexities and jazz hues. Influenced by a wide variety of genres, Intronaut are trailblazers who often incorporate an abundant amount of experimental, psychedelic passages into their songs, utilizing an array of unique instruments such as sitars and use of hand percussion.

Together, any tour comprised of CULT OF LUNA, Emma Ruth Rundle, and Intronaut is sure to be one that will astound all in attendance. Find the routing and full itinerary to this one below; tickets are on sale now.