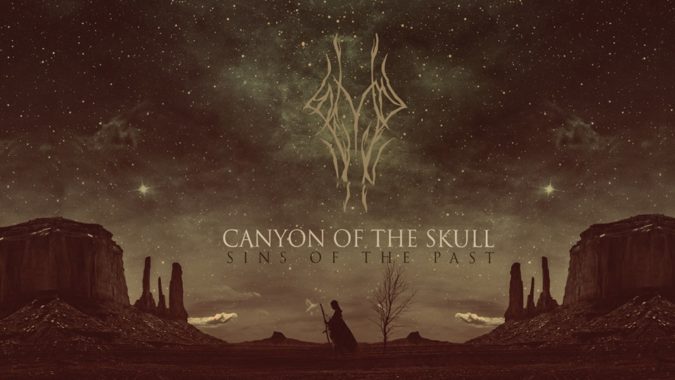 CANYON OF THE SKULL from The Windy City of Chicago, Illinois are set to unleash their third studio album, ‘Sins Of The Past‘, on November 20th.

In the span of its two lengthy, utterly epic tracks, the instrumental trio effectively conjures forth a beast of blackened heavy metal and doom. This is immediately recognized upon hearing the first song initiating the album, “The Ghost Dance“. This 25 minute-plus composition is a sinister, soul dissecting, slow campaign laden with oppressive doom elements and terror-inducing undercurrents.

Streaming at this time, “The Ghost Dance” is accompanied by the ‘Sins Of The Past‘ album artwork and other particulars. The album’s artwork, layout, and design were done by Erik Bredthauer. Guitarist Erik Ogershok had the following to offer about CANYON OF THE SKULL and their latest offering saying:

“I try to do different things with each record and this one is no exception. This record is visceral and immediate, like the self-titled, while being highly conceptual and dynamic like ‘The Desert Winter’. ‘The Ghost Dance’ is probably the best thing that I have written to date. ‘The Sun Dance’ is unlike anything that I have ever written before. It incorporates my basic philosophies of composition but applies them differently, one that I jokingly call prog-doom.

The main aesthetic and themes that Canyon Of The Skull was founded on remain unchanged. This band has always been focused on telling the stories of Indigenous Americans and their environments, specifically those of the American Southwest. I am still surprised at how many people have never met an Indigenous American, but we are not extinct, and this band exists to tell our stories both past, present, and future. This record is a bit more broad with the subject matter since it involves the rituals of tribes far from the land of my people. Also, this record is more influenced by recent events that have an impact beyond Native communities. I don’t like to talk specifically about the deeper meaning of any of my compositions as I want people to discover their meaning in our music. These two pieces have very specific meanings to both me and the wider world and googling the titles is my recommendation for people that want to delve deeper for the literal meanings.”

Founded by Erik Ogershok in 2006, the initial version of CANYON OF THE SKULL played many live shows and recorded a demo before career demands forced Erik to reevaluate things as a band. He then continued to release music as a one-man project for several years, before fate intervened once again and a multiple-member band manifested itself. Releasing two previous offerings in 2017’s ‘The Desert Winter‘, and 2015’s self-titled ‘Canyon Of The Skull‘, it would not be until 2018 that this act found its most formidable line up yet.

Relocating to Chicago that year, Erik soon recruited close friend Todd Haug (Powermad) as bassist and Mike Miczek (Broken Hope, The Atlas Moth, Powermad) as the drummer for the band. Now, a mere few months after that galvanizing embrace resulted in the evolution to becoming a trio, CANYON OF THE SKULL stands poised to impress with their imminent album delivery.

‘Sins Of The Past‘ was recorded, produced, and mixed by Sanford Parker at Decade Music Studios in March 2019, with mastering by Collin Jordan at Boiler Room Mastering. It will arrive November 20th and pre-order is available HERE.