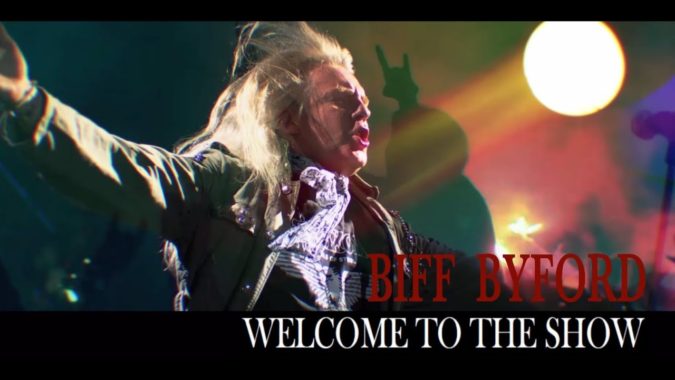 Biff Byford, the frontman and iconic voice of legendary NWOBHM mainstays Saxon, is set to step into the spotlight in early 2020, with his first solo album.

‘School Of Hard Knocks‘ is due to be released February 21st, 2020, through Silver Lining Music and was produced by Biff Byford. The album was recorded by Jacky Lehmann at Brighton Electric Studios in Brighton, U.K., and mixed at Queen Street Studios in Stockholm, Sweden by Mats Valentin. For the recording, Biff worked with guitarist Fredrik Åkesson (Opeth, Krux), drummer Christian Lundqvist (The Poodles), and bassist Gus Macricostas (Future Shock, ex-Battleroar).

Today’s announcement contains the album details and the first single, “Welcome To The Show“, presented in lyric video format. The song is unmistakable Byford, his bluesy croon soaring upon the solid, straightforward hard rock music delivering it. It provides the ideal introduction to the singer’s first foray as a solo artist, its title relative to Biff’s nearly five decades as a quintessential showman.

On the ‘School Of Hard Knocks‘ album, Biff explores a variety of things, including tales and stories from his own heart and soul. Along with that, he also investigates the Middle Ages and medieval history, among other intriguing subjects. The album is the manifestation of a long-held desire of Byford’s, a wish to deeper explore rock and roll. This is something he recently expanded on, saying:

“It’s been great to break new ground, explore new territories and work with some old friends. Having waited so long to make this album, I have to say, I am delighted with it! It has a whole range of styles, from the ridiculously heavy to ballads, and it is certainly my album.”

The first-ever solo album from Biff Byford, ‘School Of Hard Knocks‘, will be released via Silver Lining Music on February 21st, 2020.