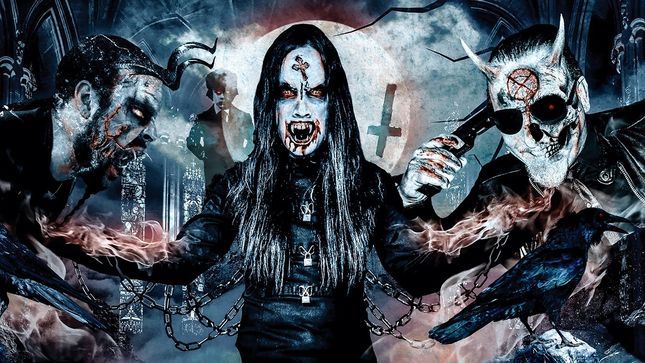 Northern California based, contemporary heavy metallers KILL RITUAL returns with a new single, “Rest In Pain“, off the band’s upcoming album offering, ‘The Opaque And The Divine‘.

The song and album are not the only new things within the KILL RITUAL camp, as their new singer Chalice (a.k.a. Brian Betterton) premieres on “Rest In Pain“, presented in the lyric video below. It also reveals the band, founder and guitarist Steven D. Rice (Imagika) and drummer Seamus Gleason, are raising the stakes. Once its subtle intro relents, the song explodes with a flurry of fiery, technical guitars backed by relentless tight-knit drumming. Chalice soon enters the fray with venomously aggressive vocals, a bit throatier in the verses, yet powerful and soaring once the choruses arrive.

‘The Opaque And The Divine‘ was recorded at Sonic Train Studios and Fossil Sound by Andy La Rocque (King Diamond), who also mixed and mastered the new album. Additional recording and engineering handled by Steven D. Rice, and the album artwork created by Jobert Mello for Sledgehammer Graffix. Andy La Rocque also makes a guest appearance on the record, along with Ion Vein’s Chris Lotesto.

About the upcoming album and other KILL RITUAL events, Steven D. Rice comments:

“The next chapter of Kill Ritual is totally logical as the band keeps moving forward. A bigger production, complex arrangements and huge riffs with progressive underlying tones are on the menu this time. My original concept of the band has always been big and we’ve gotten a little closer with this release. The huge scope of material and what it says about things in this present day are universal and the story is timeless. There’s no poor me, blame them, fight the power, hump the old lady, magic rock BS. It’s the classic Good vs. Evil story that will hold true forever. What’s changed? Nothing and it never will. Mankind will always destroy what he loves.

The new track ‘Rest In Pain’ is Kill Ritual laying down some proper old school metal which actually sounds refreshing in this current metal climate of down tuned copycat over produced shit being being passed off as metal over and over again. From classic riffing to proper metal vocals the track is definitely a good indication of where the band is going in the future. Enjoy!”

The future is now! KILL RITUAL is currently seeking a bassist with the following requirements:

“Applicants must be able to tour worldwide and have a valid passport with no criminal record. Send samples of material and photo. We also require 1 video of yourself playing at least one Kill Ritual tune. This is a worldwide search!”

Information and means of applying can be found at the band’s website: KillRitualMetal.wixsite.com/epkr

Further details of the new KILL RITUAL album ‘The Opaque And The Divine‘ are expected to arrive soon. The tracklist for the album is shared here, along with the “Rest In Pain” video created by Scott Rudd for SR Films. Enjoy!

‘The Opaque And The Divine‘ Tracklist: