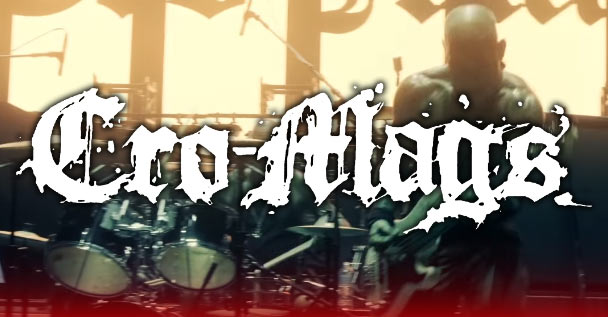 It was 1992 when iconic NYHC street crew CRO-MAGS shared their last official video, “The Paths Of Perfection“, from that year’s ‘Alpha Omega‘ album.

Now, nearly three decades later, the current incarnation of CRO-MAGS premiere “No One’s Victim“, their first new video in 27 years! Though it clocks in at a seemingly brief 95 seconds in length, it packs quite the wallop with its fast, hard-hitting burst of aural aggression. In typical CRO-MAGS fashion, it immediately goes for the throat and does not let up until it is over.

Filmed on location during the band’s 2019 headlining European tour and their support slot with The Misfits, “No One’s Victim” is the CRO-MAGS‘ boot-stomping return to form. With its high energy and imagery-driven volatility, the video expertly captures the mixture of metal, thrash, and punk styling that has defined the band since their initial inception.

With the legal disputes that marred them in recent years now over (a 2019 legal ruling effectively created two versions of the band – the other is Cro-Mags JM), bassist and vocalist Harley Flanagan is back at it. It being the creation of raw, in-your-face sonic beatdowns like that of the music in today’s new video. Alongside Harley in the contemporary version of this classic, the legendary band is guitarists Rocky George (ex-Suicidal Tendencies, Fishbone) and Gabby Abularach, plus drummer Garry “G-Man” Sullivan.

“No One’s Victim” is one of three songs from CRO-MAGS‘ ‘Don’t Give In‘ EP, their first new music in almost 20 years, released through Victory Records in August 2019 and streaming below. The band is preparing to follow it up with a second three-song EP, ‘From The Grave‘, due once again from Victory Records on December 6th.

Hear the upcoming EP’s title track, ‘From The Grave‘ featuring Motörhead guitarist Phil Campbell, and pre-order it at this link.