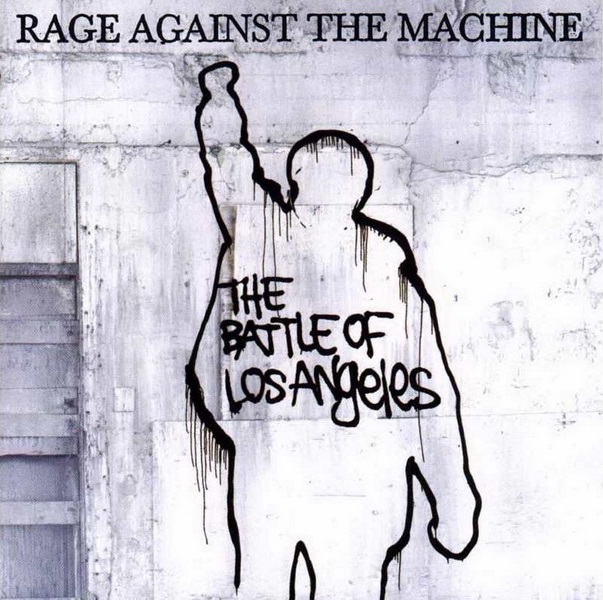 As popular as they were in their heyday, RAGE AGAINST THE MACHINE was an inherently divisive, polarizing band for many. Any band that questions the status quo, particularly the value and viability of America moving forward in its current state, is bound to ruffle a few eagle feathers.

Personally, the band’s message (that I sometimes agree with, sometimes not) was always secondary to the music these four men produced in the ’90s. Being political as an entertainer and/or artist is largely a thankless proposition (unless you cravenly indulge in the rah-rah faux patriotism of “Fuck yeah! Let’s bomb them back into the Stone Age!” – the unwashed masses will eat that shit up). But, like the man says, “to thine own self be true”, and anyone who doubts the band’s sincerity must be a world-class skeptic (I’m talking the flat-earth, “We didn’t land on the moon” types we’ve all had the good fortune of running into on the interwebs). But I digress.

“Guerilla Radio” swings hard, Morello‘s wah pedal working overtime, the anthemic chorus daring you not to join in shouting along, whatever your political affiliations might be. The simple but effective guitar motif that Morello employs in the solo is aided tremendously by his Whammy-pedal assisted “chewing on tinfoil” tone he first used in “Know Your Enemy“. When De La Rocha half-whispers, “It has to start somewhere / It has to start sometime / What better place than here / What better time than now?“, even the most mild-mannered citizen may be tempted to start hurling trash cans through their local Starbucks’ windows (after ordering a grande latte first, of course).

A silky, smooth walking bass line introduces “Calm Like A Bomb“, another Whammy-pedal aided and abetted guitar riff and quacking bass line serving as a backdrop for more of De La Rocha‘s vitriol-laced rapping during the verses.

“Sleep Now in the Fire” houses a punky / funky guitar riff that sounds like the feral love child of the MC5 and Jimi Hendrix. A jazzy drum pattern bubbles away ominously under the verses, over which the singer barks, “So raise your fists and march around / Don’t dare take what you need / I’ll jail and bury those committed / and smother the rest in greed / Crawl with me into tomorrow / Or I’ll drag you to your grave / I’m deep inside your children / They’ll betray you in my name“. Potent prose, indeed. The decidedly, well… RADICAL guitar solo sees Morello giving his guitar toggle switch a workout, sounding like a video game version of the backing track to the coming apocalypse.

The intentionally low-fi guitar stabs in the verses of “New Millennium Homes” are jarring in their disregard for the conventional harmonic responsibilities that most guitarists feel the need to uphold. If you want to inspire people to rebel, you have to start by shattering expectations of what is acceptable for a rock band to sound like, and RAGE AGAINST THE MACHINE had a sound that was all their own, and the car alarm guitar solo that brings this song to its close is a stellar example of this attribute.

Morello‘s bag of tricks seems inexhaustible, and “Ashes In The Fall” begins with my favorite guitar part he ever conceived, fashioning a piercing melody by pressing the strings of his guitar against the pole pieces of his pickups, extracting music out of something others would disregard as extraneous noise. Another distinctive Tim Commerford bassline anchors the song, while Morello uses sparse, but impossible to ignore, screaming guitar notes that soar high above the other instruments. Some of De La Rocha‘s best lyrics can be found here,

As the song draws to a close, the music drops down to a hushed minimalism, De La Rocha whispering angrily, “Like ashes in the fall,” over and over, a wonderful example of employing dynamics without sacrificing power.

‘The Battle of Los Angeles‘ is yet another scorching example of why the music of the ’90s still connects with modern audiences. Passion and honesty may be in short supply in society at large, but it’s still valued by many.

All four RAGE AGAINST THE MACHINE albums deserve a spot in any music lovers collection, but this might be their most diverse offering, and an absolute treasure trove of innovative, hard-hitting guitar work. It’s a molotov cocktail of sound and fury.

RAGE AGAINST THE MACHINE: