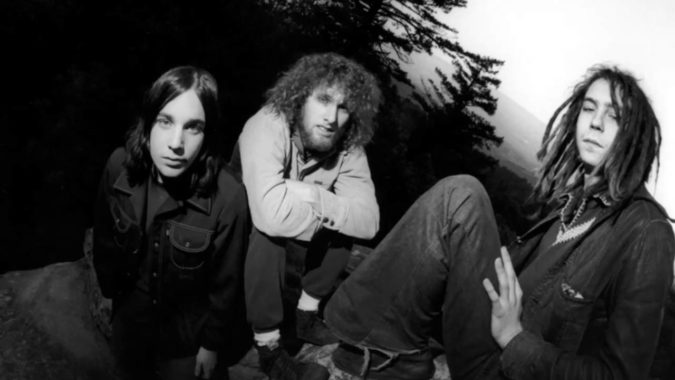 Before there was Sleep, before the myriad post-Sleep bands that followed – High On Fire, The Sabians, Om, Shrinebuilder, Kalas, and the like… there was ASBESTOSDEATH.

Formed in San Jose, California circa 1989, the trio of high school students getting together under this particular name were bassist and vocalist Al Cisneros, drummer Chris Hakius, and guitarist Tom Choi. At the time, thrash metal was dominating the non-mainstream music community and a newer style of music was beginning to take root in a region due north. ASBESTOSDEATH was not about trendy genres or pop culture appeal in any way, opting instead to create heavyweight, hoarsely raucous sonic emissions.

Not long after, the band decided to add a second guitarist, who was another high school pal named Matt Pike. The quartet went straight to work to flesh out their songs and had developed their initial sound. It was one quite aurally harsh and chaotic, rooted in sludgy doom and noise metal, with tinges of psychedelia and post-hardcore.

According to Chris Hakius, the band’s first gig was a high school talent show where ASBESTOSDEATH found considerable favor with their fellow students. Hakius is on record stating that the quartet would have won, but instead snagged the third-place slot after adults became upset with people stage-diving off a piano that was present at the time.

The year 1990 saw two releases from ASBESTOSDEATH in the form of 7″ EPs. The first of them, ‘Unclean‘, was self-released via the band’s Asbestos Records, followed by ‘Dejection‘, on Profane Existence. ASBESTOSDEATH sporadically played live at that point, but soon after the second EP release, Tom Choi left the band (later forming Noothgrush and Operator Generator), while Justin Marler was named as his replacement.

The existence of ASBESTOSDEATH was fated to be a brief one, as the band changed their name to Sleep. As Sleep, three of the four songs composed by ASBESTOSDEATH – “Scourge“, “Anguish“, and “The Suffering” – would be re-recorded by Sleep for their earliest release, ‘Volume One‘.

In 2007, Southern Lord Records reissued all four studio songs from ASBESTOSDEATH on CD and 10″ vinyl as ‘Dejection, Unclean‘.