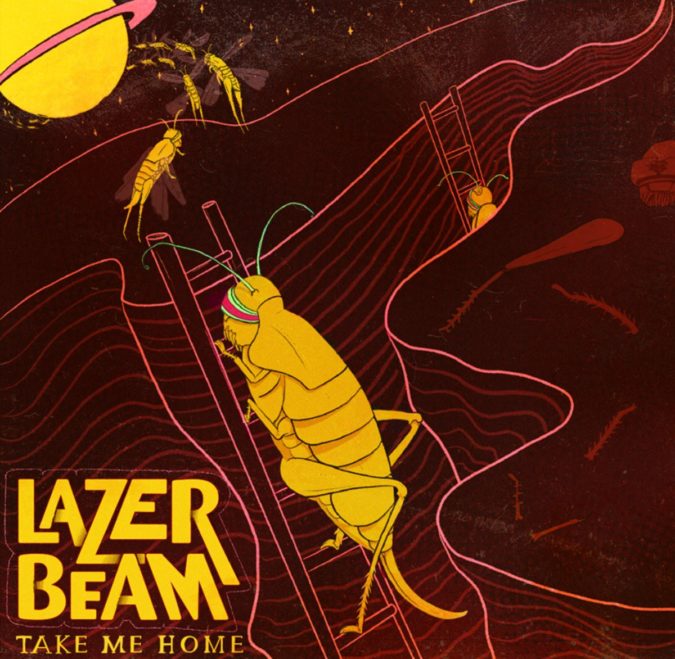 From the Sonoran Desert rises new undertaking LAZER BEAM, like the mythological bird that inspired the name of the nearest populated locale, Phoenix, Arizona.

LAZER BEAM is the working name for the project helmed by multi-instrumentalist Lucust French, also frontman and guitarist of Burn Thee Insects. This is where any connective threads between the two acts end, though, for where Burn Thee Insects was more of a slightly doom-tinged, fuzz rock unit, this is not. LAZER BEAM is instead a desert rock take on psych-infused, commercially accessible doom pop.

The greatest example of this is provided in this first taste from LAZER BEAM, the introductory single and subsequent official video, “Take Me Home“. Recorded in Tempe, Arizona with engineer and producer Chris Hughes (Burn Thee Insects, KOOK, Phantom Hound), French played nearly every instrument, including drums, bass, guitar, and Moog, while also providing the vocals.

His one-man artistic barrage did not end there, as Lucust directed the “Take Me Home” single’s visual clip with photography from Emily Freeman and Jon Patrick (who also appears playing drums). Relating the tale of “…a drunken, one night stand love story“, the song is spilling over with infectious, fuzz-powered riffs, deep grooves, dance beats, and nearly irresistible presence. It strikes like a scorpion’s sting, injecting a hypnotic aural toxin so enjoyably strong that it is easy to get lost within the song.

Lucust reveals that he has spent the last year jamming around the greater Phoenix region and club testing songs and has now accumulated enough of them for a record. The songs are inspired by real-life grit, from drugs and alcohol abuse to societal disillusionment, yet they ultimately share French‘s sense of optimism and hope. I asked Lucust what his motivation was in the forming of LAZER BEAM, to which he replied:

“I wanted to make more pop oriented rock music. I have songwriting schizophrenia, so I decided to make all the pop songs I’ve written Lazer Beam, and all the doom ones Burn Thee Insects. I wanted Lazer Beam to connect a lot more with my own younger generation and kinda go that direction.“

There will be more on that to come as creativity and further recording looms, with a proper album being the end goal. Until then, LAZER BEAM is here and asking if you are willing to “Take Me Home“.