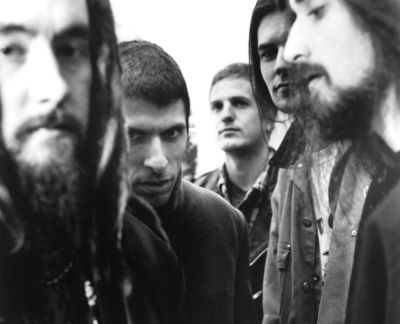 It was 1992, in The Garden State of New Jersey, U.S.A., when the Asbury Park-based GODSPEED materialized with its founding trio of guitarist Tommy Southard, drummer Tim Schoenleber, and bassist Rob Hultz.

Soon after, the three recruited David Blanche as their vocalist and, in a somewhat unusual move, took on a second bassist, Chris Kosnick. In comparison to the way things generally happen in the music world, GODSPEED seemed to find favor with the gods of rock as events happened quickly for the quintet. The buzz about the band, both verbal and printed, went ablaze like wildfire almost right from the start, fueled in part by their impressive live displays.

The GODSPEED guys played a highly energized style of heavy rock, a kind inspired by the greats of the Seventies and instilled with influences from Eighties’ heavy metal. They were routinely scouted by record label A&R representatives at the band’s well attended live gigs, with one particular label more tenacious in their pursuit of GODSPEED. Atlantic Records signed them in 1993, and the following year they entered the famed place that Jimi built, Electric Lady Studios in Greenwich Village, New York City.

It was on these hallowed grounds that GODSPEED and producer Rachel Bolan (Skid Row) recorded their début, full-length studio album, ‘Ride‘. Prior to this, the band had independently issued a five-song demo and at least four separate singles. And, if they believed happenings had come in short order thus far, the next series of experiences surely blew their collective minds.

‘Ride‘ quickly gained traction with fans of rock and metal music, with help from the well-received video for “Houston St.” getting airplay on MTV’s Headbanger’s Ball. The introductory album paved the way for GODSPEED‘s presence on two high profile tours that followed the album release. The first of them was a European trek with the godfathers, and gods, of the Doom Metal movement, Black Sabbath and Cathedral, respectively.

The connection between the pioneering elder statesmen of all heavy music and the upstart Americans was made when GODSPEED appeared on the 1994 Black Sabbath tribute album ‘Nativity In Black’. Teaming up with guest vocalist Bruce Dickinson of Iron Maiden, they recorded a cover of the song “Sabbath Bloody Sabbath” which became a highlight of the compilation for many fans. Then there was the fact that GODSPEED was managed by Gloria Butler, the wife of Black Sabbath bassist, Terry “Geezer” Butler.

The United States got their fair dose of GODSPEED as well, the band supported DIO on two separate tours. Another run saw them rocking their homeland alongside Sugartooth and Mutha’s Day Out, all of this helped to cement GODSPEED as a superb band with a wide-open future ahead of them…. or maybe not. Unfortunately, it is the latter, for just a handful of years after their formation, GODSPEED disbanded in 1996, for reasons unspecified.

Musicians making up the band then went on to contribute to an impressive array of mostly well-known acts. After stints as lead guitarist in Sugartooth and Slaprocket, Tommy Southard was joined by Rob Hultz as the pair sought to rebuild GODSPEED. However, it soon became clear that the music they were making was a different animal altogether and things evolved to become the heavy rock band Solace. In time, their former bandmate, Tim Schoenleber, reunited with them in Solace.

GODSPEED bassist Chris Kosnik is part of rosters in at least three bands embraced by the stoner rock scene: Black Nasa, The Atomic Bitchwax, and Monster Magnet. His bassist counterpart in GODSPEED, Rob Hultz, has been in the legendary Trouble since 2013, while vocalist David Blanche has been part of acts Eccentric Bohemians and Dirty Johnny, among others.