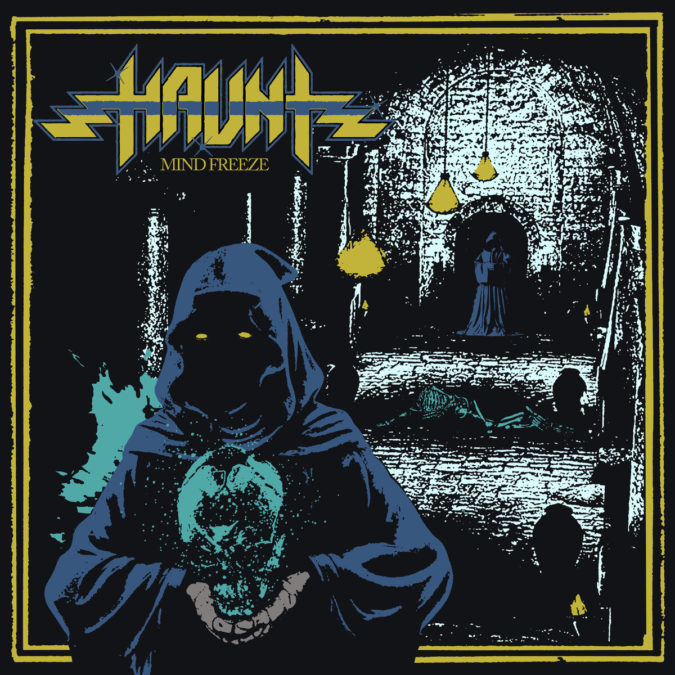 The elevated anxiousness for the album’s delivery is no ploy either, for HAUNT has achieved fevered recognition in their short two-and-one-half-year existence. Founded and fronted by primary songwriter Trevor William Church (guitar, vocals), the New Wave Of British Heavy Metal influenced HAUNT is musically rife with classic accents.

Propelled by a fiercely guitar-centered style of metal possessing a melodic heaviness at its core, the band’s music is infectious. With two studio albums, two EPs, and a pair of recent splits now behind them, HAUNT – rounded out with John Tucker (lead guitar), Taylor Hollman (bass), and Daniel Wilson (drums) alongside Church – are on the move once again.

Never forsaking the signature elements of the music their fans find so appealing, HAUNT raises the bar once again with ‘Mind Freeze‘. These dynamic compositions are charged with impassioned playing, while the quartet embellishes these songs with a new element: synthesizers. Layered subtly into these tracks, they simmer right below the surface where they result in profoundly weightier songs.

The best example of this is found in the first single issued, the title track, “Mind Freeze“. The song is presented here via the official video directed by Jessica Rudolph, along with the album details.

The HAUNT album ‘Mind Freeze‘ will be released January 10th from Shadow Kingdom Records and is available on CD, vinyl LP, and cassette tape formats; pre-order available at the following links: