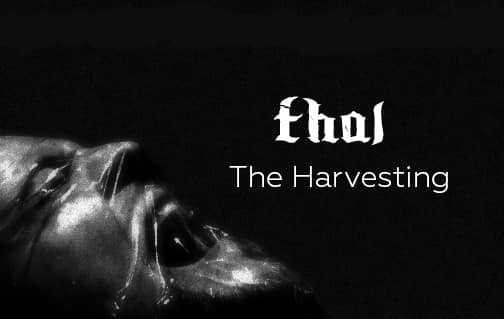 2020 is right around the corner and closing in, but we still have yet to shut the books on the current year, of course.Rest assured that any year looming, lying in wait to arrive, will begin on one hell of a high point right after this next item is unleashed.

Let’s be real, any year, month or week, day, whenever a new studio album from Ohio’s THAL is unleashed makes that a great time to be alive! So prepare to live it up, brothers and sisters, for one of The Buckeye State’s heaviest exports are gearing up to do exactly that. Come December 20th, THAL (The Heathens Are Loose) will initiate ‘The Harvesting‘ via Overlook Hotel Records.

As a fan of THAL from the band’s earliest audio-based public proclamations, I feel as if I have been on the ground floor of a great undertaking. Beginning life as something likened to a construction project, THAL and its founder, Vince Green, have undergone quite the transformation in the times since. Now, it has taken on the nature of something that is an agent of change, an entity bent on the destruction of what is perceived as the “norm” in music.

Today, we ecstatically unveil the exclusive premiere of “Tonguerazor“, the first single from the imminent new THAL album, ‘The Harvesting‘. The song is classic THAL in every way, ala subtle intro of isolated instrumentation percolating as unseen pressures build (it won’t be long now). Critical mass is fast achieved, guaranteed by means of a massive, mile-wide riff and mounting rhythmic intensities.

This is what guitarist, vocalist, and songwriter Vince Green, along with his drum kit bound, multi-instrumentalist cohort Kevin Hartnell do best: Create ungodly heavy doom music ingrained with groove and impudent attitude.

Another thing they also do greatly soon makes its presence known: experimentation. In this particular song, it is twofold with the first loosed just beyond 40-seconds in, the point where the album’s recurring synthesizers are inserted. You read that right – synthesizers – they are a prevalent element to much of ‘The Harvesting‘ music. Here, they yield to the coming vocals of Vince, inflected with abhorrence and expounding a bloodlust.

Vince Green shared the following insight to the song, along with how Bandini came to be involved, saying:

“[The song] is about having an intense disgust with today’s society driving a fantasy world of violent solutions. Margherita Bandini is an Italian native who I became friends with about a year ago. She had written a review of ‘Reach For The Dragon’s Eye’ and I wanted to thank her. While looking for her contact information, I discovered that she was quite an accomplished vocalist in her own right and an immediate connection was made. I do hope we get to work together again in the future!“

Look sharp, readers, and dive into the slicing, stainless steel density of “Tonguerazor“, streaming here. The new album from THAL, ‘The Harvesting‘, arrives December 20th from Overlook Hotel Records and is available on CD and digitally; pre-order HERE.