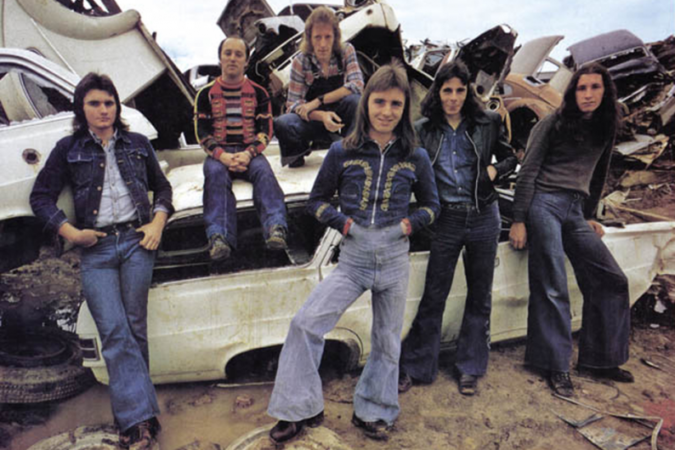 If you are someone a bit “seasoned” or, say, long in the tooth, then perhaps you recall the early 1900’s comic strip character, Buster Brown.

Created by Richard F. Outcault, the boy with a look similar to Little Lord Fauntleroy (though he preceded him) was presented publicly in 1902. In 1904, Buster was adopted as the mascot for the Brown Shoe Company, along with other popular personas from the strip, including his sweetheart Mary Jane and his dog Tige. Up until the 1930s, the shoe company hired persons of shorter stature to portray Buster in stores and theaters, while Buster even got his own comic book as a shoe store giveaway during the ’40s & ’50s.

You may be asking “What the hell does this have to do with Rock ‘N Roll?“, to which I would answer, “Nothing“. Well, allow me to rephrase my reply to something along the lines of “This shoe peddling yahoo is who we are here NOT to spotlight.“

Instead, let us leave this time period altogether and move up a few decades to 1973, in Melbourne, Australia, where the rock and blues band BUSTER BROWN had formed (not to be mistaken for Louisville, Kentucky’s own rock act, Buster Brown). The Australian BUSTER BROWN contained some players that went on to achieve large-scale recognition, particularly singer Gary ‘Angry‘ Anderson and drummer Phil Rudd. More on that to come, but at the start, the two were joined in the band by bassist Ian Ryan, keyboardist Chris Wilson, and guitarists John Moon and Paul Grant.

The BUSTER BROWN from down under quickly became a local favorite as fans discovered the band’s appealing style of hard rock melded with rhythm ‘n blues. Reverence for them helped to land spots on several big music events, most notably the 1974 Sunbury Rock Festival where they shared the stage with such acts as Ayers Rock, Blackfeather, Chain, Madder Lake, Sherbet, and Queen (in their first-ever Australian appearance). Several of those bands that played that festival were signed to Mushroom Records and within months of the show, the label released a two-part, live, various artists’ album, ‘Highlights Of Sunbury ’74 – Part 1′ and ‘Part 2’, which contained two BUSTER BROWN songs.

A lot happened for the band in 1974, including bassist Geordie Leach replacing Ian Ryan, while public support for BUSTER BROWN grew. It grew in part due to their being lauded by Sharpie gangs; violence-prone suburban youth “groups” whose name was derived from their focus on looking and dressing “sharp”. This was nothing exclusive or even detrimental to BUSTER BROWN, for those wilding youngsters were also known to back the bands Coloured Balls, Madder Lake, and solo artist Billy Thorpe.

BUSTER BROWN continued advancing as their first single, “Buster Brown“, was issued by Mushroom Records in July of 1974. Before year’s end, the full-length, début studio album ‘Something To Say‘ – produced by famous Aussie rocker Lobby Loyde (aka John Baslington Lyde of Purple Hearts, Wild Cherries, Billy Thorpe & The Aztecs) – also arrived from the label. It was a definite high point for the band because the looming 1975 year saw an abundance of change, and much more, head their way.

A major one occurred right as 1974 came to a close, Phil Rudd left the band to join an early version of the one he found his true fame in, AC/DC. Anderson, Leach, and Wilson carried on with a revamped BUSTER BROWN that included Dennis Millar on guitar and Trevor Young on drums. The introductory album continued to attract listeners and fans while a second single and the album’s title track, “Something to Say“, was released. For whatever reasons, this line up of band personnel was short-lived.

Anderson sought once again to salvage things and formed the third version of BUSTER BROWN in late 1975, comprised of Ken Firth on bass (ex-Tully), Billy Miller on guitar and vocals, Dave Springfield on guitar, and Dallas ‘Digger‘ Royal (ex-Band Of Talabene) on drums. However, the continuation of BUSTER BROWN just did not seem to be in the cards and before the year came to a close, the band had reached its end.

The alumni of BUSTER BROWN went on to participate in other musical undertakings… like The Ferrets, a band with Ken Firth, Brian Miller, and Dave Springfield. As mentioned above, Phil Rudd joined AC/DC in 1975, and remained there until 1983; then again from 1994 to 2015, and was inducted into the Rock & Roll Hall Of Fame with the band in 2003.

Vocalist Gary ‘Angry‘ Anderson joined the now world-renowned Australian hard rockers Rose Tattoo in 1976, where he remains to this day. In time, his former bandmates Geordie Leach and Dallas ‘Digger‘ Royall regrouped with him in Rose Tattoo. He has also worked as a television presenter, reporter, and actor, along with other endeavors. On Australia Day 1993 (January 26th), Anderson was made a Member Of The Order Of Australia for his tireless work in his role as a youth advocate, where he champions causes to empower young people.

Over the years, Australia’s BUSTER BROWN has continued to win over fans through their discovery of the band, a true “one album wonder” with ‘Something To Say‘. Respected rock historian Ian McFarlane said the following of BUSTER BROWN:

“One of the most notorious street level, boogie outfits of its day… [they] built up a solid following around the pubs, and among the skinheads on the suburban dance circuit“.

In 2005, the label Aztec Music remastered and re-released the ‘Something To Say‘ record on CD, with six bonus tracks included.