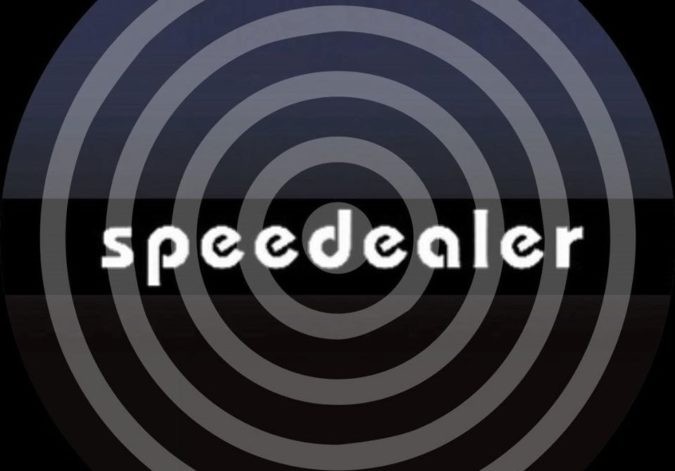 Texas has long been home to some of the most incredible bands to take The Beatles directive of “Come Together” to heart. Perhaps one of the greatest to do so is SPEEDEALER, an abrasive bunch to be sure, one with an unhinged, devil-may-care attitude toward music.

It might give some pause to ponder the fact the band has been together since 1992 or 1994, depending on who you ask. Beginning their existence under the name REO Speedealer, it wasn’t long before that other REO band served this one with a cease-and-desist order on their moniker, as a result, their name was shortened to SPEEDEALER.

In the quarter of a century since, the band has built a loyal cult fan base over the expanse of six studio album releases. Possibly interesting to the uninitiated is the Who’s Who of those who have produced those albums, they include Daniel Rey (Ramones, Raging Slab, Circus Of Power), Jason Newsted (Voivod, Metallica, Echobrain), and J.D. Pinkus (Butthole Surfers, Honky, Melvins). During this time, members have come and gone and there have been hiatuses and periods of inactivity.

In the summer of 2004, SPEEDEALER ceased as an actively working band, at least for a few years. Between 2008 – 2012, they played only select shows or special occasion one-offs, but come 2016, all of that changed once again. The two mainstays of SPEEDEALER, guitarist Eric Schmidt and drummer and vocalist Harden Harrison, re-established the band with new blood in vocalist Daniel Barron (Swingin’ Dicks) and bassist Rick Pearson (The Buck Pets).

In late 2018, they entered Sonic Dropper Studio with Daniel Rey and Jim King behind the boards, and with studio-only guitarist Jeff Hirshberg, the rejuvenated band recorded their sixth album. The 10-song ‘Blue Days Black Nights‘ is the result, released earlier this year from Rise Up And Fall Records.

For those previously exposed to this act, the first new SPEEDEALER album in 15 years is just like old times. It’s a nostalgia-inducing new chapter comprised of the same ballsy, amphetamine fueled, punk-as-fuck grit rock the band has always specialized in. On the other hand, for the folks just now being introduced to these stalwarts from The Lone Star State, count your blessings if you survive the experience.

Dismiss that warning at your own risk, though the introductory track, “Never New“, should make you reconsider that mistake immediately. What? You don’t think your life can be snatched from you in 85-seconds? Think again, fool! “Never New” is a gat-damned furious assault of lightning-fast guitars, machine-gun drums, and spit-showering barked vocals. This dizzying dynamo of a tune sets the pace for the remainder of the record, its blistering battery a heavyweight, black ‘n blue inducing howdy-doo.

For the follow-up comes the crippling, abusive groove-imbued “Rheumatism“. With a deluge of grainy riffs raining down right from the start, an impenetrable wall of recurrent rhythms soon bolsters the barrage. Don’t expect this number to mimic any symptoms of the title affliction though for there is nothing stiff about this fevered inferno. Truth is, your stereo speakers should be engulfed in flames by this point so “War Nicht Genug” will render an ever so slight bit of a breather. With a little less intensity taking place, and a decidedly de-escalated delivery to boot, the more melodic nuances of this one serve as a slight refresher… and we’re gonna need it.

“Nothing Left To Say” is an aural oratory that speaks in volume, it’s in-your-face and oh-so loud and intrusive. Another cut to the quick that does as intended in under two minutes, this is SPEEDEALER going into a near thrash metal state. Raging with a vehement frenzy of instrumentation and pseudo vomited projectile vocals, this song is a volatile explosion of aggro savagery. Thanks to a press release accompanying this album, we are made aware that this song, the album starting “Never New“, and a third track, “Shut Up“, were written in 2005, initially intended for another SPEEDEALER release.

Somehow, assuming you’re still here and standing, we arrive at the halfway point of this album with the brimstone blues of “Sold Out“. Despite the track’s title, this is not even a possibility in my opinion, as it’s not like SPEEDEALER has toned their shit down in any way. Nor have they penned a prerequisite ballad or hired choreographers to create some dance moves for them. Nah, fuck that noise because THIS is the noise of those having clearly sold their souls for rock and roll.

In some deranged gesture of solidarity, we are soon served another rapid burning sonic salvo expressed as “Losing My Shit“. In union with the band, the title is a sentiment we can surely identify with and relate to, right? Cut it loose or cut it down, cutting to the bone and cut to the ground, this is a prompt and to-the-point shit kicker. The action referenced in the title is one many people feel as if they are facing on an hourly basis these days. Like Van Halen said, “I don’t want to hear about it later…“, so accept the invitation and get that crap out of your system now… for this is the song to do it to.

Since reaching the halfway point of this record a pair of tracks back, I’m noticing an ever so slight increase in slower moments. There is nothing wrong with this, of course, and one need only submit themselves to “A Reckoning” to have this fact reinforced. It’s a chunky, chugging number laden with thick turns and curves, though tight ones to be sure. I especially dig the coarser, more gravelly, grainier type vocals narrating things.

Speaking of digging, we hit pay dirt with one of my favorite selections, the aforementioned older composition (and perhaps directive to someone), “Shut Up“. This profanity-laced diatribe is a terse stricture both verbally and musically, served up from someone that doesn’t “give a fuck…” for certain things. They make that clearly known rather quickly, not messing around or wasting time in this song, sounding a bit inspired by the 60’s Batman TV show’s theme song.

We are nearing the final stretch of an album nearly two decades in the making, and with two songs to go, we receive the longest pair of tracks yet. The songs “Mainmast” and the title track “Blue Days Black Nights” are also two sides of the coin, so to speak. The first, “Mainmast“, is a hard-hitting tidal wave of fluid riffing backed by a drenching of rhythmic bass lines and drumming. It spouts vocals that follow the currents carved beneath them, patterned in a sinuous sequence and it is all hands on deck for this great inundating.

Title track “Blue Days Black Nights” is “…a nod to ELO” according to the band, but I am guessing that nod does not really occur until about 50-seconds in. I say that due to the early portion of this song being a surging, full-on bombardment of unrelenting heavy metal. Once it does subside, the unmistakable acknowledgment of Electric Light Orchestra is presented in a melodic, three-minutes-plus piece titled from lyrics in the ELO song “Telephone Line“.

It is an unusual, yet thought-provoking end to an album that is otherwise not melodic in the conventional sense, nor peaceful or calming. As I declared about the intro song early on, it and this entire album, are more in tune with rendering a beating to leave listeners black ‘n blue. But, what a damned glorious beating it is!

SPEEDEALER Winter tour dates are to be announced soon… in the meantime, you can go get your ass kicked now with the triumphant return of SPEEDEALER via ‘Blue Days Black Nights‘ – available for purchase at the band’s official locations:

SPEEDEALER will join Cirith Ungol, Blood Ceremony, and others in headlining the 2020 edition of the infamous MARYLAND DOOM FEST (co-sponsored by Riff Relevant). Set to take place in Frederick, Maryland on June 18th – 21st, 2020 with Early Bird Tickets going on sale December 17th, 2019, and available until the 31st – visit the MARYLAND DOOM FEST website for further information.