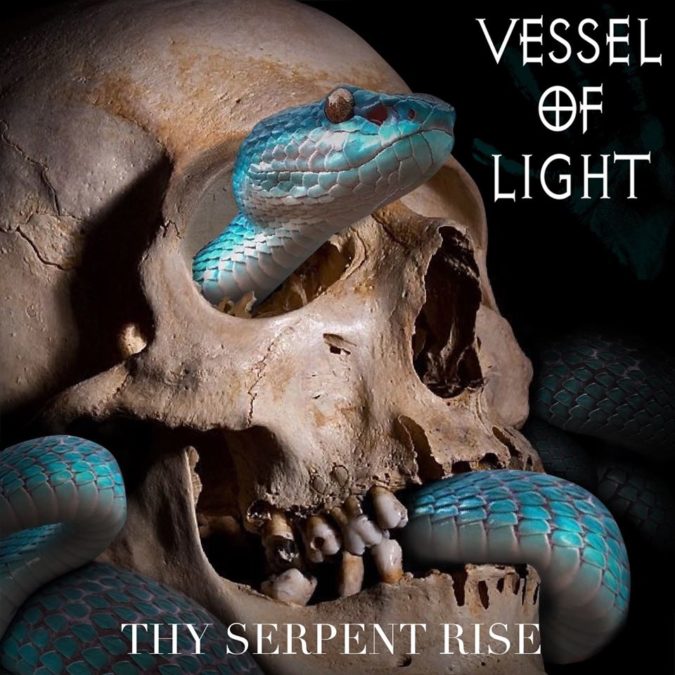 Every so often, the stars in the celestial sheet spread across the sky fall into alignment and uncommon phenomena occur.

In the world of underground music, an astonishing new project officially unveiled itself in November 2017. VESSEL OF LIGHT had arrived by means of a self-titled EP served that same month [reviewed HERE]. The intrigue was piqued when people learned of the unusual union of musicians making up the duo at that time… yes, duo. Between vocalist, drummer, and lyricist Nathan “Opposition” Jochum (Ancient VVisdom) and guitarist, bassist, songwriter Dan Lorenzo (Hades, Non-Fiction, The Cursed), the two scarred their mark upon the history books of psychedelic metal with the release.

A little less than one year later, VESSEL OF LIGHT once again cast its black sheen upon the world’s citizenry. The diametrically undifferentiated twosome took us all to the ‘Woodshed‘, literally, with that 2018 offering [also reviewed HERE]. When amassed side by side for comparison or otherwise, these records were significant milestones in their own right.

Now, once again, a little over another year has passed, but it is one that has witnessed the metamorphosis of VESSEL OF LIGHT. Nathan and Dan are now joined by former bandmates of the latter, drummer Ron Lipnicki (Whiplash, ex-Overkill, Hades) and bassist Jimmy Schulman (ex-Hades, Attacker). So, for you old-school lovin’ metal aficionados out there, you do realize that VESSEL OF LIGHT is 3/4 of classic metal legends Hades, right? Tell the truth.

Recently, this quartet independently released the band’s third studio effort, ‘Thy Serpent Rise‘. Now, it is at this point I shall suggest you do something, and this is it: Forget what you think you know about VESSEL OF LIGHT! Doing so will certainly be a necessity for you to fathom the fact this fully fleshed out incarnation of the band has shed its past like a second skin.

Transformative evolution is what every burgeoning band should desire and seek within that which they create. In layman speak, no serious band wants each of their releases to sound indistinguishable from each other. We can’t all be AC/DC, you know? Ponder for a moment, what is the absolute best approach applicable to prevent such stagnation from within? Answer: The complete avoidance of repetition.

Whether precisely planned or a spontaneous truth, the latest from VESSEL OF LIGHT is the embodiment of this electric tenet. This musical equivalent of a one-eighty first begins with a prelude of lumbering doom in excess and spoken word intro to distress. “Thy Serpent Rise” indeed; brief, and before you know it, strikes “Abandon Life“.

This is where we begin to perceive a difference as this audio toxin yields increased intensities, a metallic grunge with speed. The bottom end is anchored with dense rhythms, despite the sense of urgency elsewhere in the tempos. All the while, Nathan‘s gravel encased, blues-imbued vocals reveal the lack of hope one must have to, “Abandon Life“.

Whatever possible differences hinted at before, we find them fully unfurled in “Meet And Bone“. This high octane, premium take on doom ‘n groove quickly brings to mind some of the punkier moments of Saint Vitus. The ballsy, cock of the walk manifests in its muscular musical form, emanating in riffs, resonating in badassery. This is as infectious a song as any ever offered up from VESSEL OF LIGHT previously, it’s the fangs of the asp, and once bitten…

“Urge To Kill” comes on like a controlled hurricane at a quickened pace, this rhythmically driven hymn of menace. More now undeniable heavy metal elements permeating this record are evident here; at the same time, significant signature VESSEL OF LIGHT quips, both sonic and sung. Dark and sinister, the song work from Lorenzo, Schulman, and Lipnicki is ominous, enthralling music that ingratiates. Jochum is also being true to himself in cheerless lyrical themes, ones either bleak and disconsolate, or sleek and homicidal.

The shared history between the trio of Lorenzo, Schulman, and Lipnicki lends itself to being a sort of symbolic glue, their past providing familiarity with one another. It is a shortcut that allows for a detour, one avoiding having to figure each out in the trenches of the live stage setting. Dan and Nathan are bound to have developed a sense of each other’s strengths and weaknesses by this point, with a handful of years together within VESSEL OF LIGHT. Dan Lorenzo is the linchpin, of course, this slinger of the six-string providing a centering of all things structured around the truest universal viscid: The Riff.

The Riff is inescapable, it is by demons driven within songs like the bluesy doom of “Save My Soul“, or those providing the prerequisite nod to Iommi in “Decomposing Mental Health“. The latter is a showcase for the word and verbal talents of Nathan, his interpretation and elaboration on a subject long avoided in the metal community. Sure, it has been hinted at on tongue-in-cheek song essays shrouded in innuendo providing avoidance to the real issue itself. Therefore, it is reassuring to see entire works or albums devoted to expounding upon this once-taboo type of subject matter.

The opposite of The Riff returns via “Skin In The Game” and “Hello Darkness“, two brief, melodic interlude pieces similar to the one that began this album. Sedating, yet striking – in a sense, each inviting us to gather our wits and providing the breather needed to do that. “Skin In The Game” does it following one of the heavier, more aggressive numbers to grace this record, the quite fittingly titled “Rush Of Blood“. This one is a slithering earworm burrowing its way in, pushed and hammered by the hefty rhythmic discharge of Schulman and Lipnicki.

“Hello Darkness” also follows a heavyweight, a song that has been my immediate favorite from first listen, “Eternal Sleep“. This monstrous earthmover is an unstoppable sonic force unto itself, the harrowing highlight of this bleak artistic expression. Once its emission begins, it envelops and constricts, tightening sonic coils clenching as a tension seems to build. Worthy of mention, if only my own appreciation, is the clearly more forcefully aggressive vocal styling of “Eternal Sleep” and “Rush Of Blood“. Each even has its own guttural grunts delivered by means of the most menacing vocals from V.O.L. yet to date.

The pluses of this album are numerous and when tallied, do not belie the truth in any way, for the facts are the facts. There is an evident growth and gelling that has occurred within VESSEL OF LIGHT, due in no small part to the fleshing out of what is now a full band. With ‘Thy Serpent Rise’, that band has discarded any iota of filler and fatty excess, trimming it away and leaving only the best substance for our consumption. Clocking in at a little under 35-minutes, the focus seems to be on songwriting and the degrees of intensities within each. So, inject the venom and come ride the snake that is ‘Thy Serpent Rise‘.

VESSEL OF LIGHT will be performing at the 2020 edition of the MARYLAND DOOM FEST (co-sponsored by Riff Relevant). Set to take place in Frederick, Maryland on June 18th – 21st, 2020. Early Bird Tickets have gone on sale December 17th, 2019, and are available until the 31st – visit the MARYLAND DOOM FEST website [HERE] for further information.