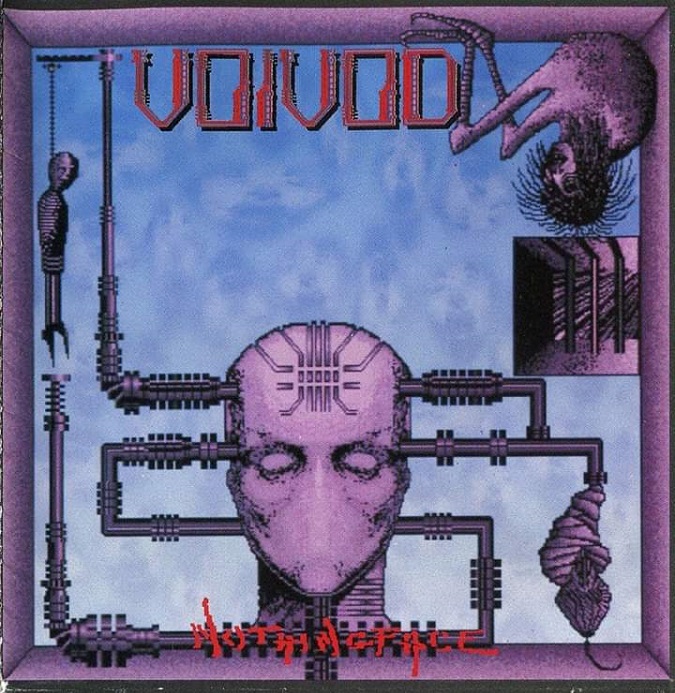 The pursuit of individuality is a common theme amongst artists of all stripes. Most bands aspire to have a singular sound, one that is immediately recognizable from the hordes.

VOIVOD certainly had that from the start. But unlike most groups who were content once they hit upon their own particular voice, VOIVOD has challenged themselves and their fans continuously and vigorously over the entirety of their 35-year history.

They began their existence as a punky thrash outfit who could barely play their instruments but grew exponentially as musicians and songwriters with every release. Oozing out of the Canadian landscape that was both intensely secluded and being polluted daily by the industrial machine that had only just begun its insatiable hunger for resources, VOIVOD had a gloomy aesthetic from its inception.

Drummer Away (Michel Langevin) had spent his childhood imbibing horror and sci-fi books and films and the diverse music of bands like Motorhead and Rush, then used it as fuel to create a threatening world of technological nightmares and a bleak future. His intricate, otherworldly artwork has graced every VOIVOD album and is as inseparable from their overall vision as their music.

Every VOIVOD album, particularly in the first half of their career, was a giant leap forward in terms of production, playing, and sophistication. From the crude attack of ‘War and Pain‘ to the more refined and increasingly cerebral endeavors explored on albums like ‘Killing Technology‘ and ‘Dimension Hatross‘, VOIVOD was a group always looking to expand its consciousness and reach.

The band’s fifth album, ‘Nothingface‘, released in October of 1989, was yet another astonishing expansion of the group’s abilities and scope. The listener is immediately transported to VOIVOD‘s world by the lovingly-created, but odd, artwork that adorns the album cover and its interior, Away providing drawings for all of the original songs here, each one distinct and intriguing. Langevin‘s jagged scrawl is used on the lyric sheet to further pull you into the band’s hallucinogenic headspace, further setting them apart from all the bands of that or any other era.

All the unique musical methodologies VOIVOD employs are explored in this initial barrage – diminished chords, unusual intervals and modalities, varying time signatures, the negative space of silence that creates a dramatic vacuum, all setting us up for the next salvo. This was VOIVOD restructuring and elevating their art once again.

After the almost confrontational exigency of the first song, the title track opens up a bit, like some alien flower revealing the beauty that lies beneath. Not that the band eases up on the bewildering amounts of change-ups and curveballs they throw at the listener. Far from it. It’s just that the song flows with uncanny confidence and a feeling of forwarding momentum that is a bit awe-inspiring given the sheer amount of data we’re given to assimilate.

The unexpected decision to include a cover song at this point on the album is a bit perplexing, but it’s a gambit that pays off. “Astronomy Domine” was from the Syd Barrett-era of Pink Floyd and was largely unknown to the vast majority of metal fans, but VOIVOD takes this early prog-rock gem and transforms it into a showpiece of dynamics and drama.

Most record company decisions regarding song selection of singles are suspect at best, but here it was a perfect choice. Somehow “Astronomy Domine” captured the essence of VOIVOD‘s sci-fi masterpiece in miniature form. Snake‘s beguiling monotone envelops us as Away‘s pounding rhythms and Piggy‘s rich array of guitar paradigms dazzle and astonish.

“Missing Sequences” begins with a starkly clean bass line by Blacky, with Piggy sprinkling some of his discordant guitar notes over the top. The antiseptic digital recording of the album is pitiless in its lack of any added atmosphere. It reminds one of the taglines from Ridley Scott’s film classic ‘Alien‘ – “In space, no one can hear you scream.” The decision to go digital on this album was a good one, the sound purposely brittle and untethered from any earthly connection.

The creeping “X-Ray Mirror” pulls us under its influence from the start, a simple low-E string guitar motif building in intensity as the bass and drums join in, Piggy‘s guitar adding extra dissonance with every repeat until we’re struggling for breath. Only when the first verse arrives are we allowed an influx of much-needed air. Piggy‘s echo-drenched guitar lines expand and contract over Blacky‘s ‘Star Wars‘ cantina space funk, the guitarist taking his time to unravel another scientific master thesis in sound.

The robotic march that opens “Inner Combustion” is soon interrupted by the bouncy rock feel of the verse, a recurring theme that worms its way through the entire album. The record shifts seamlessly between abstract riffing and impossible-to-resist grooves that confound and delight. Music this strange really has no right to be so catchy.

Environmental destruction is the focus of “Pre-Ignition“, Away‘s childhood fears of human being’s disregard for our only home the inspiration for yet another unsettling tale. The space-age treatise “Into My Hypercube” is oddly one of the more humanistic moments here, the narrator’s loneliness starkly rendered as he drifts through his inner cosmos. It’s as close to a ballad as we’re likely to get from VOIVOD, and it’s weirdly affecting. The song ends in a galloping race headlong into insanity that is galvanizing and emotionally potent.

Voivod finishes the album with the epic “Sub-Effect“, the song contorting numerous times, the listener struggling to keep up with the number of ideas the band throws onto the conveyor belt throttling towards the incinerator. When the group launches into the musical quasar immediately following Snake‘s declaration, “Too late for S.O.S.“, we’re treated to another ridiculously groovy Blacky bass line. The song builds and builds until we’re completely spent, ready to be placed back into hypersleep.

‘Nothingface‘ is just as much an enigma today as it was when it was released in 1989. The album still feels like an artifact left behind by some alien culture for us to marvel and meditate over. Every song is overloaded with ideas but somehow manages to connect with us on a visceral level, not just a cerebral one. This is a stellar example of a band that was (and honestly, always will be) ahead of their time. If bands are even partially representative of the geographical locales they hail from, Canada must be one strange place indeed.