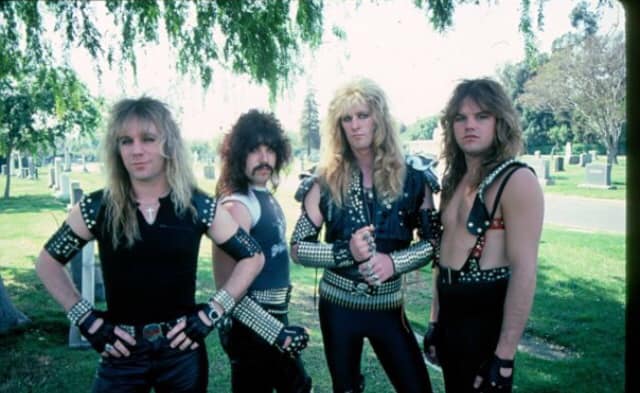 When it comes to putting a spotlight on a tyrant, or in this case a band named TYRANT, there are actually multiple contenders one could pan said light to or from.

Our TYRANT today is the long-running act from Pasadena, California, formed initially as a cover band by bassist Greg May in 1978. However, we could have just as easily gone with pre-Jag Panzer band Tyrant, or the pre-Saint Vitus band Tyrant, or German heavy metallers Tyrant, to name a few other possible Tyrants. Our California-based TYRANT would see a revolving roster of musicians come and go in its earliest days, players like drummer Phil Hilick, vocalist Richard Fuentes, and several guitarists, including Bill Stremmel, Gary Crisp, and Tony Ramirez.

By 1980, TYRANT‘s founder, Greg May, had received invitations to join some of the now-biggest names in metal, ones like Metallica, Armored Saint, Warlord, and W.A.S.P. Needless to say, he accepted none of those, opting instead to continue forging ahead with talented guitarist Rocky Rockwell. By 1982, the pair had partnered with drummer Rob Roy and Greg’s brother, Glen May as vocalist. TYRANT had transitioned to creating original music by this time and ’82 would be the year they shared the first taste of it with the masses with the independently issued 4-song cassette, ‘Demo 1982‘.

Heavy Metal. This is what TYRANT was all about, throttled ferocity delivered via incendiary guitars, nail-driving rhythms, and soaring, banshee style vocals. After playing two shows in Hollywood, Brian Slagel of Metal Blade Records contacted the band about including the song “Battle Of Armageddon” on the label’s 1983 compilation, ‘Metal Massacre III‘. After the release, the label was bombarded with requests from all over the world wanting more from TYRANT, leading to Metal Blade Records signing TYRANT to an international recording contract.

TYRANT ascended to a position of glorious power metal dominion with their Bill Metoyer-produced, 1985 début album, ‘Legions Of The Dead‘, featuring The May Brothers, Rockwell, Roy, and keyboardist Paris Lane. By all accounts, the full-length album was a most magnificent opus comprised of influences from classic NWOBHM bands channeled through solid songwriting and aggressive playing. The album sold incredibly well and landed on Kerrang! Magazine’s “Top 10 Import Chart” for two months straight, while a single, “Listen To The Preacher“, was featured on the ‘Best Of Metal Blade: Volume 1‘. TYRANT was ecstatic at being featured alongside other pioneering metal bands of that period, like Slayer, Trouble, Voivod, Metal Church, and Celtic Frost, among others.

The band reunited with Bill Metoyer for their sophomore album, ‘Too Late To Pray‘, but with some slight changes in their membership. Drummer G. Stanley Burtis and keyboardist Don Atlas had replaced Rob Roy and Paris Lane, respectively. Released in 1988, the second round from TYRANT seemed to resonate with fans and critics better than the original studio introduction had, it propelled the quintet to even higher reverence within the heavy metal community. TYRANT soon toured all over the place, supporting bands like Savatage, Mercyful Fate, and Slayer.

By the early 1990s, the music scene was changing; the rise of grunge had begun, with less and less focus given to heavy metal. A few years would pass before TYRANT took to the studio again, but they eventually did and changes once again took place in the same departments. With new members Tom Meadows (drums) and Jeff Gross (keyboards), the band teamed with Bill Metoyer a third time for the 1996 ‘King Of Kings‘ album, released from Art Of Music. Despite the changing landscape of music, the third studio album from TYRANT gained international praise from fans and press alike.

The changes in the music industry, the growth of the internet, and people’s overall tendencies toward supporting bands, in general, took their toll in the years following this release. Though TYRANT sporadically appeared on tribute type recordings of Black Sabbath, DIO, Scorpions, Judas Priest, Motörhead, etc., their presence would somewhat fade over time. That is, until 2009, when TYRANT returned with all its original members for a reunion show to co-headline the Keep It True XII Festival in Lauda-Konigshofen, Germany.

TYRANT fueled further momentum in 2010, when, with longtime band friend and new drummer Ronnie Wallace on board, they hit the U.S. East Coast with a handful of select shows (including the Defenders Of The Old Festival in Baltimore, Maryland). In recent years, they have continued to play high profile festivals, one of the more recent being 2017’s Up The Hammers Festival in Athens, Greece. Right after this appearance in May that year, TYRANT shocked fans everywhere with the announcement that singer Robert Lowe (Solitude Aeturnus, Candlemass, Concept Of God, Last Chapter, Grief Collector) had officially joined them.

In current TYRANT events, the band is hard at work on their fourth album with (who else?) Bill Metoyer, titled ‘Hereafter‘ and to be released by Shadow Kingdom Records in 2020. The line up within the band alongside Lowe and founder Greg May are Rocky Rockwell and Ronnie Wallace; former drummer Rob Roy passed away in 2019. There is also some up-to-the-minute news to share here today…

The 2020 edition of the New England Stoner And Doom Festival announced the addition of TYRANT to their roster, with bands like Orodruin, Bone Church, Curse The Son, Lotek Cruiser, Red Stone Chapel, Yatra, Irata, and many, many more. TYRANT will perform their new album ‘Hereafter‘ in its entirety, as well as a special “Classic Tyrant” set of songs. Find the full roster, along with further details and information [HERE], and prepare for The Fourth Crusade of TYRANT!