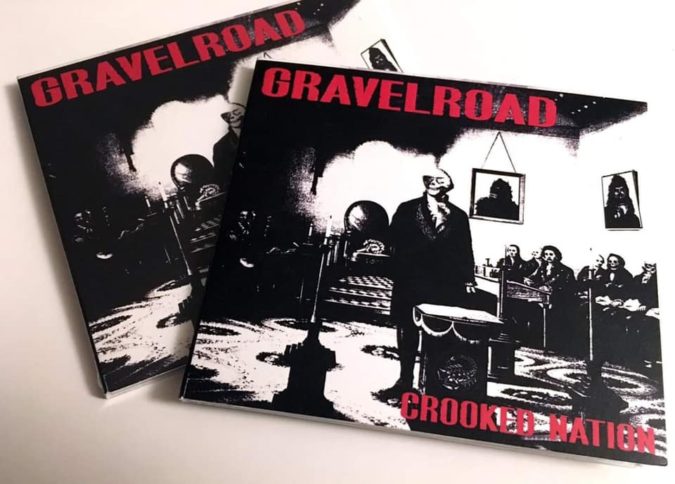 Recorded, mixed, and mastered by Seattle’s own music icon, Jack Endino (Soundgarden, Skin Yard, Mudhoney), ‘Crooked Nation‘ captures some of the most multifaceted audio yet from GRAVELROAD. Experimenting with a wide variety of new vocal and studio techniques fusing the band’s raw drone styling with a more standard fuzz-rock approach, the results must be heard to be believed. Rich with rhythm and blues components throughout, this potent, electrified elixir is permeated with an abundant groove made to move listeners.

With the band’s uniquely distinguishable sound derived from a weave of guitar players – who also share lead vocal duties – with a high energy rhythm section, GRAVELROAD more than validates their numerous accolades. Honing their chops since 2003, and touring outside the U.S. regularly since 2014, the time is right for the return of this most impressive, highly talented rock act. As it happens, one that was handpicked by blues legend T-Model Ford to be his backing band from 2008 until just prior to his death in 2013; and where they recorded two highly-praised albums with T-Model Ford: ‘Ladies Man‘ (2009) and ‘Taledragger‘ (2010).

“Crooked Nation Blues” (streaming) is the first single shared from the album, released in Europe this past September. Along with it, the ‘Crooked Nation‘ album artwork and details are also included below; it is set for release on January 31st from Knick Knack Records.

A1. Got Me Movin’
A2. Crooked Nation Blues
A3. Got You On My Mind (feat. Dustin Arbuckle on harmonica)
A4. Hey Hey Hey
A5. Downtown (feat. Kellie Everett on saxophone)
A6. OC

B1. Cosmic Flowers
B2. Come Back Baby
B3. What’s In A Name
B4. Brown Treasure
(feat. Kellie Everett on saxophone)