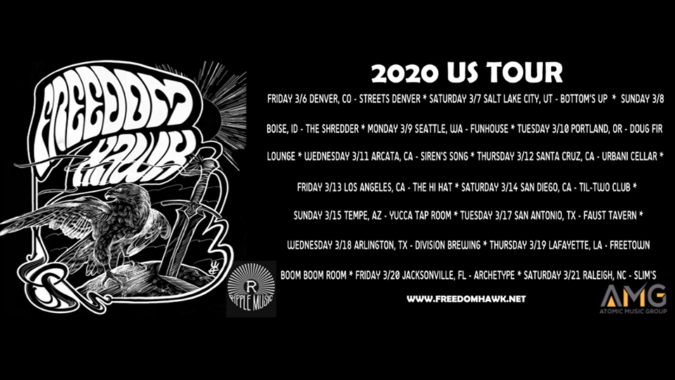 Coastal Virginia’s deliverers of dune rock, FREEDOM HAWK, have announced a U.S. road trek is finalized and set to occur this Spring.

The FREEDOM HAWK four also hint at the possibility of playing a few new tracks from their forthcoming Ripple release sprinkled in for good measure. More live dates are expected to be scheduled soon, while the yet-to-be-detailed new album should arrive later this year. The band offered the following comment about the new material, saying:

“We are really excited about the new tunes coming together. The material seems to capitalize on our previous work but really expands into newer territory of tasty bluesy melodies, driving harmonies, and killer song structures that have hooks for days…. We feel like this is our best stuff to date. We can’t wait for people to hear it!”

Formed in 2005, FREEDOM HAWK played their first show in 2006 and self-released their first album, ‘Sunlight‘, in 2008. Self-titled sophomore album ‘Freedom Hawk‘ came the year after, 2009, followed by 2011’s ‘Holding On‘, and ‘Into Your Mind‘ in 2015. In their 15-year existence, FREEDOM HAWK has developed a reputation for no-nonsense rock and roll, the kind created by heavy riffs, rolling grooves, and soulful psychedelic melodies.

Find the itinerary for the upcoming FREEDOM HAWK “2020 U.S. Tour” listed below, along with the title track official video of the band’s most recent album. Tickets are available [HERE].