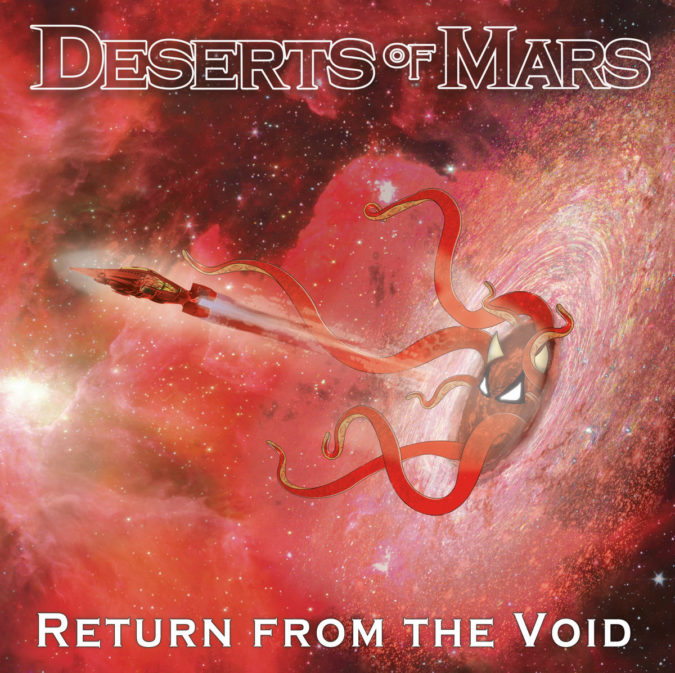 “The stars align… Our voices rise… / Our spirits cry out… Raise the pyramids!“

And so goes the first chorus in the first song, “Raise The Pyramids“, on DESERTS OF MARS‘ December 2019 released ‘Return From The Void‘ EP. Return indeed, with plans and mission statements of renewal, rebirth, and regeneration, necessities for the survival of man… and band.

From the rouge seared plains of 2006 era Austin, Texas came the early DESERTS OF MARS, a sonic fueled exploratory ship founded by bassist and vocalist Tony Salvaggio. Fitted with a different crew at that time, that entity of untethered cosmic rock delivered the phenomenal full-length outing ‘Transmission‘ in 2011. The album made more than significant headway with fans of heavy music, its embodiment of densely fuzz-enriched, psyche-tinged stoner rock capturing their imaginations.

It was in those years that we learned about the origins of these off-earthlings, their beginnings on Mars, and their reassignment to the third planet, Earth. While here, they mastered certain instruments, ones that allowed them to translate their tales of interstellar adventure into audio compositions. In time, new explorers would come to commune with DESERTS OF MARS and in Earth Year 2019, new membership was dispatched from their home planet.

The riff generator Bradley Barnes (guitar) took his vows and was sworn into this noisy force of space rock supremacy, alongside Salvaggio and propulsion master Morgan Faber (drums). The trio’s own admitted goal, the driving initiative behind them, is “…to create Mars Metal that rocks the universe.” Toward the end of last year, these displaced Martians delivered the next salvo in intergalactic communication, the aforementioned five-song ‘Return From The Void‘ EP.

A meteoric movement, the EP is an extremely feel-good finessing of heady excessiveness laden with deep grooves and imaginatively inspired lyrics. The start-up song referenced earlier, “Raise The Pyramids“, is a sky streaking craft constructed around intensity and purpose. It is driven mostly by elevated timing and quickened tempos but does occasionally throttle down to a gliding speed.

There is a neat trick-taking place here, one that I instantly recognized after my first full listen to this short-player. This wired-for-sound trio has taken a broad spectrum of influences from a variety of genres and morphed them into something all their own. However, they cannot escape that recognizable Texas twist on their output, something they share with such acts as Mothership, Wo Fat, Venomous Maximus, or Duel. If you have a discerning ear, you cannot miss it in cuts like “Black Leather” or “Journey” (both songs happen to feature guest vocal contributor Rain Nox).

Then there is “Your Altars“, a song heavily laced with atmospheric nuances, both musically and vocally, interspersed between passages of a more aggressive nature. The placement of these alternating transmitting strengths complements one another, calming one minute and combusting the next. It is a process applied in another powerhouse presented here, “Everything (But You)“, one of my personal favorites.

DESERTS OF MARS continue their upward trajectory with the ‘Return From The Void‘ EP, a dual-purpose record that’s as much a return as it is a reminder. Extraterrestrials are here on Earth, based in Texas, and conducting experiments in audio. Are they mutilating cattle or abducting people, taking them who knows where, and possibly probing them? Very highly unlikely… in fact, I’ll answer with a hard “NO!”; but what they are doing is preparing to subjugate humans with some damn fine heavy rock, and the second wave is here.

Take your own trip off-planet with DESERTS OF MARS and their ‘Return From The Void‘ EP, available for streaming in this review or ready to rocket ride at Bandcamp [HERE].