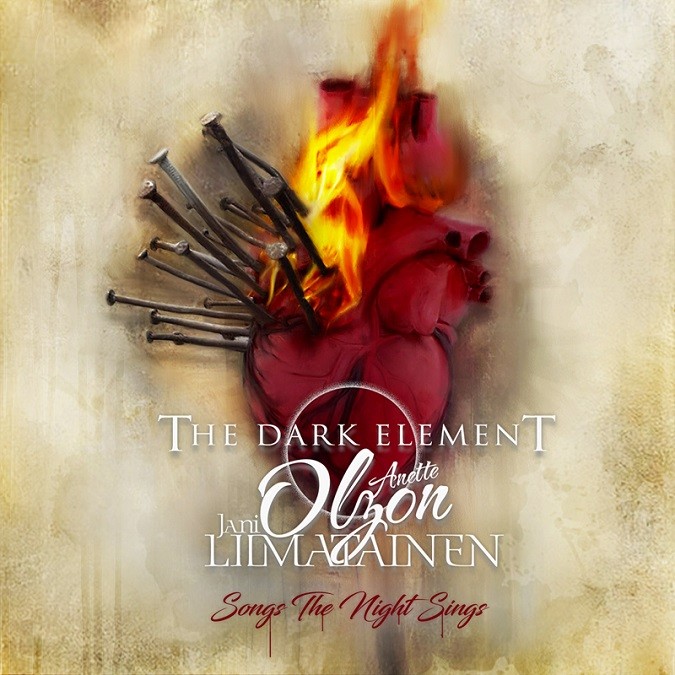 A sophomore project is where you really expect things to gel for a band. A debut serves to find one’s footing, to establish a sound, but by album number two, those aspects should be firmly in place and flourishing.

That’s definitely the case with ‘Songs the Night Sings,’ the second album from THE DARK ELEMENT – the project by ex-Nightwish singer Anette Olzon and Finnish guitarist-songwriter Jani Liimatainen, with Jonas Kuhlberg on bass and Rolf Pilve on drums.

Nightwish made a big musical mark on the two, obviously, and let’s say this album bears those marks very clearly – the big orchestral riffs that establish the melodies, the driving rhythms, the multi-layered arrangements, Olzon is her own singer, though, not operatic, but boasting a strong, true soprano that is steady and emotional throughout.

As Tuomas Holopainen does in Nightwish, Liimatainen writes all the material for THE DARK ELEMENT. But he gets his singer/interpreter Olzon really well, creating lyrics that seem to reflect her personality, her travails, her worldview, as well as his own.

Like the very pointed opening track, “Not Your Monster,” for instance. It could be referring to a relationship, but it doesn’t take much imagination to see it as a direct comment on Olzon’s unceremonious dismissal from Nightwish (which occurred very early in the tour supporting her second album with them, ‘Imaginaerum‘) She acknowledges her part, “I might be a monster,” but comes back with “But not your monster anymore.” She says, “I was thoughtless,” but adds, “Never that cold and heartless.” She says, “I did write you a love song,” but snaps, “You got the words wrong.“

It’s fairly clear how she might feel in hindsight – “In the end we /Gave birth to a hopeless dream /We had it all but prestige /I have grown to hate our child” – and she seems to comment sharply on her less-than-satisfying role in the band (“I was not the magician /But the assistant“). It’s ironic that she played a part in Nightwish’s kiss-off song to Tarja Turunen (“Bye Bye Beautiful“) and now she gets to have a say in her own admittedly harsh treatment.

The title track is a deeply personal observation about life’s journey – “Leave behind little town where I once swore /I will never die here,” and wanting to experience everything, good and bad – “I wanna live the stories I write /See the whole world with my own eyes /Take the unknown trail /And hear the songs the night sings” and “I wanna feel, the flame when it burns /Wanna feel the pain when it hurts.“

“When It All Comes Down” could be about a loved one coming to the end of life. Its big, cathartic chorus is reassuring, but filled with agony and the inevitability of loss (“Let me ease your pain /When the bells they chime /Walk with you for this one last time“).

“Silence Between the Words” shows someone resigned to a breakup. Mature and reminiscent and regretful, but not angry, it contains clever turns of phrase (“Now here we stand, there is nothing left to burn /And I’m out of cheeks to turn“) and a very simple but effective sentiment in the first line of the chorus that really says it all in such a situation: “the meaning is found in the silence between the words.“

The frantic “Pills on My Pillow,” a possible look at mental illness, boasts some more very nice lyrical plays, like “Tell me how I could convince you /Of the visions I’ve conceived /I’m the modern-day Cassandra /Always heard but not believed /Not even by me” – Cassandra, of course, being the prophetess of Greek mythology whose predictions were true, but never heeded. The metaphor of “My head is a battlefield /And here the good are losing” is that desperate attempt to hang on to sanity.

“To Whatever End,” full of pain and hopelessness, is trying to hold on to a relationship that’s just not worth it. The bridge is just devastating – “I will burn all the hopes I was tending /Keep on walking the road never-ending /I will learn what I’m worth and I’ll know that /I was not meant for someone like you /Should’ve known that the gown wouldn’t be white /And the burden of you wouldn’t be light /And for all that I do I can’t help it /You will not fall for someone like me.” I mean, come on, that’s just heartbreaking, wrenching, really powerful emotional stuff.

“The Pallbearer Walks Alone” is potent commentary, telling of things we shouldn’t do but we do (“there are calls that just shouldn’t be made /but we’ll make them anyway“) and that we’ve made progress, but not nearly enough (“One day no child will be left behind /One day no young boy will march to war /One day no old man will die alone /But that day is not today“). Olzon herself acknowledges this when she says wryly, “There are songs that shouldn’t have to be sung /And I guess this is one.“

“Get Out Of My Head,” which at times has a certain techno-dance feel, tells of a self-centered lover who only thinks of themselves and she’s had enough. Snide and demanding, she tells off this draining, soul-sucking loser. But the delicate and airy “If I Had a Heart” puts the shoe on the other foot – this time, she is the bad guy (“If I had a heart /It would surely break /And if I could feel /I would be ashamed“).

The sweeping “You Will Learn” is full of the wisdom a parent would pass to a child – “You will learn what you are /It will hurt, but you will learn,” for one. It’s insistent but tender, full of love; the ending is glorious and optimistic.

I was thrilled by the smoky torch-song closer, “I Have to Go.” It’s as good as “Slow, Love, Slow” from ‘Imaginaerum,’ and tells the old story of the musician who finds his or her person that they connect with perfectly, but their nomadic lifestyle doesn’t allow it to be permanent. It’s terrific.

This album is leaps and bounds lyrically beyond their debut, a crop of really good strong songs, extremely well crafted and executed, and one of my best of the year.

THE DARK ELEMENT will hit Rockfest in Tampere, Finland in June 2020. You can order ‘Songs The Night Sings‘ in various physical formats through Frontiers Music s.r.l. or via digital streaming.