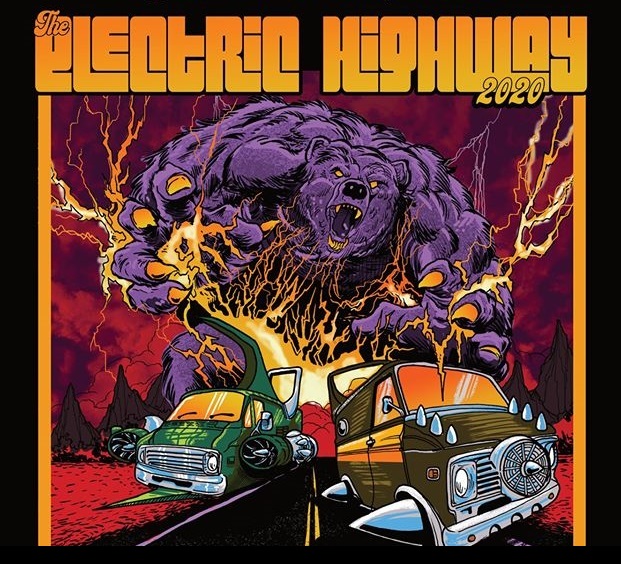 Riff Relevant is honored to be included among the many sponsors for The Electric Highway Festival this year! Having now completed its 2020 lineup with the addition of the mighty Mothership from Dallas, Texas, and Vancouver’s Empress. Both Mothership and Empress will be performing on Saturday, April 18, 2020. That brings the total number of bands performing during the festival up to 22 over the course of the full two days.

The Electric Highway Festival is quite excited about its official artwork, too! Created by the renowned, dark surrealist David Paul Seymour, an internationally known illustrator based in Minneapolis, MN. He has created artwork for Municipal Waste, Conan, and Mastodon, as well as Shadow Weaver and Wo Fat, who are both performing at the festival in 2020. David Paul Seymour is also one of the driving forces behind ‘The Planet of Doom, an Animated Tale of Metal and Art’ and the creator of the ‘Kumasan’ comic series.

The full 2020 lineup brings an electric offering of North American bands, featuring headliners Sasquatch and Wo Fat laying down their brand of fuzzy, kick-ass desert rock and heavy psych. Duel (Austin, Texas) will be playing Canada for the first time at The Electric Highway Festival, along with Hippie Death Cult and LáGoon – both from Portland, Oregon. Festival favorites La Chinga return from Vancouver for their fourth appearance, and Calgary’s Gone Cosmic, and Buzzard from Victoria, B.C. are just a few more of the wicked bands that will be playing on two stages over the two days.

The Electric Highway Festival has also partnered with the Veterans’ Association Food Bank of Canada this year. Incorporated in September 2018, as a Not for Profit Society, the Association is designed to relieve poverty by providing food and basic, fundamental needs for Veterans and their families. The goal is to promote a stable environment for Veterans affected by loneliness, isolation, addiction, mental health or other health-related issues with peer support programs and social activities. The Association provides a safe and welcoming environment for all Veterans, building a community of Veterans helping Veterans. The Festival will be collecting donations of food, cash, and various other items which will be donated to the organization.

As a fully immersive experience, The Electric Highway Festival offers more than just music. The festival also features an art and vendor exposition during both days at The Legion, as well as a pinball tournament at Pin-Bar, April 18th, 2020.

The Electric Highway Festival is also getting the whole thing started with a Kick-Off Party on Thursday, April 16th, 2020 at The Palomino Smokehouse & Social Club. This killer line up features Seattle powerhouse psychedelic doom duo Year of the Cobra, joined by Calgary’s Bloated Pig, Outlaws of Ravenhurst, and newcomers Falcotron along with Red Deer’s Smoothsayer.

All Two-Day Festival Pass holders can pick up their wristbands a day early at The Electric Highway Festival Kick-Off Party. This kick-off event is free for festival pass holders, or $13 at the door for non-pass holders. Space is limited so get there early!