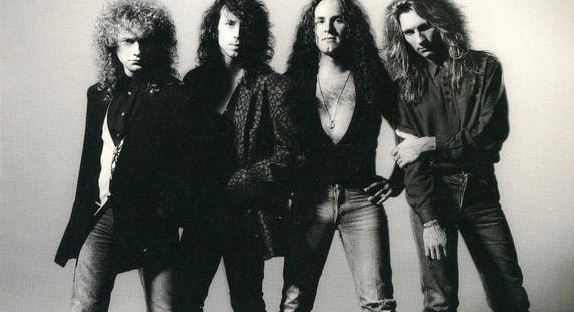 To hear most of the accomplished and successful musicians tell it, most band efforts are a struggle; a true test of ones’ makeup and resolve.

We all know of numerous ones that eventually made it, where they sat on top of the world – until many of them somehow managed to piss it all away. Thankfully, that scenario has nothing to do with our subjects today, ones you may or may not recognize by their name, SHADOW KING.

If you don’t have a clue, well, I’d about bet my bottom dollar that you will know some members of the band once you’ve heard their names. Let’s see about that… as we warp speed it back to the start of the last decade in the last millennium, May 1990 to be exact. Foreigner vocalist Lou Gramm had just released his second solo album some months prior and decided it was the right time to exit Foreigner, and does so. He went on to tour for his sophomore release and when he returned, he found the right guys to launch a new band with.

Completing the roster were drummer Kevin Valentine (Donnie Iris & The Cruisers), and two players who had contributed to Gramm’s solo albums, bassist Bruce Turgon (Foreigner) and guitarist Vivian Campbell (Def Leppard, Last In Line). What we had here was the makings of a bona fide “supergroup” and the sky was the limit as to what they might accomplish in time.

They began with some songs already being worked on by Gramm and Turgon, intended for an eventual third solo album from Lou. Gramm and Turgon worked well together, having done so in Foreigner for several years, but their history of collaboration predates Foreigner. The pair played together in a band called Black Sheep during the early Seventies, where Lou began as their drummer, only to make the switch to lead singer in time. With this leg up from the long acquainted pair of songwriters, the quartet was ready to get into the studio and record.

SHADOW KING soon did that with producer Keith Olsen, who had previously worked with Gramm when he produced Foreigner’s ‘Double Vision’ album. The self-titled ‘Shadow King‘ album was released through Atlantic Records in early October of 1991, where it went on to produce only one single, “I Want You“, as well as a music video for the song.

The band began to make plans for a tour, but it seems fate had other plans in store, as SHADOW KING performed live only one time. Joined by keyboardist and backing singer Rick Seratte (Whitesnake, Foreigner, Poco), SHADOW KING appeared at the Astoria Theater in London, England, on December 13th, 1991. Shortly afterward, Vivian Campbell announced he was leaving to join Def Leppard. Although replacements were considered, the band members eventually went their separate ways, with Gramm and Turgon rejoining Foreigner in 1992.