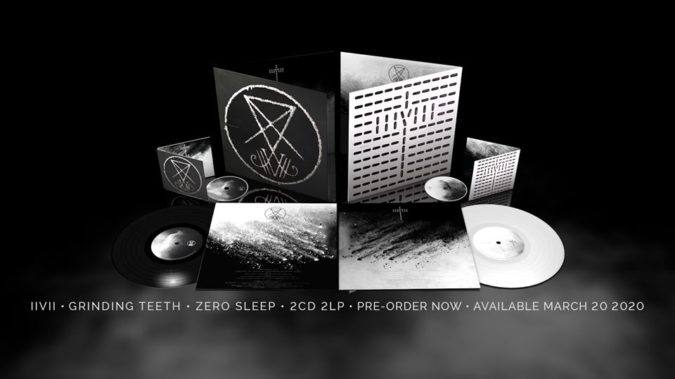 IIVII, the current project of former Neurosis visual artist Josh Graham (also of A Storm Of Light), has announced the March 20th arrival of a new double album via Consouling Sounds.

The immensely ambitious ‘Grinding Teeth / Zero Sleep‘ are individual recordings, yet together, they reveal a symbiotic-like union. This was expounded upon by Josh Graham in comments recently, where he stated:

“Grinding Teeth and Zero Sleep are individual albums that work together, exploring the grey areas between black and white, light and dark, life and death, good and evil, truth and fiction.”

Accompanying today’s announcements are the artwork and credits for each of the albums, along with a visual presentation of the haunting “Sun And Solace” from ‘Zero Sleep‘. The following is extensive, further insight into the premises behind each individual album’s aural contents:

“Grinding Teeth” – The inspired soundtrack to the true-life love story of Duane and Debra Johnson.

Battling multiple health and mental illness issues, Debra Johnson asked her husband, Duane, to remove her from a medical facility so she could die at home. Over the next 5 days, they had an extended “death party;” smoking methamphetamine, listening to Quiet Riot and having sex. After Debra died in Duane’s arms, he wrapped her in linen and called the police. When they arrived on scene, Duane was standing naked near the front door, screaming that his wife was dead. The words “Death Parde God Hell” were spray-painted across the door.

Touching on themes of love, death, drug use, sex and criminality, Grinding Teeth features guitars, drums, electric violin and cello, lap steel, and electronic instrumentation. The album cover for ‘Grinding Teeth’ uses “crystal meth” arranged in the form of Lucifer’s sigil. This imagery plays off of Duane’s spray-painted door and works as a contrast to the ‘Zero Sleep’ cross, while also referencing the surreal darkness of this story.

After humanity loses its ability to sleep, mass displacement ensues. Unnamed black pills are distributed to the people by governments at camps around the world. Highly controlled and coveted, these pills provide the only possibility of sleep; while an overdose of the pills opens up an unexpected path to salvation.

Touching on themes of hope, despair, love and liberation, ‘Zero Sleep’ features a live string trio, live vocals, and electronic instrumentation. The album cover for ‘Zero Sleep’ uses black capsules arranged to form a surrounded cross. The pills symbolize a path to sanity and salvation, huddled around their symbol of hope.”