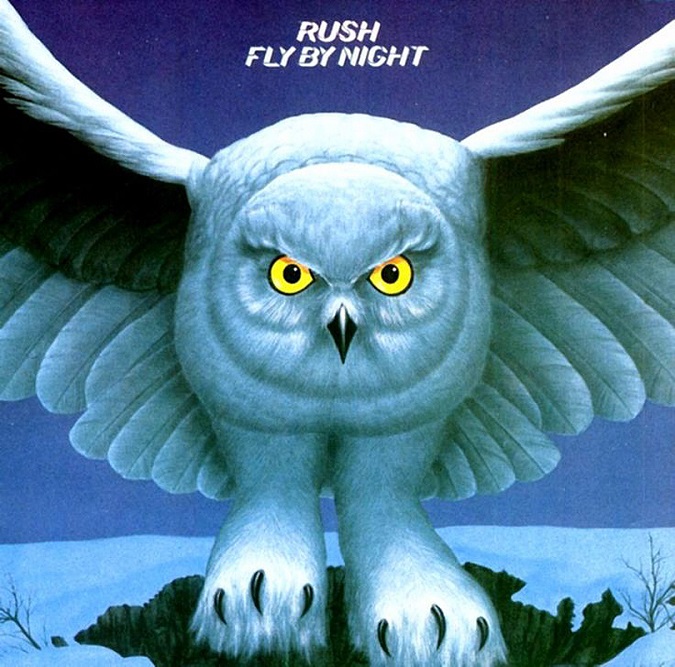 Some things are just meant to be. After the unfortunate necessity of RUSH having to part with original drummer John Rutsey arose, Geddy Lee and Alex Lifeson were set on a collision course with their destiny in the form of one Neil Peart.

In possession of superior musical chops and a taste for writing insightful, even profound lyrics (something Geddy and Alex had neither the desire nor the acumen for at the time), Neil was the missing piece that unlocked all the magic these three men were capable of. They instantly went from being a Led Zeppelin clone (albeit a supremely talented one) to something that was as novel as it was grand in scope. RUSH morphed from a boogie band singing about another Saturday night out with the boys to a unit capable of examining political and social issues, philosophy, even the cosmos itself.

“Anthem” opens the ‘Fly By Night‘ album with a supercharged drum pattern, announcing Neil‘s arrival, but also locking in effortlessly with his teammates, the instruments churning away deliciously. The lyrics, which draw from the writings of Ayn Rand and have been the spark of endless debate as to where Neil’s politics actually resided, are above all thoughtful and worlds away from what came before. This was a band for music and philosophy nerds alike to extrapolate and excavate the meaning below, all wrapped up in instantly memorable songs aided by superior musicianship.

“Beneath, Between And Behind” still has some Zeppelin lurking in its bones, but by the time “By-Tor and the Snow Dog” rears its head, it’s clear that something new was afoot, the band unveiling its first of what was to be many epics. Neil‘s magnificent drum sound (achieved with the help of ace producer Terry Brown, who would soon become inseparable from the band’s studio output) drives a song full of Alex‘s wiry riffing and Geddy‘s mid-rangey, growling bass.

The mondo-bizarro middle portion of the song was an early signpost for the more obscure locales RUSH was heading towards on ‘Caress of Steel‘. The remainder of the song is full of syncopated ensemble riffs, quiet downshifts into more ethereal realms, and searing blues guitar soloing. Not bad for a song that, as legend would have it, owes its inspiration to their manager’s dogs.

The title track is bright, almost cheery. In fact, the entire album remains one of the more “happy”-sounding albums in the band’s discography. There’s a bounciness to the songs creating an “in” for more casual listeners who might be intimidated by all the serious topics and musical minutiae that would soon become part and parcel with the RUSH persona.

“Making Memories” looks at the bright side of touring, a good outlook considering that it would be a large part of their existence for the next 30+ years. It’s an unusually airy tune for the band, but even on minor works we’re given something to take away, in this case, the lone example of slide guitar on a RUSH recording, and Alex sounds like an old pro at it.

Tolkien’s influence first makes its presence known on “Rivendell“, the gentle guitar arpeggios of Alex accompanying Geddy‘s soothing vocals (a quality not often associated with his take-it-or-leave-it singing approach that characterized the early years). We end with, fittingly, “In the End“, a song full of dynamic shifts, pointing us to the larger world we would soon be introduced to on future RUSH releases. The brash chords that follow the opening reveries offer up a clear demarcation between what came before and what was to come, almost declaring that roman numerals in song titles would soon be in the offering. But despite all the grandiosity, there’s surprisingly little navel-gazing going on. The music, no matter how ornate it becomes, remains anthemic, and at points damn near majestic.

Though they would struggle to find a wider audience until the uncalculated, wondrous popularity spike of ‘2112‘, RUSH showed their true colors here, and they were bright, beautiful, and too vibrant to be constrained. Chemistry is all about reactions, and when these three men united it was positively explosive in its creative exuberance.