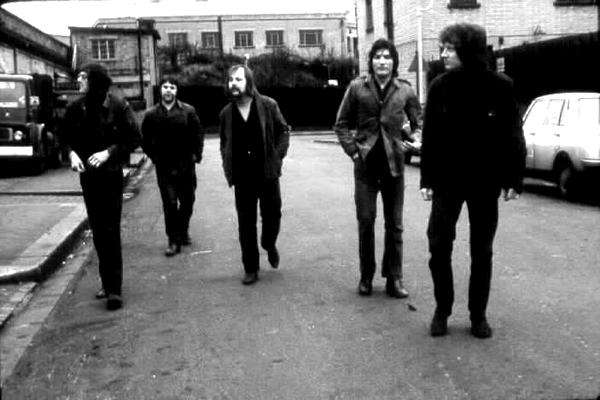 We find ourselves in London, at the arrival of the Seventies, where many things are happening in the world of music that reflects events in the real world.

The hippie subculture of the Sixties produced a plethora of fantastic bands and music of course, but that decade is over. What lied ahead had little to do with love and peace. One of the best examples to embody this shift in the sonic fabric took the name THIRD WORLD WAR in 1970. The band resulted from the desires of one man really, manager and producer John Fenton, who was not a member but had been quoted as saying: “I want a no-bullshit, working class band… I’ve had enough of all this pseudo peace crap.“

Musician friends of Fenton’s, guitarist and vocalist Terry Stamp, and bassist Jim Avery, heard the subtle call voiced by their pal. THIRD WORLD WAR was proclaimed to be and features a roster completed by lead guitarist Mick Lieber and drummer Fred Smith. In 1971, the band released its first, self-titled album through Fly Records, an LP where the quartet was joined by pianist Tony Ashton, trumpet-playing trombonist Jim Price, and saxophonist Bobby Keyes – American musicians from the Rolling Stones’ horn section.

The music of THIRD WORLD WAR was quite a unique item at the time, it was definitely gritty, blue-collar rock and roll. It had very little in common with the psychedelic holdovers hanging by a thread at that point, it was more akin to Iron Butterfly, Highway Robbery, or Steppenwolf. Altogether, this was aggressive music, highly charged and laden with radically subversive lyrical themes. As a whole, it was explosive, so much so that some will later dub it “proto-punk”.

At the time the eponymous album was released, THIRD WORLD WAR had yet to play live. In the summer of 1971, Avery and Stamp reconfigured the group to get what they felt was the best possible version for live purposes. This consisted of the two, along with John Hawken on piano, John Knightsbridge on lead guitar, and Paul Olsen on drums. This second version then toured Finland, where they played 35 gigs in 30 days, and then went on to perform at a number of festivals across Europe. Before 1971 was over, the band utilized Fly Records once again for the release of two singles, “Ascension Day” / “Teddy Teeth Goes Sailing” and “A Little Bit Of Urban Rock” / “Working Class Man“.

By 1972, the management at Fly Records was becoming increasingly unhappy about what they saw as the band’s lack of commercial potential. This dissatisfaction comes to a head when THIRD WORLD WAR began to record their second album and the label is dead set against the inclusion of a particular song. “Coshing Old Lady Blues” is viewed by the label honchos as a clearly defined obstacle towards garnering even the hope of mainstream acceptability for the band.

Band manager and de facto founder Jim Fenton refused to see the ‘Third World War II‘ album released without the track. Both parties’ refusal to budge became a stand-off between them, and while not totally clear as to how this became an option, The Who’s label, Track Records released the album (song intact). Personnel on ‘II‘ were the exact same players from the live touring version of THIRD WORLD WAR with one exception, drummer Craig Collinge had replaced Paul Olsen.

Unfortunately, this sophomore record was a swansong for the band, as all reserve monies had run out during its recording. Unable to compensate the musicians any payment for their work, they do finish its recording, but upon doing so promptly disbanded THIRD WORLD WAR.

In the decades since, the reverence for THIRD WORLD WAR and their pair of trailblazing albums has increased and grown unabated. A wide array of well-known bands and established musicians have voiced their admiration for them, including Joe Strummer (The Clash, Big Audio Dynamite, The Mescaleros) and Henry Rollins (Black Flag, Rollins Band). Today, many people matter-of-factly proclaim THIRD WORLD WAR to be the “first punk band” ever, while the highly praised players have involved themselves in numerous other bands and their own solo artist careers.