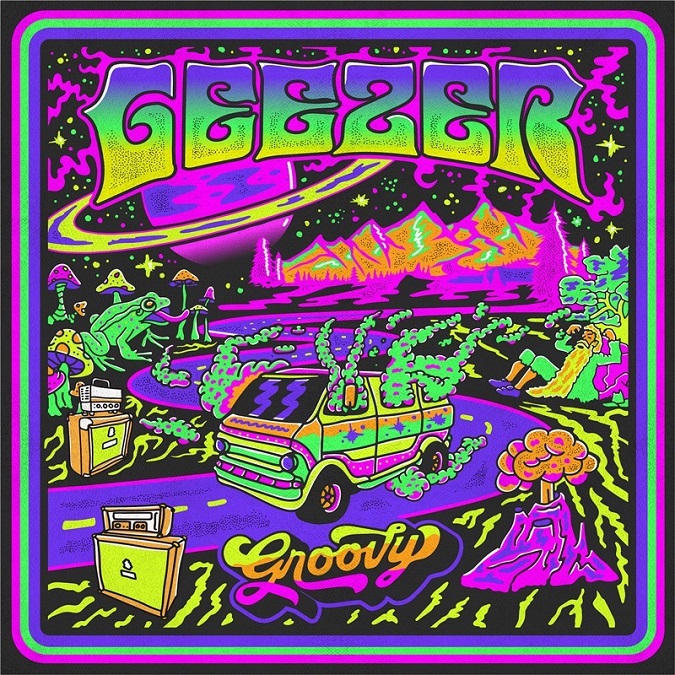 The band also has finished their new album, ‘Groovy‘, their first for Heavy Psych Sounds, but the fourth full-length in a long line of well over half a dozen releases since their inception in 2012 (not to mention multiple appearances on various compilation releases). ‘Groovy‘ will be released on May 22nd, and the pre-order for the record is open now. GEEZER comments on that new collaboration:

“Geezer has been honored to work with some of the best record labels in the stoner rock world. That being said, one look at the roster of Heavy Psych Sounds and it’s easy to see why they are the right label for us right now. Whether it’s the legends of the genre like Brant Bjork, Nebula and Yawning Man, or the new generation of bands like Black Rainbows, Ecstatic Vision and Duel, Heavy Psych Sounds reputation speaks for itself. Geezer is looking forward to earning our place among these titans of the riff. Inhale the groove, keep it heavy. Dig.”

The new ‘Groovy‘ album was produced by Pat Harrington, recorded and mixed by Matthew Cullen at Darkworld Studio, and mastered by Scott Craggs. We’re all definitely in for a treat when hearing ‘Groovy‘ in its entirety this May, but today we’re sharing a video below for the first single “Dig“.  I had the absolute pleasure to sit in with the band on one of their recording/mix sessions at Darkworld and heard a few of those surreal “Dig” strums from Mr. Harrington first hand (and got to pet a big groovy studio doggo in the process). Some details from the band about the new single:

“Dig is the first single off Geezer’s upcoming album Groovy. It is the song that sets the tone for the rest of the album. The groove that sets the pace & the riff from outer space. A hook that makes you dance and induces a psychedelic trance. A protest song to piss off the man. Can you dig it? Yes you can.”

“We spent the better part of a year jamming, developing ideas and fine tuning arrangements,” Harrington informs. “This is the first time since the self-titled record that we took the time to really flesh out song structures, tempos, etc. I always talk about the ‘three pillars’ of the Geezer sound: heavy, trippy and groovy. With this album, some songs are heavy, some are trippy, but they ALL had to be groovy.“

Regardless of tempo, mood, or any other theme that might show up in the songs, ‘Groovy‘ is a love letter to groove itself, and in paying that homage, GEEZER has discovered the truest reality of themselves yet. Whatever else groovy is, it’s them. It will be out on May 22nd, and available to pre-order now in the following formats:

GEEZER has upcoming festival dates, including Spider Ball 2020 and Stoner Jam ’20 – both next month (March) in Austin, Texas. Their album release show in May is a pretty spectacular event itself, happening at none other than the Heavy Psych Sounds Fest in Brooklyn, New York. All three events have some mind-blowing rosters of bands for their respective lineups, so don’t miss out if you can get your asses to any one of these music festivals. Check out the info, listen to the new “Dig” single below, then pre-order the ‘Groovy‘ album now through Heavy Psych Sounds.