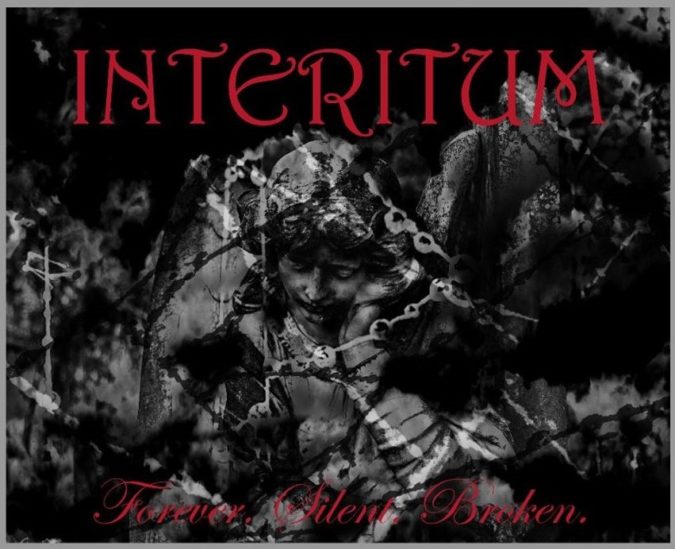 ‘Forever. Silent. Broken.‘ is a 9-song demonstration of how doom, the type rich with groove and weight, is done way down under. These things were hinted at upon the band’s initial EP release, 2017’s ‘Conformed Suffering“, but now all is revealed. Together since 2015, INTERITUM – Kel Barrett (vocals), Jarrod Gaye (guitar), Jack Hrycyszyn (guitar), Trent Barrett (bass), and Paul Wallace (drums) – have generated a lot of buzz in the underground in recent years.

Now armed with this independently released album, our fatalist five make an unwavering sonic statement, one that demands your attention. Opening track, “Submerged“, is the means by which your notice will first be drawn unto them. The song explodes in such a way one’s blood pressure is bound to jump up briefly, as the calm and silence are shattered and shed for the duration. Oh, did I mention this is a doom METAL band, because uhm, yeah they are, as evidenced here.

With mountainous riffs avalanching upon you and rubble rendering rhythms shuddering in place, the bluesy, singing powerhouse Kel punches in. This is an equation that renders balance between density and intensity, with an immensity of both found in songs like the traditionally dooming “Suck My Humanity” or the harrowing “Created And Rejected“.

Other moments within these compositions channel a variety of influences and inflections both, with some passages briefly bringing to mind the nu-metal of an act like Kittie (“Fatal Life“). In others, we find a fatalistic take on the blues (“What Little Is Left“), along with bruising nuances of everything from Cathedral and Bloody Hammers, to Type O Negative and Acid King.

Still yet, there are unequaled moments that highlight this album’s unique, stand-alone numbers where INTERITUM draws it all together with striking results. For instance, “Fractured Mind-Set” is an unleashed free-for-all of mid-tempo heavy metal. Possessing quickened paces, tightly wound rhythms, and swinging drum work, these are more than enough to leave anyone reeling in its wake.

“Righteousness” abounds with a song that has become one of my personal favorites, an ultra-chunky cut with some deep, groove-filled ruts. Coming on like a runaway locomotive, it advances with pushes forward, then pulls back to coast a moment. This is a revitalizing piece, one inspiring your heart to beat a bit faster or your blood to pump a bit stronger. One where the quintet winds it up and wheels it out, everyone doing their part at the appointed time and it is impressive.

But it is not alone in that aspect, for it is the first track in a trilogy of stellar selections making for some of the finest moments here. “Poisoned Tears“, the next-to-last track may be the song with the most to offer, but in a slightly minimalist manner. Oozing to you on tone-rich tentacles comprised of riffs, the earth beneath it rent asunder by this slower slab of stonework.

Nothing but debris remains as the emotive enormity that is the album-closing “Wasted Away” is weathered. There is an ominous feel to things, created by no more than a subdued guitar part in tremolo mode and Kel’s haunting vocals. There is a darkness enveloping us the further we go, yet go we do, ever deeper as ever darker things feel.  There is a depressing element to this, growing and made stronger each second, but before it can consume us, an audio one-eighty takes place. Listeners are bludgeoned with a tactile war hammer of heavy metal for the remaining eighty seconds of this song and album.

With all things said and done, INTERITUM deserves more than a mere passing grade for their first long-player. The album is genre relative to such acts as Windhand or Witch Mountain, yet with copious amounts of a more metal-based centering. It makes for one highly damned enjoyable listening experience to be sure. For you to be sure of that yourself, stream ‘Forever. Silent. Broken.‘ in this review or charge on over to the INTERITUM Bandcamp page [HERE].