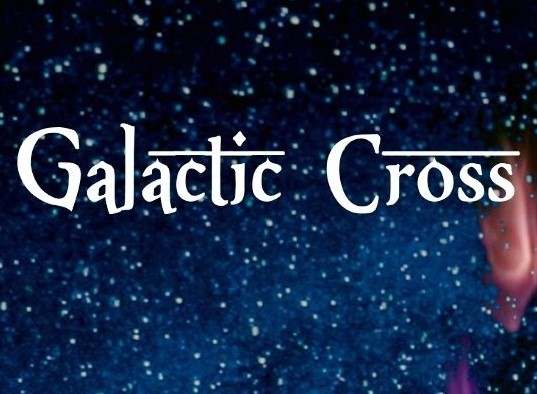 This analysis began to take shape ten months ago, in the world-recognized home of the U.S. Doom music movement – historic Frederick, Maryland.

Pentagram had just obliterated all in attendance of the annual Maryland Doom Fest 2019, and one of the State’s favorite sons, Dave Sherman, and I made our way outside. Not long after doing so, while hanging out, conversation turned toward GALACTIC CROSS, a relatively then-new project occupying much of Dave’s focus at that time. Other than a string of cryptic teases on social media, not a lot else was known outside of its having formed in 2018, its line up completed by guitarist Brian Virts and early Internal Void drummer Tony Saunders (also of Minds Eye) alongside Sherman.

The power trio configuration is nothing new to Dave Sherman, for he has hammered bass and/or handled vocals in a variety of them over the years. His pedigree includes such immensely mythologized ones as Spirit Caravan, and its previous short-lived state as Shine, plus The Obsessed and Black Mass. Then there are the more fleshed-out four, five, or more pieces like Earthride, Weed Is Weed, King Valley, and Bobby Liebling’s Ram Family. So, getting back to that night on North Market Street last year…

Conversation had turned to GALACTIC CROSS when Dave said he had a demo quality track saved on his cell phone if I wanted to hear it. This is no damn time for trick questions, of course I did, so we huddled around this small, eerily lit device and awaited its transmission. It soon began to relinquish the secret it contained and even with my ears ringing as they were, I heard something, a song of some type. It was muddy, sure, far from a crystalline rendition, but it was rocking, rocking in a most retrograde way. I still don’t know what the specific song was, I just recall my giddy blathering and invoking references to Montrose and Mountain.

Little did I know then what I know now, i.e., just how spot-on the mark I was… let me break it down for you. One could say Spirit Caravan was Sherman’s foray into heavy rock, Earthride a descent into doom, Weed Is Weed his stagger into sludgy stoner metal, and Pillbilly a one-off of outlaw southern country. Then it is also safe to say that GALACTIC CROSS is an interstellar engine, powered by vintage style classic rock influences and rocketing into the cosmos.

Perhaps unbeknownst to the three-man crew of GALACTIC CROSS, we are stowed away in the cargo hold amid miscellaneous freight (turntable record players, lava lamps, assorted bongs, and bowls). The first thing to grace our ears once we drop out of hyperspace is the hellaciously kick-ass “Spellbound“. With some infectious funk-imbued, groove-fueled southern blues as its base, a repeating rhythmic cadence is laced throughout. It’s a mesmerizing start to things as Dave’s raspy croon is carried aloft and Virts’ incendiary fret roasts like solar flares.

The groove generator really ratchets up for the start of “Lonely Unicorn“, at times powered by a very Iommian riff. The music is quick to get into a stop, go, rock and roll mode, where bursts of full-on jamming relent to some superb inserts and rolls from Saunders. Then there’s the damnably catchy “Ohhh yeeaaahh, oh yeah.. you’ve been stabbed by the horn / Ohhh yeeaaahh, oh yeah.. by the Lonely Unicorn” choruses. They’ll stab straight into your skull, sink their hooks in, and you won’t be shakin’ that shit anytime soon.

Speaking of, this is where the G.C. three begin to shake things up, setting the heading with the mind-tripping instrumental, “Nominal Confusion“. Quasar laser synths briefly fire like streaks across the celestial sea, before giving way to a very prog-rock style number laden with remarkable Middle Eastern flare to it. The sedate jam’s sans-voice nature provides a momentary breather, and it’s a good thing because we’re going to need it.

Immediately, we find ourselves launched into the careening, quick intensity of the obvious Motörhead influenced “Electric Ghost“. Brought on with a blistering, breakneck rapidity in drums pumping like pistons, reinforced with the bass riveted into place, unrelenting. As if by demons driven, yet in this case, an alternating current-carried wraith, we are dragged right along, taken through accelerating paces.

The opportunity to recapture our oxygen takes the form of another intriguing instrumental, “Interdimensional“. This meandering, acoustic-inflected expression of minimalist musicality roams right along. All the while, wailing guitar licks pierce the stillness of tranquil sedation the song centers on. Make no mistake, t’is the calm before the slow jam storm, “Hollywood Truther“, one importing a damning conviction of the U.S.’ knack for over-sensationalized distortions. This hype is real, no fake blues here as a churning tempest of fuzz-thickened riffs, staggered drums, and Sherm’s signature grit ‘n gravelly vokills unravel this rock narrative.

The next-to-last number, not connected to the movie of the same name in any way, comes with “Queen Of The Damned”. One of the seemingly more experimentally derived compositions, I was deciphering vibes of everything from Led Zeppelin to Pride & Glory, and the earlier mentioned project, Pillbilly. Emanating a deluge of Delta Blues flowing with fluid guitar runs and wafting gusts of drumming, the most unusual trait of the track is the vocals. There are two styles of delivery here with the usual, distinctly Dave ones in place, but their backing accompaniment is where the UNusual is.

There is a higher-pitched, male falsetto falling right in behind the main lead that makes for a slight oddity at points, but nothing that hurts the song. This album will eventually wane and wind down, of course, but not before the Earth and sky are moved with the magnificent title track, “Galactic Cross“. Like that distinguishing namesake, the song is the lifeblood embodiment of the band itself, transmuted into this expression of psychedelic doom. Stitched into it are the audio threads of the past, influences reminiscent of venerable vessels like “Planet Caravan“, or “Going To California“.

Those journeys across the infinite expanse of space and time are the closest to eternity achievable on this side of life. They carry us and carry on, and that’s why this song is a fitting veneration to acknowledge the truest mysteries of Life and Death, Heaven and Hell, and Eternity… or is it in the dirt, you’ll be? It remains to be seen, but for now at this time, at this place, we can dream with GALACTIC CROSS, held within this spectacular musical embrace.

The self-titled debut from GALACTIC CROSS is out now on vinyl LP and digitally at Spotify.