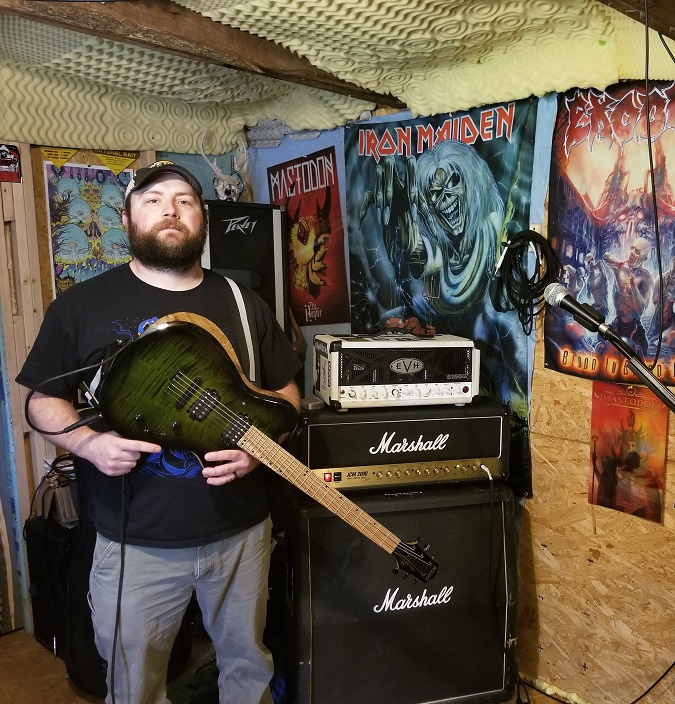 TEMPTATION’S WINGS hails from the Asheville, North Carolina area and have been high on the hotlist of one of our writers, Pat Whitaker, for the past few years. He’s interviewed them, as well as included them in his 2017 ‘Favorites‘ and we’ve also premiered an EP for them in the past, prior to their appearance at the Maryland Doom Fest 2019. Suffice to say, he likes ’em!

You can find out some more about their guitarist Micah Nix below and we’re rather pleased to have him be the fourth piece in the Gear Assembly! Rock on…

I run a few pedals, including a Boss tuner, Frost Giant Electronics Massiff, an Electro Harmonix Phaser, and an Earthquaker Devices Avalanche Run.

My main guitar is a Kiesel SCB6

I had picked around a little on guitar, but knew I wanted to get serious when I heard ‘Master of Puppets‘ for the first time. I was 13.

Of the songs we’ve released, “Mirkwood” is the one that compiles a lot of my influences.

I like to use exactly what I use live for most of the recordings.

…With the exception of an acoustic guitar and a mandolin.

We usually eat at a Mexican restaurant before local shows. Other than that, just some stretching in my old age.

Our jobs don’t allow us much time to tour, so the excitement is still there when we do get to go out. We do change up the set list a bit each night.

It’s always a work in progress. I borrow licks from here and there and try to combine them in an interesting way.

I especially like to borrow from Mikael Akerfeldt (Opeth).

If it sounds good, I like it. I like to do a lot of trading and swapping, but my EVH 5150 III will be with me until it dies.

Back to my 5150. It does everything well, and the channel switching and effects loop are second to none.

I’m a video game nerd and like to fish. Fantasy games and being in nature tend to inspire a lot of my lyrics.

Probably the newest band that has had an influence on me is Khemmis. I’m a sucker for guitar harmony and have finally gotten to bring that element into our music.

Just be yourself. Do what you think is cool. Don’t worry about what everyone else is doing.

And wear your earplugs, so you’re not deaf when you get into your 30s!

We’ve been recording, so luckily it hasn’t affected us too much, yet. It’s affected a lot of bands we know, though. Hopefully it will run its course fast, for a lot of reasons!