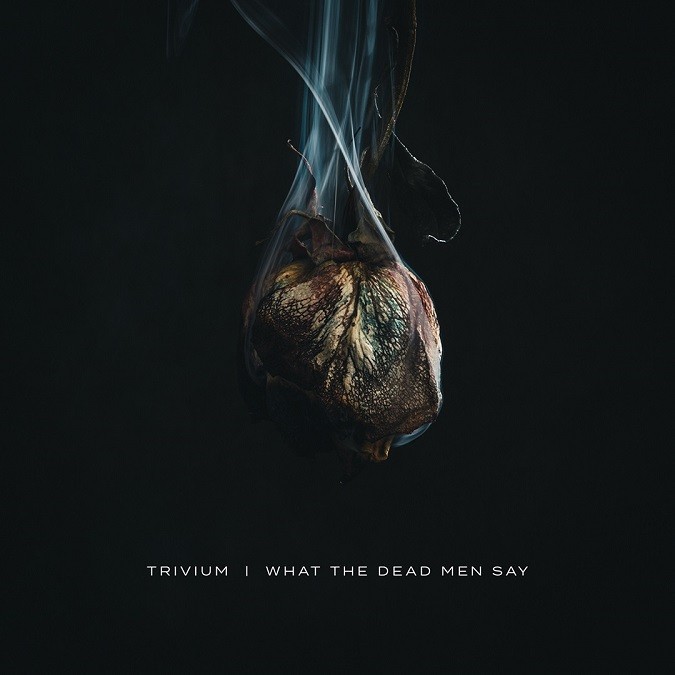 On ‘What The Dead Men Say,’ the ninth album by Orlando, Florida’s TRIVIUM, disparate elements create a cohesive, devastating whole.

Singer / guitarist Matt Heafy said in the band’s bio that they’ve combined all their facets here – melodic death metal, death, and black metal, and hardcore. They spent hours rehearsing and a month in pre-production and did all the tracks in a little over two weeks.

But far from being over-thought or by-the-numbers, this album shows a band – also featuring guitarist Corey Beaulieu, bassist Paolo Gregoletto, and drummer Alex Bent – brimming with self-confidence, in full command of their sound, at the height of their power, and virtually fearless.

The acoustic instrumental “IX” (or, fittingly, “9,” for those who are bad with their Roman numerals) starts things off.

The title track shares its title with a short story by science fiction writer Philip K. Dick, which inspired the main lyricist Gregoletto. It’s majestic and foreboding and tight as all hell with the riffing and drumming. The mix of clean and guttural singing is effective here as throughout, and the jagged, hectic sound of the legato vocals and the blast beats mesh really well. The instrumental bridge is glorious, military, and melodic at the same time, making for a strong, powerful, assertive opening.

Lyrically, it’s kind of a play on “dead men tell no tales,” a metaphor for those things we can never say or never admit to. It also hints at loss perhaps, those things you had shared with someone who has died that no one else will ever know.

“Catastrophist” gradually builds in feel and tempo in the verses, switching back and forth between them, and boasts a lovely main riff. The pre-chorus (“I feel our collapsing/ The arrogant numb to our needs,” which is so succinctly put) leads so brilliantly into that glorious chorus, building suspense and tension with the barest of pauses.

The bridge section changes moods almost entirely but maintains that main melody and Heafy’s vocals adjust accordingly, going to a death metal scream that takes the chorus from sublime to pissed off, which is a clever touch and one that’s revisited at the end. A proggy twist again plays off the initial feel. It’s a long track, but it’s supremely listenable because it does the unexpected, especially in that it doesn’t allow you to get too complacent with that addictive chorus. It’s just perfectly constructed.

This one does have a more external political bent – “Consume and feed, degenerate/ We damage just to liberate/ Bought and sold before we could even breathe” – that is to say we’re programmed early on to consume and be marketed to.

“Amongst the Shadows and the Stones” is pure furious death metal. The chorus repeats twice, but the second run-through changes ever so slightly with the drumming and the groove, which is well done, and the last time they do it, they switch the order. They love those little tricks that engage the ear.

This seems to be about becoming desensitized – to poverty (“Dying mother forced to reconcile/ A hellish landscape just to feed her child“), to conflict (“Bloodied corpses, broken bones reveal/ A throng of clashes crushed, our nightmare sealed“), to environmental collapse (“Shining skies will bring on death below“), because we are powerless to stop it (“The harder we fight, the faster we fall“).

“Bleed Into Me” is one of the shorter songs here and fairly straightforward musically, but that takes nothing away from it. Set to a 6/8 groove, it begins sparsely but builds in complexity and layers, and its chorus again is a high point. It’s kind of about opening yourself up to another person in order to fully understand their struggle (“As it bleeds into me/ Let it sink in for you“).

“The Defiant” is hardcore both tempo – and sound-wise in the verses, but the chorus is melodic magic – they are experts at nailing you in the heart with great choruses by prefacing them with equally stellar pre-choruses. A rapid-fire solo section is layered with guitar melody and counter melody and pummeled along by blast beats.

The modulation in the last chorus sends it into the stratosphere – it only lasts a moment, but wow, does it make an impact. The title is pretty self-explanatory, but the play on it in the chorus gives it a thought-provoking twist: “I stand in defiance of your ways” morphs into “The defiant in your way,” which personifies it, turning it from a concept into something more personal.

“Sickness Unto You,” which muses on death and loss and grief and losing yourself, has a loose, experimental, unpredictable structure, perhaps drawing on some of that black metal influence. The switch-ups with both Heafy’s clean and guttural singing and the tempos are a joy, never completely settling into one or another. After a stunning solo, it goes into almost another section with a wholly different mood – it’s almost like the aftermath of what’s happened in the action. Undercut by the truly impressive rhythm section of Gregoletto and Bent, this section is a master class in guitar, pitting Heafy and Beaulieu not competitively but instead in mind-reading, effortless dueling between lead and rhythm.

Beaulieu said in TRIVIUM’s bio that he took a trip with his family to scatter the ashes of his grandparents, and thus arose “Scattering the Ashes.” It’s another shorter track with a chorus to match, one that’s full of meaning and poignancy.

Obviously, there was a lot of regret in the relationship that’s described, of things done that left scars (“Your face betrays your words/ And those words gave way to hurt”), so there’s grief here for sure, but it’s modulated by finality. So “scattering the ashes” is a metaphor for letting it go, putting the past pain and conflicts to rest. It seems to be told from an observational point of view, too, like the person wronged isn’t telling the story – it’s told by an observer watching that other person’s actions.

On the other hand, “Bending The Arc To Fear,” like “Sickness,” is free-form, and that’s another thing TRIVIUM doesn’t fear – they’re fine with being both accessible (as on”Scattering“) and impenetrable, as this one doesn’t readily give up its secrets (that is, becomes listenable immediately, it makes you work to decipher it). They demand that open-mindedness of listeners – while they can write a brilliant sing-along chorus, they’re not afraid to not really give you one either, as here. Thematically, this is likely referring to manipulation, how those in power play off suspicion – the “bending the arc to fear” is changing the trajectory, like the more we “prey upon you,” we’re going to exploit that fear or bend your mind to it.

The wistful “The Ones We Leave Behind” is cinematic and flowing, as structured as “Bending” is not. Musically it’s a dream – the effective tension before the chorus, the delicate bridge powered by Bent‘s superb and imaginative drumming. But it’s that signature guitar melody line, referenced in different ways, that’s even more satisfying – in the bridge, it’s reprised alone, and it’s revisited even more stunningly, with emphasis on the treble end, in the gorgeous fade out – you never want it to stop.

It’s a commentary on poverty and homelessness that poses an interesting existential question – think of “there but for the grace of God go I.” It asks, “If you could breakdown and put yourself together/ Then would all the pieces ever fit the same,” and reminds, “If you could see the ways we’re tied together,” because, of course we are. It says we do so little – “No help, no hope/ Excuses replace guilt/ Patronize/ The ones we leave behind” – but reassures that no matter who you are, you can make a difference (“Gods walk amongst all“).

‘What the Dead Men Say‘ is a completely realized vision, thoughtful, challenging, and yet familiar.

You can order the album through Roadrunner Records [HERE] or various other options [HERE].