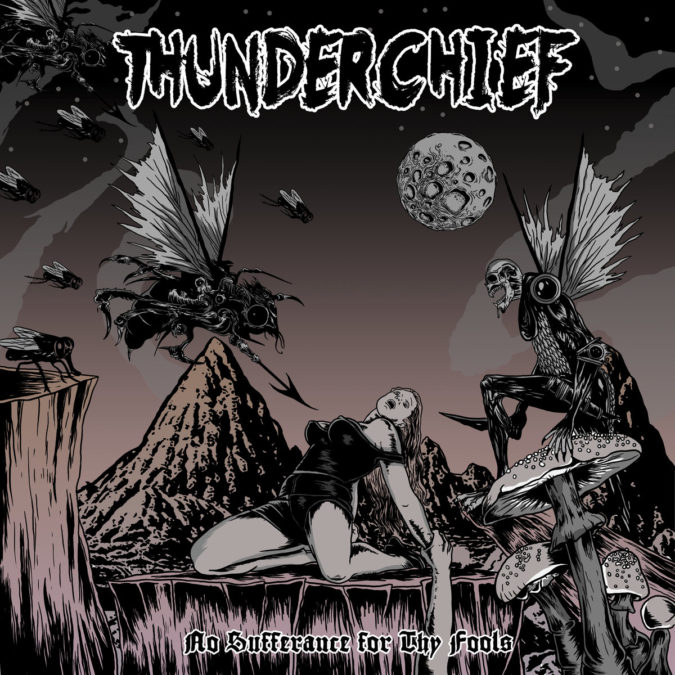 As you may know, the fate of all mankind currently hangs perilously in the balance upon the violently teetering scales of Life and Death.

Uncertainty reigns during the length of each day, no one seems to know any helpful absolutes, and in their stead, supposition. Well, here is something you do not have to guess, hypothesize, or conjecture about… just know that it is so. THUNDERCHIEF, Richmond, Virginia’s misanthropic entity of mangled minimalist musicality, will release a new album on May 15th, entitled ‘No Sufferance For Thy Fools‘.

Be forewarned: If you thought previous output from this monstrosity was volatile, things are about to get more real than ever before. Malevolent mastermind Rik Surly (guitar, vocals, malice) utilized occasional collaborator and periodic drummer Erik Larson (Backwoods Payback, Omen Stones, Alabama Thunderpussy) to his fullest for this recording. Between the two of them, the aggression factor for the six songs found on ‘No Sufferance For Thy Fools‘ is off the charts.

In fact, off the charts is where Rik Surly finds his own reassuring comfort zone, knowing if there is an atypical public embrace of his music, he should buy a lottery ticket on that day. It was my pleasure to have an exchange with Rik in 2019, an interview that you will find [HERE]. THUNDERCHIEF is not music you’re going to hear in some automobile commercial with Matthew McConaughey, nor as some fast food jingle going on as some way-too-smiley people scarf down artery cloggers on a bun.

Instead, these compositions reflect real life; the plight of the every-man to make it through another day in a world seemingly determined to remove him from it. This album serves as a type of soundtrack to such an eviction from two musicians who are themselves enslaved to their own musically derived convictions. You will find no selling out here, my friends… and this reality is driven home within the first few moments of opening assault, “3579“. This concussive, blunt force, sonic strike is a malicious mangling of jarring drum blows riveted into bruising riffs and Rik’s acid-seared vocals.

If you find you have survived that nearly 8-minute opening attack, you will then encounter the lonesome lupine lover of illicit substances, “Lone Wolf McQuaalude“. Appearing as some broken being seeking escape, it is found – yet only temporarily – in a type of dope-induced narcoleptic stupor. It is frenzied, this quickly careening traversing made in hurried haste, perhaps an attempt to beat the drug itself. This hypnotic sedative is intended for inducing sleep, yet for the anti-hero of this track, it is the losing of all tact and gone is all sense of what is appropriate or tasteful. “Lone Wolf McQuaalude” is the aural abrasion of pleasing aesthetics and as it gains momentum, its aggression is more and more ingravescent.

But then, isn’t the severity of life something we all know well, something we can relate to and may even reminisce about? Perhaps our imagined album protagonist equates their life to being a type of “Saipan Death March” (not the song of the same name from The Grim). They feel isolated and alone, like those on the island of Saipan in the Mariana Islands during a week in the middle of June 1944. Embroiled in conflict, death looming and always so close, while defeat lies on the breeze, where any victory in life seems so far beyond reach.

It unfurls here with a feedback drenching at first, quickly giving way to a goose-stepped rhythmic pattern provided by Larson. Surly is soon overlaying rather “bouncy” guitar riffing; it feels almost embedded with levity and is much lighter fare in comparison to other music here. This music is in direct juxtaposition to the thematic lyrical content whose whole gist is: “Now you’re gonna die/ Now get to steppin’/ Go fucking jump!’“. Quaint notions to be found in this multi-textural song; its midway one-eighty into immensely fuzz heavy, groove-infused dooming takes us on quite a ride in this measured tread toward ending life.

Thus, will succumbing to temporal circumstances bring peace? It is time to weigh this rather pressing and ultimately fatalist conundrum with “Oracion de Muerte“. In a world where distress and torment are paramount, their impact is met with apathetic disregard as we just “…watch the children suffer.” Many offer up their prerequisite approach via prayers and inaction; this is the most ultimate of the first in musical form. This “prayer of death” provides a frantic feeling introduction at first, one delivered via a flurry of pounding drums and a subtly placed guitar presence.

Once it does get underway, there is a restraint on aural display; one heard though, as it is not so much a visible thing. Keeping things close to the vest is something Surly is a practitioner of offstage, as is Larson for that matter. I can say this from a firsthand observation after a few years of knowing Rik and some decades of the same with Erik, as both are somewhat reserved individuals. But that characteristic, that behavioral harnessing in a more personal setting, is utterly absent on a stage with an instrument at hand.

The governing of aggression pertaining to song No. 4 will undergo that type of removal when things segue into “Love Roses & A Pyrex Dish“. Don’t blink, though. Truth is, it cannot really be missed, as a few brief seconds of squealing feedback transition right from one into the other. Hope you are strapped in good, too, because the lurch forward is a snap capable of inducing whiplash; one propelled by a rapid-fire assailing of the drums. Like a Tommy Gun spitting forth its ammunition, things go from zero miles per hour to holy-shit-we’ve-hit-warp-speed in no time flat.

This is quite the appropriate rate of timing and tempo speed, too, if the song title and lyrics are an indication. This seeming sonic homage to crack cocaine is a chronic barrage of dizzying kit-work and simplified chord progressions. These are topped off with a volley of intensely vehement vocals from Surly, sounding as if they are in a mode of melting down while spewed.

We reach the final selection of this record, with the superb stand-out “(Dream Of The) Hornworm“, one of my personal favorites since my first listen to this offering. Right on cue, we are soon rolling along with a choppy stagger of euphorically elevating, guitar-generated rhythmic movement reinforced with galloping drums. If there is a “feel good” song to be found on this album, my vote would be cast for this one, despite Surly’s always austere lyrics (for example, this one’s decrying “Your mother’s a whore“).

Real talk… the music of THUNDERCHIEF is not for everyone; it is weighty, catastrophic, and abrasive. Truth is, I’d wager Rik Surly and Erik Larson are well and fine with knowing their heavy-handed metal is not going to be on the Top 40 charts anytime soon. If there is a downside, it may be a lack of vision or overall acknowledgment of some apparently missing the whole point. That point? This music, the ‘No Sufferance For Thy Fools‘ album, is a product of contemporary circumstances, one that can only result from a world in complete fuckery, as ours is at this time.

These are songs inspired by the day-to-day absurdity the world subjects us to, the apparent decreasing intellect of people in general. The fact that Mother Nature herself has seemingly determined to eradicate us from it like so much garbage to be incinerated. This is a recompense I feel is more than justified, too. While it is coming to pass, the entity THUNDERCHIEF has created a cathartic outlet by which to exorcise its players’ personal, innermost turbulence in relation to these aspects. For those enlightened to the factual existence of an individual’s unresolved internal conflicts, our duo of decimating discord here hand us the score for our shared demise.

So be it. Stream this cinderous masterpiece of mass disorder, this provocatively wanton act of malicious willfulness via this review. You can also lead your own charge to the THUNDERCHIEF Bandcamp for further streaming or purchase.