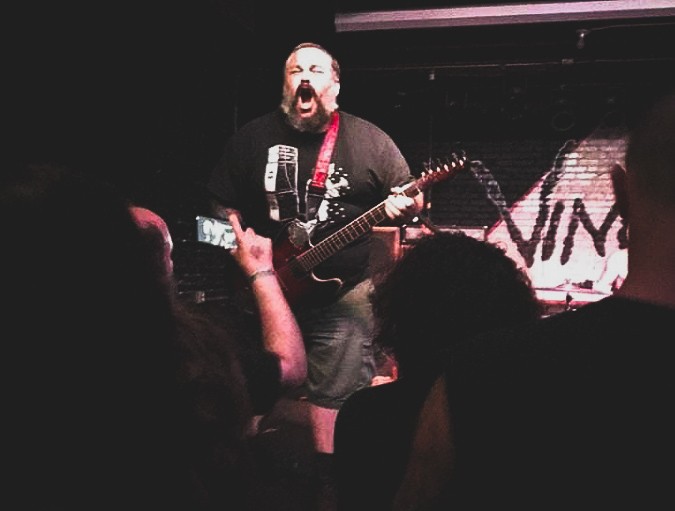 Billy Luttrell, guitarist and vocalist (one of them) for Birmingham, Alabama’s HEXXUS, recently described their music as “Emo played with loose floppy strings.” Now, I wouldn’t necessarily disagree with Mr. Luttrell, but I would suggest tacking on a couple of clarifying words, such as “emo brutally played with howitzers and loose, floppy viscera strings.” Possibly.

HEXXUS is currently working on writing the follow up to their 2017 album ‘Tunguska‘, but we’ll take it straight from the bull’s mouth. Check out what Billy Luttrell is up to these days, as he’s here to be our eighth piece in the Gear Assembly! Rock on…

I got my first guitar, a Harmony electric, when I was 10. My dad bought it for me at a yard sale.

I was hooked. At that moment, I was content just making string noises.

Not really. I like overdubbing lead stuff with Ampeg SS Series amps for the way they cut through, but that’s about the only difference.

Usually, I’ll try to chew some gum or a peppermint while setting up to help prevent dry mouth, so my voice doesn’t crack.

Crowd response is a big one. The transfer of energy pushes you. Call and response.

We try to give the same show to the small crowds as the big crowds, but it’s definitely easier when the crowd – no matter the size – is energetic and responsive.

Mostly though, it’s the total belief in your songs and their meaning.

An odd tuning that I invented. Finger dexterity, neck bending, and the occasional pinch harmonic.

All three of the string players in HEXXUS use Hilbish Beta / PB10 preamps.

I really only like Telecaster and Gibson SG guitars. Although, one day I hope to have a Dunable.

We’ve always been loyal to the Sunn Betas, but also have had too many tours and shows with 40 year old amps that are difficult to find someone who can do maintenance and repairs on.

The Hilbish ones actually sound a little bit darker which is even better… they’re made with modern components and assembled in Virginia. Any issues, we can ship them back to Nate Hilbish and he’ll repair them. Just overall better and more reliable for an active band setting.

The majority of our song content is based on tragedy. Friends and loved ones passing, dealing with depression, or self destructive habits as a way to cope. We need this band to help with our personal sanity more than anything.

It seems we have no shortage of horrible things happening, so the creativity is staying stimulated without hobbies.

Influencing? No.
That we admire and adore? Definitely.

Ether Coven, who we got to tour for a week of shows with last year just dropped a new album on Century Media. Wvrm is about to drop a new one. Hepatagua recently released a song and digital ordering for a new EP.

Don’t talk about, do it. Get in the van and go.

Well, maybe not right now. After all this is settled, then go.

It really hasn’t yet, since we weren’t touring – but I’m sure it’s going to.

We’ve been focused on writing and getting prepared to record a new demo for label shopping.

A second Hilbish for a back up would be cool. I’m pretty happy with what I have and what I’m able to do with it.