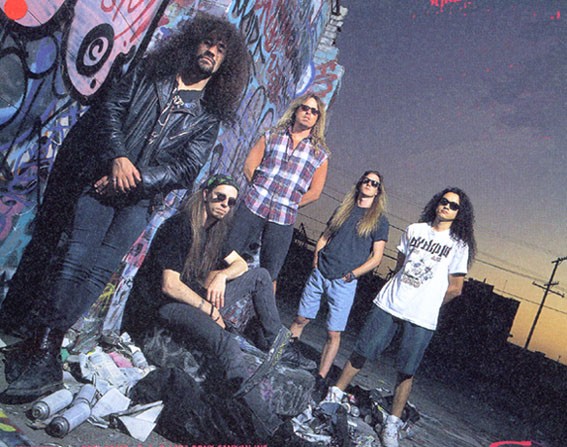 The grunge and alternative rock scene establishing itself in the Pacific Northwest during the early Nineties would seemingly affect everyone and everything in time.

One of the supposed casualties was the thrash metal community, a scene that soon found its pioneers put out to pasture. 1992 saw two instances of this in particular, pertaining to a pair of West Coast thrash metal acts. The first of them, Death Angel, had seen singer Mark Osegueda exit after three studio albums. The remaining members of the band did not seem to misstep, as they adopted the name The Organization and went on to release two incredibly good albums for Metal Blade Records.

That same year, 1992, Lȧȧz Rockit called it a day after the release of a live album, but several of the members were second-guessing the move. By the following year, four of the Lȧȧz Rockit lads – singer Michael Coons, bassist Scott Dominguez, and guitarists Aaron Jellum & Scott Lee Sargeant – had launched an all-new metal band, GACK, with the help of Defiance drummer Matt Vander Ende.

Things moved quickly for GACK, as they recorded their debut album in 1993, a Japan-only release for Pony Canyon, ‘Fix‘. Sound and style-wise, the material was quite similar to Lȧȧz Rockit, but did possess more groove metal elements and an experimental edginess. Being released only in Japan fueled demand for the record, which has become a cult classic over the years since. Ultimately, it would also be the one and only release from the short-lived GACK, who never officially broke up, yet also never did anything else.

At least not as GACK, for Lȧȧz Rockit reformed in 2005. Admittedly, a rather brief #OS today but one that some may find informative, perhaps enlightening someone to a band they weren’t aware of. I own the GACK ‘Fix‘ release on CD myself but had not thought about the band or listened to the album in quite a while. Recently, fellow Riff Relevant writer David Lamay had shared something online pertaining to GACK, and seeing how many people were not aware of the band / album, I thought I’d do something to help get ya hip. Now, I have… and (perhaps) you are. Enjoy!