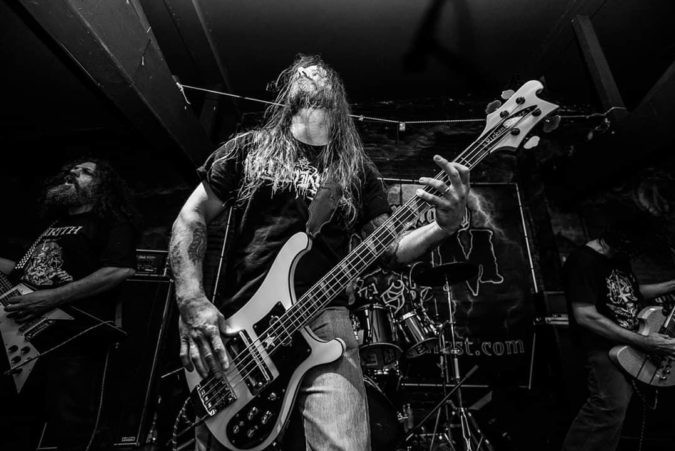 A single bassist solidifies the low end of the trifecta of Massachusetts heavy – WARHORSE, CONCLAVE, and DESOLATE. That lone bassist is named Jerry Orne, and he’s here as today’s featured Gear Assembly artist. While all three of these bands are almost shockingly heavy, they are distinctly different in weight and texture. WarHorse classifies itself as “apocalyptic doom” metal; Conclave leads down the sludge doom path; and Desolate is purely pummeling black/death metal.

For all the intimidation his three bands throw at your skull, Jerry Orne is one of the most pleasant and kind gents I’ve had the honor to be acquainted with. I suppose unleashing all possible angst through his bass helps. The bands have been keeping their acrimonious whiplash at bay the past few months due to the current malaise of essential distancing, but we’ll find out what Jerry is up to these days, as he’s here to be our tenth piece in the Gear Assembly! Rock on…

For WarHorse:   A Rickenbacker 4001 (black, 1974) with handmade LanePoor pickups or my Gibson RD Artist (I bought it stripped and beat. Rio Grande pickups now.)

For Desolate:   Mainly a BC Rich Mockingbird with EMG X active pickups.

Exact moment is tough to nail down… but as a young kid, I loved the massive sound of Roger Glover, the lines of Dennis Dunaway, everything about Geezer Butler, and where to begin with John Entwistle…

Conclave, probably “Cut It Off“. It’s not as heavy as our other songs, but it’s how I tend to write things.

For Desolate, I really don’t write too much, honestly. But I’d say “Blessings End” is right up my alley style-wise.

Not really. We have a few acoustic things we don’t do live, but otherwise it’s the same.

Just warming up my hands. Especially with Desolate. Getting up to speed.

Maybe a nod to the guys. Various insults, that kind of thing.

We change set lists all the time. I love to play, so it’s always interesting.

Attack and dynamics. Plus my crap attitude.

No sponsors. I love all my gear listed above and more. I’m partial to D’Addario strings.

The Black Lodge Audio fuzz is a custom that Chris Giguere made for me, and he also repaired a couple of my old pedals. He’s a setup wizard and is helping big time with the latest project, a Punisher bass.

I love gear. If I’m not playing, I’m usually messing with something or reading about it.

Creativity can be elusive. I try to stay honest and mentally boil things down to find what they really mean.

New England has such a bad ass music scene. We really are fortunate.

Young bands like Garroted and Graviton are headed for great things. Black Mass is kicking ass all over the place.

Then a few favorites are Angel Morgue, Witchking, Boghaunter, Benthic Realm… way too many to mention. I’d seriously be here all day.

Find what you are, and do more of that. Do not stop.

It has crushed 2020. I cant tell you how much I was looking forward to all the shows this year. Just awful. I’m afraid it’ll get worse before it gets better.

I’m pretty fortunate to have the setup I do. If anything, I’d just have more of the same. Stack em up.