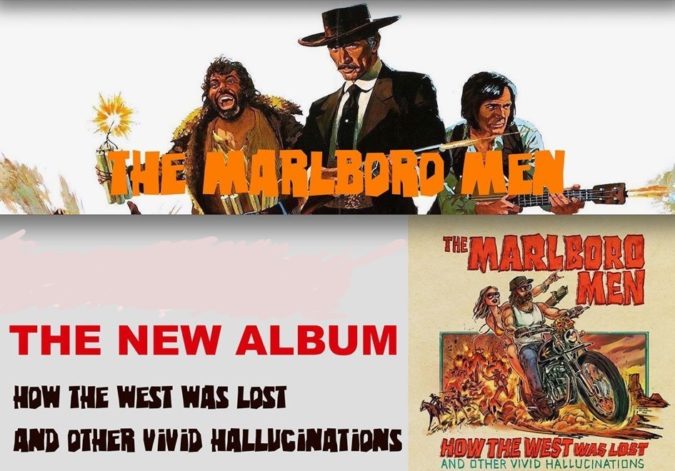 Guitarist and multi-instrumentalist Dave Talon is a proverbial Jack-of-all-trades when it comes to exploring and participating in the creation of music.

With a headlong immersion into the ethereal regions of heavy rock via Australian stoner rock legends Rollerball, to more recent forays into goth-punk metal via Captain Control, or the feel-good climes of disco pop with Poor Little Things, Dave Talon is a talent unleashed to be certain. Never one to rest on his laurels, for there is always music to be made, Dave yet again recently got busy in THE MARLBORO MEN, his combo with Poor Little Things percussionist, Fernando Marlboro.

In March, the duo released their latest studio-derived full-length, ‘How The West Was Lost And Other Vivid Hallucinations‘. In case you don’t know, the follow-up to previous efforts, ‘Who Says You Can’t Get High At 95 MPH‘ (2012) and the self-titled ‘The Marlboro Men‘ (2011), is an instrumental affair. It features Dave Talon on guitar, bass, synthesizer, guitar synthesizer, and cowbell and Fernando Marlboro on all drums and percussion.

Within the span of its ten tracks, the pair guiding this ride seem determined to take the listener on a journey. There is an abundance of lively jamming, the sort driven by energies translated into a type of sonic propellant. This is immediately recognized during the roll-out of the title track, “How The West Was Lost,” that takes us into this thing. After a very spaghetti western-like intro moseys along into a brief audio sample, the mark of disembarkation is reached and off we go… for almost the next two minutes.

That’s right, it’s an intro within an intro and now we get the more unleashed, pedal down, and gear jammin’ duo with “Grogan’s Run“. Latched back at times with a whiplash-inducing jolt, a stoner rock-in-the-24th-century tone, sound, and vibe takes over for a bit. This soundtrack quality composition easily evokes cinematic-worthy images; a craft rocketing across the cosmos, destination unknown. We frequently throttle down, thrusters reduced and this is reflected in the music taking on a carefree glide quality, albeit momentary.

The next track to really grab me is the blues-hewn, “Under The Eiger.” If we escaped this prison planet previously, we’re back on Earth now. Things feel a bit more Kyuss-meets-The Ultra Electric Mega Galactic in this harder-edged riff ‘n groove deluge. Things are happening here, in the shadow of this mountain in central Switzerland (oh, did I mention T.M.M. are bi-national — at home between either Australia or Switzerland?)

At times along this album, we get the sensation of station changing on the FM radio. This is created by the reluctance to stay in a pigeonholing position, genre, or any stylistic typecasting. We get an organ-flavored jazz improv via “Neuman’s Descent,” the kind I’d imagine The Doors might play today, or the thick simian riffs of “Ape Has Killed Ape“. We will find other flavors in this particular song, ones like Middle Eastern and spoken word/ sample.

With the darker, occult rock emanations of “Festa dei Separi” providing one of the truly heavier tracks, we will also visit one of my favorites. “Antarctica And Beyond” is where Dave and Fernando conjure forth a multi-textural monstrosity whose title is most appropriate. This vast traversing where beats, programming, synths, and the use of contemporary elements are used to augment what is what. The outcome is a hypnotic dirge of solemn, audible modernism… better living through electronica.

Those psychedelic nuances will not vanish yet, for if anything they are more prevalent in “Slow Train To Domodossola“. With abundant inner headfuckery found to be deeply permeating these passages’ restrained delivery, this bog in is quite the hearty one. With the return journey of “How The West Was Lost (The Big Reprise)“, things end on a familiar footing and we are that much better for having heard it.

Having heard the very latest from THE MARLBORO MEN myself, the repeat listenings of ‘How The West Was Lost And Other Vivid Hallucinations‘, is a sight to behold. Simultaneously, it is a most pleasurable experience in hearing, while at the same time… it’s a release well worth playing and owning.

You can do the first of those in this review and also do both at the following destination, the T.M.M. Bandcamp.