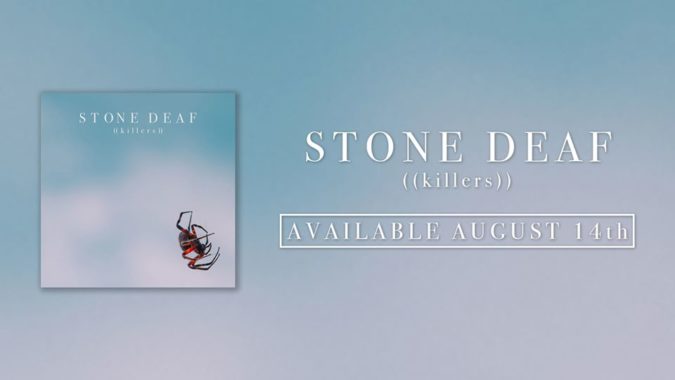 New Castle, Colorado’s STONE DEAF has steadily produced a fusion of melodic sounds that pound your brain into an atmosphere hovering between the airy cool of desert rock and smoky stoner thickness, with a surprising sucker punch of beatnik punk rock.

Their fourth record and third full-length, ‘((Killers))’,  is slated for a late summer 2020 release – more specifically on Friday, August 14th – via Coffin & Bolt Records. Today we’re honored to present a premiere of the band’s new single “Polaroid” from that upcoming ‘((Killers))’ album, with its video presentation below. Some hype from guitarist and vocalist Dust Chapin about the new “Polaroid” single:

“Put that shoe horn down cause those boots are stayin’ on and scootin’ over to the dance floor for Stone Deaf’s latest toe-tapper. With more hooks than Tyson, ‘Polaroid’ is an auditory strip tease you can’t turn away from.”

With slightly unnerving, yet beautiful album cover photography by Matt Hall, the band invites you to take a ride with them in their third full-length album ‘((Killers))‘.

Travel down a long, dark stretch of never-ending highway, picking up frenzied hitchhikers along the way. Telling tales of an oasis covered with velvet, giant centipedes, and a dark carnival with a fiery past. Inspired by a backdrop of writers such as David Lynch, William S. Burroughs, and Hunter Thompson, ‘((Killers))‘ is a dark, toe-tapping soundtrack to life in the Interzone.

Releasing in full on August 14th, 2020, the album will be available as a digital download or stream via Bandcamp, as well as in physical format via Digipak CD. Order HERE.

There is currently an exclusive ‘((Killers))‘ Pre-order Bundle package available that includes the digital download and CD, along with a special T-shirt. Click the image below to order the Pre-order Bundle or HERE.