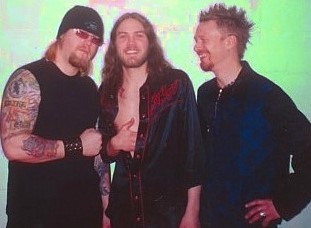 Kuthe was freshly out of the band that bore his last name, Kuthe, and their sole album release of that year, ‘From Out Of Thin Air‘. Kuthe basically had music in his blood, having been around bands and musicians since his youth, as his parents ran a Toronto venue that hosted hard rock acts. Now, Kuthe undertook the creation of his own hard and heavy rock with Kuthe drummer Chris Bender and guitarist/ vocalist Travis Cardinal, as SEA OF GREEN.

There was no possible way to avoid the go-to standard of tagging when it came to this effort, as “stoner rock” assuredly applied. It went so much further though, as SEA OF GREEN possessed a harder-edged take in their music, tempered with melodic tints. The EP quickly found favor with fans of underground music, as well as the critic-oriented community, and the band soon invaded America. They embarked upon a U.S. tour in the fall of 2000, one that saw them share stages with YOB, Witch Mountain, Jucifer, and Dixie Witch, among others.