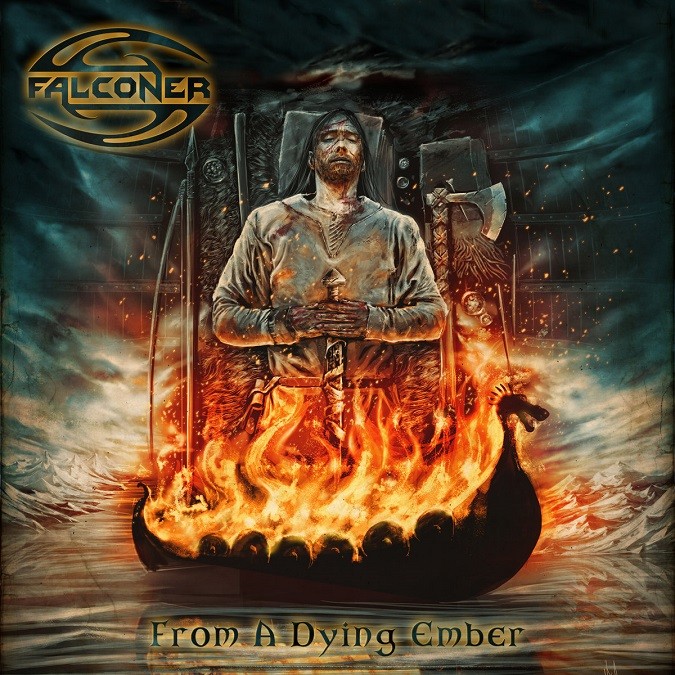 Power metal gets a bad rap for what’s seen as its excesses, but the best power metal often hides sharp observation and sensitivity amid all the grandeur, and FALCONER’s latest, ‘From a Dying Ember,’ does just that.

And sadly, it’s also their last – the band announced its dissolution in June. It’s just like me to happily discover a band only to have it taken away…

This last effort is the Swedish band’s ninth album since their formation in 2001; they are singer Mathias Blad, guitarists Stefan Weinerhall and Jimmy Hedlund, bassist Magnus Linhart, and drummer Karsten Larsson.

A majestic waltz tempo and a wonderful lilting guitar melody start off “Kings and Queens” before Larsson’s signature double-kick drumming kicks in. It’s stately and sweeping, all that power metal should be. A FALCONER technique is a legato verse undercut by all sorts of jaggedly crazy rhythmic stuff going on beneath, and it happens throughout the album. A touch of organ sweetens the beefy solo before we return to the main melody.

Call this a self-help song – the “kings and queens” reference is saying we alone are in charge of our destiny and not some higher force (“Take command and rise from slumber/ Our time must not waste away”), and that even the mundane can be valuable (“Even the simplest of goals/ And the simplest of days/ Can be reached in a manner/ That enlightens the way”).

Power metal usually places a lot of emphasis on a big singer with massive pipes, but Blad isn’t like that. His voice is pristine, pure, and resonant, not necessarily what you would call a metal voice, per se. He does struggle just a little to reach lower notes in that he loses a little volume on them. He holds his own in the complexity of the music, but he’s definitely a part of it, not the leader of it. There’s also very little backing vocals or vocal layering; those touches are used judiciously as emphasis.

“Desert Dreams” showcases the band’s formidable guitar melody chops and their knack for switching tempos on a dime – the intro here is a perfect example. The lead-in melody to the chorus is bassy and groovy and builds suspense, and there’s a folky little guitar interlude before the chorus. The last chorus has a tiny bit of pipes wafting through – as with the organ in the previous track, it’s a little treat for the careful listener. The phrase “desert dreams” is a metaphor for all those things we dwell on in our heads, the self-doubt, the negative thoughts (the “vultures to be found”), being lost in a desert of the mind but knowing you have to get out of it (“face the fear, grow stronger by the scars”).

“Redeem and Repent” has heft and balance courtesy of the initial riff before it picks up the pace. The pre-chorus is practically baroque, all the music fading away as Blad bouncingly relates the forbidding scenario. The chorus is interesting in that it’s really short and kind of leaves you hanging, which is an interesting idea, and it’s very nearly happy and optimistic.

But it doesn’t take much reading between the lines to see this is likely referring to certain world leaders and it’s done with a ridiculous amount of subtlety and grace. “Trapped in a travesty of jokers at the lead,” it begins, decrying the time when “Honour flanked intellect and fell into the well” (SUCH a turn of phrase). The pre-chorus remembers, “The sceptre is stolen by a jester in the king’s court/ Beware of his temper, beware of his pride,” and that “Clowns have the word/ Fools have the day/ Meanings are blurred/ As sense flies away.” My favorite couplet, though, is “Heedful enlightened rule slips into the void/ Out from the shadows steps a cranky boy.” In case you had any doubt, yes, the world is watching us and we are found lacking.

Later, “In Regal Attire” makes a similar reference – “Proudly he stands/ To fatherly posture they yield,” and “Eat from his hand/ Beware of the claws concealed.” The chorus is most especially pointed, as they sing, “Hoist the flag/ Higher and higher/ You boast and you brag/ In regal attire.” Heavily folk-influenced in feel, the chorus lengthens into a straight 4/4, and the solo changes keys very slightly. The final choruses modulate and add vocal harmony, creating even more interest.

Two songs switch things up a little. Blad sings lovingly in his native tongue on “Bland Sump och Dy;” there’s a point too where he nearly yodels. It’s heavily folk and heavy at the same time, nicely dark and sinister despite the lightness of the vocal. And the instrumental, “Garnets and a Gilded Rose,” is equally folky, starting with what sounds like a harpsichord and an acoustic guitar before waking into an electric beast that drives home their customary 6/8, a rhythm custom-made for headbanging.

“Fool’s Crusade” soars on Blad’s gorgeous high register – his vibrato is never overdone and his diction is brilliant – but again in the chorus, his lower end gets a little lost. Larsson’s persistent double-kick drumming is never obvious or overwhelming (it’s like a heartbeat beneath the layers of guitar), and there’s plenty of rhythmic texture, including a sprightly swing that’s irresistible. Here, too, is where I realized I enjoyed their long pre-choruses that lead into comparatively short actual choruses – it’s an interesting technique.

The bridge makes reference to environmental disasters (“Swim in toxic rivers” and “Feel the wind in your hair/ Feel the stench in your nostrils”). Perhaps the whole song is such a commentary (“Lost is the reverence, lost is the awe/ For the land, for the sea, for the sky”), but it’s couched in metaphor so it’s not precisely clear. That’s perfectly fine, though.

“Rejoice the Adorned,” a piano ballad mourning the loss of a loved one, is anchored in Blad’s beautifully echoing voice, mixed so intimately that it’s right in your ears. It’s sparse and underdone, showing the most admirable restraint. The chorus is sad, but not maudlin (“See the loss of as a token of value and grace/ Though my heart’s in a shroud,” is a lovely way of saying “they’re in a better place now” minus the cliche), it sweeps a little but never gets out of hand.

“Testify” too, avoids a cliche, the one of “to thine own self be true,” by adapting it to the digital age (“Don’t speak your mind/ But pick your words with caution” and “Who could be hurt?/ Who could be judging what you say?/ Where can it lead?/ Think twice before you proceed,” it warns). “Justify my dos/ And justify my don’ts” reminds us that you always have to be responsible for what you say and how you act, and it questions too whether that constant evaluation is good or bad.

“Thrust the Dagger Deep” is thudding and slower, the chorus spartan and powerful. There’s the aural treat of a droning bagpipe way behind in the second verse and an organ line in the solo section, adding to the hopeless, resigned feel of the lyrics. This is one track that doesn’t rely on double kick and it’s a nice change-up. The whole solo section goes through several clearly defined moods, and the last chorus adds vocal harmony for the final denouement. It’s all kind of a metaphor for knowing when to cut your losses – the actual title has a suicide, fall-on-your-sword kind of idea, but it’s more metaphorical than literal.

“Rapture,” the longest track, ends, and it’s a very folky, majestic ode to nature, with touches of fiddle and accordion. Each of their many rhythm changes is executed effortlessly, even into an extremely fast section in the bridge (I mean extremely, like borderline speed metal) that’s yanked to a halt in the bridge section for the 6/8 swing to begin anew. It’s not jarring, it all works. It’s a splendid final track that shows off all their facets to the best advantage. The last stanza is the perfect farewell, holding no regret but instead content in the knowledge that they are doing the right thing:

“I sail on raging waves
Onto a distant shore
Cross the vast seven seas
I feel peace in the storms
Fear the darkness of the deep
Ever present the void
As alone as one can be
I feel nothing but joy.”

‘From a Dying Ember‘ is somewhat mistitled – it’s indeed a requiem, but FALCONER‘s flame is definitely not out. Let’s hope it’s merely banked because this album still holds plenty of possibilities.

You can order the new FALCONER album ‘From a Dying Ember‘ through Metal Blade Records store via Indie Merch or digitally on Bandcamp.