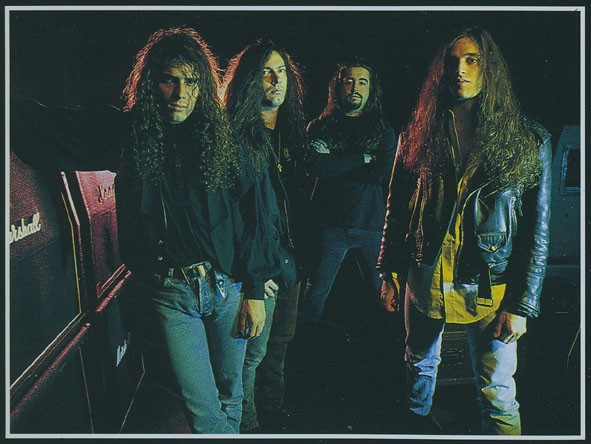 To properly relate the story of the Nineties’ New Jersey-based alternative metal band NON-FICTION, we must first begin things in 1978, with the now-legendary band Hades.

That was the year Hades formed under its founder, guitarist, and songwriter Dan Lorenzo. In time, alongside him came to be vocalist Alan Tecchio. Depending upon your accumulated experience as a metalhead, more than likely you had heard of Hades at one time or another. That band began as a cover-playing act and by the mid-Eighties had evolved into one writing its own original music. Hades would continue on for years and although their last studio outing arrived in 2001, several compilations and a pair of home videos had followed since.

In 1988, Dan Lorenzo seemed to get the itch to explore other styles of music and before that year ended, he was working on a new project, using #9 as their name. The quartet saw Lorenzo joined by future All Time Low drummer Mike Cristi, Syianic bassist Damon Trotta, and Mucky Pup’s Dan Nastasi on guitar and vocals. The band recorded a 5-song Demo on cassette, but it did not see circulation for a few years. The band soon took another name for themselves and on the very first day of 1990, NON-FICTION released their debut; a 7-song, self-titled EP issued through Arena Records.

This turned out to be the only NON-FICTION release with this particular line-up of players. When the band returned in 1991, there was new blood in bassist Kevin Bolembach and vocalist Alan Tecchio. The reunion of Lorenzo and Tecchio, backed by the rhythm section of Cristi and Bolembach, made for incredibly potent band chemistry. This was immediately understood when music fans, critics, and fellow musicians (and I am just as sure, the band’s family members) heard what resulted from this particular foursome’s work together. I am also sure that anyone reading this is familiar with the terminology of the “one-two punch,” but if not: in the boxing world, it is a combination of two blows delivered in rapid succession.

The first of those actions landed in 1991, with the Grand Slamm Records release, ‘Preface‘, and its ten songs of darkly-hued, metallic grunge. With riff master Dan delivering, there was an evident presence of traditional doom beneath the surface of the contents. As always and anytime on the mic, Alan’s dynamic vocals were impossible not to react to and their scope was beyond impressive. Cristi’s drum work was exceptional, neither lacking nor overpowering, and when bolstered by Kevin’s own impressive low-end, it was the very formula needed to create emotion-inducing songs that stuck with you long after they stopped playing.

With the first studio blow thrown, NON-FICTION followed it up with the beyond exceptional ‘In The Know‘ in 1992, once again via Grand Slamm Records. This was undoubtedly the creative high point for the band, a magnificent opus where anything hinted at on its predecessor was fully fleshed out and utterly phenomenal. This album marked a clearly defined turn toward heavier songs and made no bones about its tracks taking on a striking heavy metal styling. It also yielded an official video for the song, “Reason To Live“, which got NON-FICTION regular play on MTV’s “Headbanger’s Ball” at that time.

A few years passed before fans heard from NON-FICTION again, but our faithful foursome returned with ‘It’s A Wonderful Lie…‘ in 1996. Released through Germany’s Steamhammer label, the album was the continuation of the genre-melding musicality established on the earlier outings. For me, I found this album to be more akin to the music of Soundgarden audio-wise, but it ended there, as this one’s music was much more metal in nature. Unfortunately, it would be the last such from NON-FICTION, who had disbanded by 1998, the same year Tecchio and Lorenzo reformed Hades.

The two of them involved themselves in some of the music’s more outstanding projects over the years. Nearly simultaneous to his time in the original Hades run, Alan Tecchio also fronted progressive metal act Watchtower. He was quite well respected for his contributions to such notable bands as Power, Seven Witches, Heathen’s Rage, Autumn Hour, Level Fields, and most recently, Mike LePond’s Silent Assassins.

Dan Lorenzo has also stayed busy; with an on-and-off Hades, a one-off “supergroup” The Cursed (with Bobby “Blitz” Ellsworth of Overkill), Cassius King, and – in recent years – Vessel Of Light. You can see more on Dan’s history, and learn some insightful revelations, by means of this Riff Relevant interview and conversation with him in 2017.