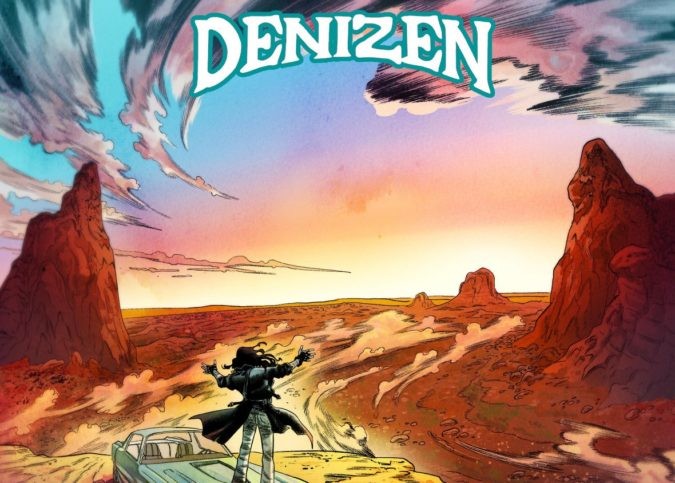 It is a widely shared belief that some things do actually get better with age, though I myself am not absolutely sure as to what all this would entail.

There are two things that I and the general public have commonly embraced as items getting better with age: Wine and antiques. Both are absolutes, in that we know they increase in their overall value, but I am here to suggest that music too can increase in its overall worth with the passage of time. The reason I bring this up is because several of my current album reviews are not precisely “current” releases.

The subjects of today’s audio dissection are the French denizens known as… well, DENIZEN. Back at the end of November 2019 came their latest album, ‘High Winds Preacher‘. Released through the Italian label Argonauta Records, the album was a sleeper hit with many fans and critics alike. For some, like myself, it was our introduction to the band, despite its being preceded by three prior releases – 2017’s ‘Songs From The Kraken: The Georges Sessions‘ EP, 2015’s ‘Troubled Waters‘ full-length, and another from 2011, ‘Whispering Wild Stories’.

As for the sonic substance of ‘High Winds Preacher‘, imagine a cross-pollinated chimera of equal parts Wolfmother, Shadow Witch, and Lo-Pan. If you can stretch your imagination in such a way to make a malleable representation of such a creation, then damn you’re good! Truth is, you won’t need to, for those bands are intentional generalizations of the wide swath and scope of the DENIZEN sound. It is heavily enriched with fuzzy tones, bluesy undercurrents, and myriad other exceptionally enticing elements from the hands and heads of vocalist Fabien Aletto, guitarist Yann Chinette, drummer Andréas Goumy, and bassist Colin Trognéet.

Truth is, a veritable plethora of music styles, genres, delivery intensities, and more are explored within these ten tracks. Don’t just take my words here at face value, that is never a suitable game plan. Though it might take a moment to compose yourself once the first of them, “Shadow Dancer“, steps forth and gets down. Reminiscent of sHEAVY briefly here and there, this number is a hard-hitting “howdy” you won’t soon forget. Some excellent guitar riffs and leads are presented throughout and are certainly worth mentioning.

Catch your breath now, friends, as you definitely will have the opportunity to do so. “Among The Trees” is a slower-paced pummeling of full-on, fuzz-fattened riffs while a much airier vocal provides the narrative. There is also an almost Middle Eastern or Egyptian vibe during the guitar soloing. Gradually, more and more hypnotic qualities will increase in the music, but ones offset with mounting blues inducements. “Ears Wide Opened” is more than an ideal example for discovering what I mean.

There are numerous stylistic displays present throughout this record, ones representing an overall diversity that DENIZEN possesses. At the same time, they cast connective tissue reminiscent of others… like how “Chasing The Guru” easily brings to mind Orange Goblin at times. Mind you, this is not a negative in any way, for it does establish relevant connectivity between certain bands, their music, and genre classifications. There is still plenty of the latter two things to explore here, like the hazy psych-inflected desert rock of “The Beast“, or one of my favorites, “Mandrake Is Everywhere“.

Uptempo out of the gate, this nearly metallic track is a scorcher, constantly in motion, and hitting all the marks while moving through. However, it does seem a little slow in comparison to what follows it. The eventual punk rock feel of “White Flamingo” begins on a much different foot, bringing to mind Helmet or Rollins Band, before the frenzy begins. A mid-song turn toward more laid back, jazzier slow jamming is a nice offset to those more angsty aspects, or how about a bit of grit-tinged prog-metal via “Deaf Taint“.

In all seriousness, there has been a more and more noticeably prevalent building up of musically menacing numbers in the latter portion of this record. The last two songs, “Punch Out” and “Tomahawk“, pull out any remaining stops as they go for your throat. “Punch Out” really pulls none, as it winds out with high octane acceleration, showing itself to be raw and uncompromising. “Tomahawk” seems borne of the same playbook, a high stakes gear jammer that does intermittently indulge some rather doomy passages.

As DENIZEN close in on their tenth anniversary in 2021, they will eventually exit this decade on the high that is the ‘High Winds Preacher‘ album. Recorded and mixed by the band’s own Colin Trognée at Studio Mordor – except drums, those were recorded at Buèges Valley Recording Service by Simon Pillard and Colin Trognée – and mastered by Kent Stump (Wo Fat) at Crystal Clear Sound. The album features artwork created by Brice Cossu and it is available to stream in this review. Further streaming and purchase options can be found at Bandcamp [HERE].