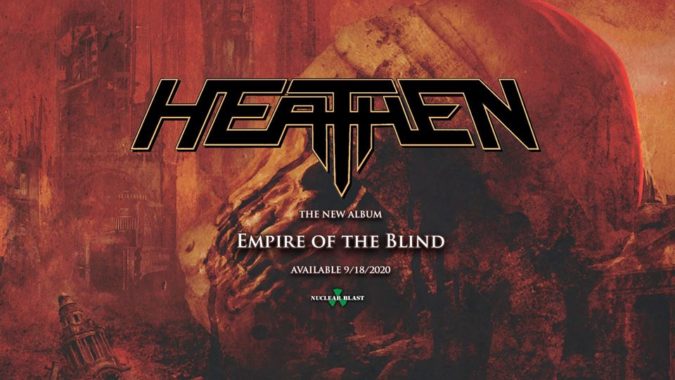 Iconic Bay Area thrash metal legends HEATHEN announce the nearing arrival of their fourth studio album, their first of all-new music in over a decade.

The 12-song ‘Empire Of The Blind‘ is set to be released September 18th via Nuclear Blast Records and premiering today, the title track second single. “Empire Of The Blind” is vintage HEATHEN in every sense, from its non-stop, razor-sharp guitars, to its piston-like drums and searing vocals. The song is presented by means of a new lyric video containing imagery from the album’s cover artwork created by renowned artist Travis Smith (Seempieces).

The band shared the following about today’s song saying:

“We are very proud to announce the second single, title track from our new album, “Empire Of The Blind”! This song refers to the ongoing manipulation of people through political and social propaganda in the mass media. Behold the rising empire!“

Most of the ‘Empire Of The Blind‘ contents were engineered, produced, mixed, and mastered by Christopher “Zeuss” Harris at Planet Z Studios. All rhythm guitars were put to digital “tape” by Kragen Lum at SubLevel Studio in Little Rock, Arkansas. The album features guest appearances by three of metal’s most capable guitarists, Gary Holt (Exodus, Slayer), Rick Hunolt (ex-Exodus), and Doug Piercy (ex-Heathen).

Ten years have passed since HEATHEN graced the planet with an album of all-new music and excitement is growing. Check out the “Empire Of The Blind” single below, along with the previously premiered song, “The Blight“.

The history of HEATHEN is one integrally linked to the birth and subsequent rise of the Bay Area thrash metal movement. Formed in 1984 by guitarist Lee Altus, the band would spend its earliest years seeking the ideal combination of the right players to move HEATHEN forward. Early line ups would see guitarist Jim Sanguinetti exit to form Mordred, and Blind Illusion vocalist David R. White (also known as David Godfrey) join to replace an earlier singer in 1985. He was later temporarily replaced by Paul Baloff (R.I.P. -Exodus, ex-Piranha, ex-Hirax) and, for a handful of days, Metal Church / Reverend’s David Wayne (R.I.P.) before eventually returning.

Between 1987 and 2010, HEATHEN released three critically acclaimed studio albums – ‘Breaking The Silence‘, ‘Victims Of Deception‘, and ‘The Evolution Of Chaos” – along with a collection of cover songs in 2004, ‘Recovered‘. The band became well appreciated for their technical precision, ambitious songwriting, and timely, relative lyrical themes centering on religion, politics, and society in general.

‘Empire Of The Blind‘ will be available in the following formats:

The new studio album from HEATHEN, ‘Empire Of The Blind‘, will be released on September 18th from Nuclear Blast Records. Pre-order a copy in the format of your choice [HERE].