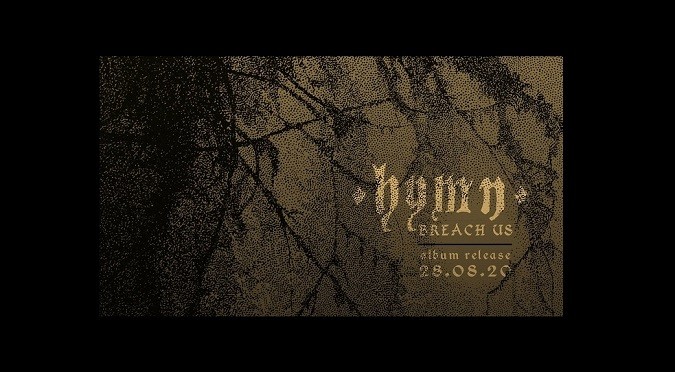 HYMN is a Norwegian heavyweight metal duo consisting of singer and guitarist Ole Ulvik Rokseth and drummer Markus Støle. The pair have been working together for thirteen years, with projects like Buckaduzz, Tombstones, and more recently Sâver. They have also served as session musicians for a diverse range of Norwegian artists, like Okay Kaya (Jagjaguwar) and Gundelach (UOK?).

The two-headed, four-handed blackened and sludgeoned post-metal beast that is HYMN has been pounding skin and pulling the strings of serial-amplified guitars since 2013, having toured small clubs and festivals in Europe (including the Øya festival, Stick & Stone fest, and Freak Valley Festival) at length following the release of their debut ‘Perish‘ on SVART Records in 2017.

Their second offering is entitled ‘Breach Us‘ and is due for release in late August on Norwegian underground stalwart Fysisk Format. Recorded and mixed by Kim Lillestøl at Amper Tone Studios in Oslo, Norway, ‘Breach Us‘ is a gargantuan tour de force and a testament to man’s will to exert discipline and human direction to the universal powers of chaos.

“Our goal at Amper Tone Studio was to set things up basically as we do on live shows,” says the band. “Facing each other, Marshall JCM 800 and Simms Watts 120 in stereo and a Ampeg 810 stack on full blast. Gibson Les Paul with 74 gauge strings and a couple of fun effect pedals and we are ready to go. We don’t want to record anything that we can’t perform live, but of course, we always get inspired during the recording process and ‘shit happens’. That is what makes this band special to us; with only two people there is always room for quick turn-arounds and improvisation. We ended up recording the whole thing in about 48 hours.“

The duo’s trademark unpredictable riffing, otherworldly power, and precision will exalt the daring listener through focus and confusion, craftsmanship, and chaos; sucking up the sludgy tradition through their roots and branching up into metal’s unknowable future. ‘Breach Us‘ is metal coming to life in 2020. Pre-Order the new HYMN release ‘Breach Us‘ at Fysisk Format or via Bandcamp.