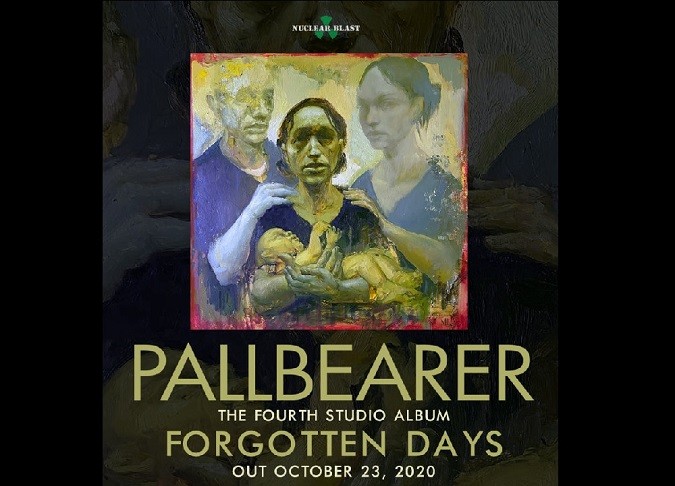 Epic doom metal act PALLBEARER is set to release their fourth album, ‘Forgotten Days‘ on Oct. 23rd, via Nuclear Blast Records. The band has released a second track “Rite of Passage” from the upcoming nine-song album.

“‘Rite of Passage’ is both a reflection and a confessional,” explains bass player / songwriter Joseph Rowland. “The toll that loss has taken on my life often finds ways to remind me that I may never feel whole, and the song’s purpose is to express and embody that emptiness. It felt totally appropriate to wrap it in reimagined trappings of our earliest doom-leaning material.“

The band previously released a song and accompanying video for the album’s title track [link] as well as a black and white “Cinema Edition” [link]. The song was met with widespread praise from both fans and the media alike. Discussing the themes behind the album, singer / guitar player Brett Campbell, said:

Randall Dunn (Sunn O))), Earth, Johan Johannson) produced the album, and it was recorded at Sonic Ranch Studios in West Texas. Michael Lierly, drummer Mark Lierly’s brother, once again created the album’s artwork, crafting images that were roughly hewn, yet heartbreaking in their expressive heft. The striking cover is the ideal foil to PALLBEARER’s thick musical and lyrical melancholia.

‘Forgotten Days‘ is available in a number of limited edition vinyl variants, with physical bundles available via both the Nuclear Blast and PALLBEARER web stores, as well as digitally and on CD/cassette. The title track “Forgotten Days” is offered as an immediate download with digital pre-orders on iTunes, Amazon Music, and Bandcamp. Listeners can pre-save the album and listen to the title track on all digital locations [link].