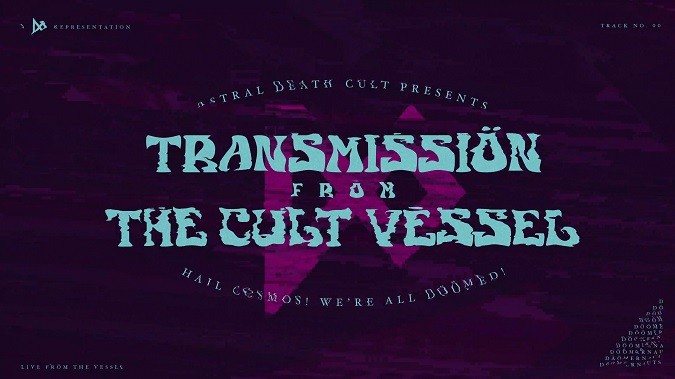 Finland’s DÖ is a riff-praising, cosmos-worshipping trio that feeds on dark astral energy and compresses it into what they call “döömer” – a unique Northern mix of stoner, doom, sludge, and psychedelic elements with hints of death / black metal. The lyrical themes have evolved from mysticism, misanthropy, and anti-religiousness towards saluting the great forces of nature and the void that surrounds us.

In September 2019, DÖ released their second (and most recent) album, called ‘Astral Death Cult,’ via Lay Bare Recordings and Mercyful Tapes. It was immediately hailed as contender for album of the year by various respected media outlets and industry tastemakers. It was on my own “Favorites of 2019” list to wrap of the year of listening.

Now one year later, at the end of September 2020, a mysterious signal was detected all around the world. The source of the signal was revealed to be the astral death cult DÖ. The content of the signal was a live performance recording called “Transmissiön from the Cult Vessel.” It includes songs from various releases, some of which the band haven’t played at gigs in ages, and, naturally, never with this current lineup. (In Autumn 2019, founding member Big Dog decided leave the band. Tarbuck, the new chief of 6-strings was introduced shortly after.)

But the most interesting part is the new eerie song called “Gravity Sacrifice“, one of the three songs that will be unleashed on an EP called ‘Black Hole Mass‘ later this year. For the astral death cult – i.e., the band – the new EP will be a passage ritual to a new level of consciousness, as they have begun to gravitate towards more evolved expression and higher spheres with the new lineup. More info about the EP will follow.

But now, dive into darkness with this cosmos rumbling performance in the video streaming below:

Transmissiön from the Cult Vessel Setlist: