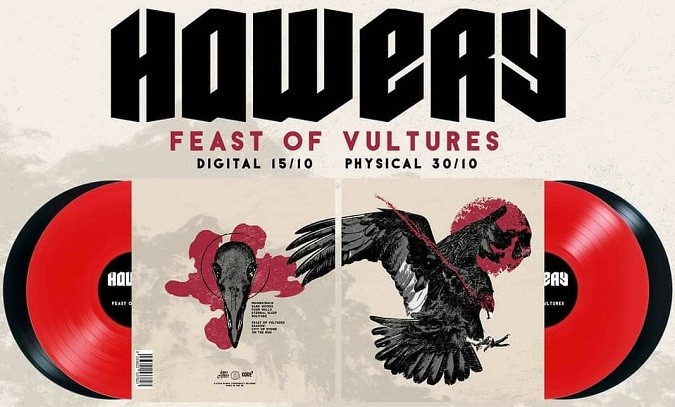 Berlin, Germany’s heavily fuzzed-out stoner rock troupe HAWERY is fully prepared for the release of their debut album ‘Feast Of Vultures,‘ due out tomorrow (October 16th) on Karma Conspiracy Records. Today, we’re honored to share an advance stream of the album in full.

Formed in 2017, HAWERY was initially conceived as a classic stoner rock band by vocalist Daniel, and the group quickly found their own style. Containing five members – Lars and Christoph on guitars, vocalist Daniel, Benjamin on drums, and bassist Thomas – who previously spent time within bands based in the black metal, thrash, punk, and hardcore genres, each of them was deeply into stoner rock. With that appreciation, they developed their unique sound for HAWERY.

The boldly thematic cover artwork by Razoreater, the new album was recorded in 2019 at Hidden Planet Studio in Berlin, and in 2020, HAWERY joined forces with Karma Conspiracy Records to release their debut ‘Feast of Vultures‘ full-length in both digital and vinyl pressing.

The band shares some details about the album:

“While writing ‘Feast of Vultures’ we tried to combine a classic Stoner record with the music we like the most. Since all band members have their origin in different genres of music we didn’t settle for a certain style. We were crossing borders and blurring genres a little bit. Taking what we like about Thrash, Hardcore or Punk. The album was recorded, mixed and mastered in December 2019 by Jan Oberg at Hidden Planet Studios in Berlin and we couldn’t be happier with the outcome.

“We found the perfect label and it is a pleasure for us to join forces with Phil from Karma Conspiracy Records. It is somehow strange to put out a record in these times, not performing it live, but we are totally thrilled to release our debut via Riff Relevant and hope you guys like what you hear.“

‘Feast Of Vultures‘ tells the story of a somehow dystopian scenery, a wasteland. A struggle for survival in a world full of threats and primeval fears. The record is about isolation and insanity, as well as how to overcome them and rise again. Despair and devastation always go hand in hand with hope and rebirth.

Take a break and soak in HAWERY‘s album streaming in its entirety below. You’ll find massive levels of fuzz covered stoner rock, with strong touches of psych-rock and occasionally the darker intensity of doom metal.

Tomorrow, October 16th brings this release to the public’s ears via Karma Conspiracy Records and is available to order in physical format vinyl variants in either standard black or solid red color pressing, as well as digital download or streaming through most outlets.  Grab a copy of ‘Feast Of Vultures‘ through Bandcamp [HERE].