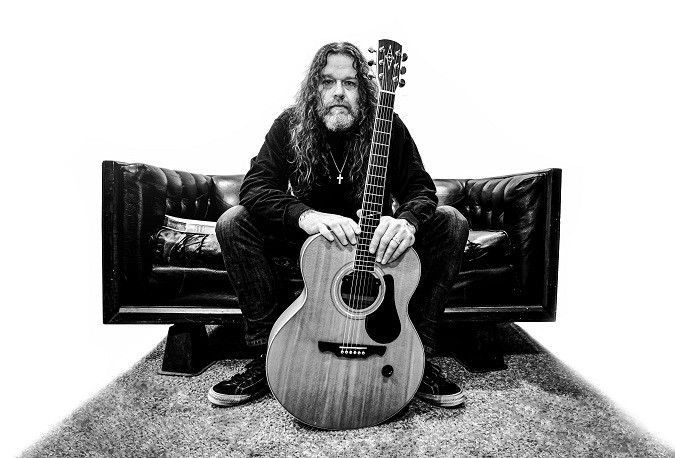 ‘Funeral Suit‘ comes as the second chapter of Ripple Music‘s ‘Blood And Strings Acoustic Series,‘ in which some of the most admired names in rock and metal unplug to record albums of acoustic heaviness. It was recorded and mixed by Tony Reed at his HeavyHead Recording Co., will be issued on November 6th, 2020, and is available now to preorder on deluxe edition vinyl, CD, and digital edition via Ripple Music.

With ‘Funeral Suit‘, TONY REED delivers his most up-close and personal work to date. Known for being the driving force behind heavy rock stalwarts Mos Generator since 2000, the prolific songwriter made his solo debut with ‘The Lost Chronicles Of Heavy Rock Vol. 1‘ tribute record in 2015, yet never had he found the right occasion to sit down, grab a guitar, and lay bare as freely and soulfully as he does on ‘Funeral Suit‘.

This darkly acoustic solo effort might be a startling change from what a frequent listener is accustomed to hearing from any of the groups he’s been involved with, either as a performer or an audio engineer (examples). There are a couple of haunting variations of Mos Generator songs, but the album is mostly works written without a proper home to place them in until now.

In contrast to the heavy rock prog power of Mos Generator or the airy experimental desert psych of Big Scenic Nowhere, the atmosphere of ‘Funeral Suit‘ may hover somewhere closer to Reed’s country-rock project Hot Spring Water. ‘Funeral Suit‘ is a candid and unvarnished look at the undeniable talent of the musically possessed joined with decades of disciplined playing. There couldn’t be a more suitable home befitting these graceful songs than here.

These quieter perspectives highlight how Reed‘s self-challenge in skill with various instruments and styles over the years have only benefitted his songwriting, and ‘Funeral Suit‘ may surprise the unprepared with piano arrangements or flute (via mellotron) interludes. The few faint scars or scratches that may be heard simply remind you that there was more humanity elegantly powering that heavyweight live gear and stage presence than any reliance on electronic trickery and volume.

The tendency of his acoustic sound seems to naturally reach into the depths of Southern Gothic Americana – elemental instruments deftly played in combination with the raw beauty of a well-ranged voice diving into the dark recesses of emotional awareness. The removal of amplifiers and rhythm section allows for a refined songwriter perspective, carried by the brightness of his vocals (both primary and tracked harmonies) to soak in the sincerity.

‘Funeral Suit‘ is mournful and somber, without being weighted in gloom or desolation. The sobering tone of the album is dry brushed with hope, albeit apprehensive. Today’s song premiere may be a prime example of that fragile endurance; hear track two, “Moonlighting,” streaming here:

For a bit of insight into the song, here’s Tony:

“To me, Moonlighting is the most intimate song on the record. The sound of the recording gives you the feeling of sitting right in front of me. Like many of the songs from this record, it was recorded only minutes after the arrangement was completed. At times the lyrics seem nonsensical, but I believe them to be about promises broken and kept, and the results of both.“

In addition to the premiere stream of “Moonlighting” today, both the title track “Funeral Suit” and the first single “Waterbirth” are also streaming below via Bandcamp and YouTube, respectively.

More details from Tony Reed on ‘Funeral Suit‘ and the process of creating the album itself:

“Over the years I’ve recorded many acoustic songs but never set out to make an acoustic album, and although I have been talking about doing this for some time now, I’ve never had a solid concept of how it would end up sounding in tone and feel. Early drafts of this record had more acoustic renditions of Mos Generator songs and had a heavier overall feel. That approach changed in the fall of 2019 when, in a very short time, I wrote all the songs that would become side one. I was given a nylon string acoustic guitar, a baritone guitar, and I borrowed a resonator that was in a tuning I had never played in. I used those new challenges to write in a way that was different than just playing straight acoustic by utilizing odd tunings and fingerpicking to expand on my style.

In recent years my lyric writing has become more revealing of my personality and how I feel about decisions I have made throughout my life. I’ve penned these feelings in quite a few songs over the last four Mos Generator records, but I’ve found that it’s sometimes hard to convey those emotions inside of a heavy rock format.

Playing songs in an acoustic environment allows for the meaning of the lyric to present itself clearly, at times being the full focus of a song, revealing complex levels of emotion that I had no idea were there until I was done writing the words and could take a step back to analyze the lines. Most of the time when I sit down to write lyrics for a song the music has already been arranged and recorded, then I sit in front of the recorder and write and record the vocals line by line or verse by verse. By doing it that way I am relying on the feel of the music to dictate the kind of words I put to it.

A large percentage of the compositions on this album where the first or second takes of the music and vocals for songs that had been written and arranged only minutes earlier, giving them a very raw and unpolished feel. A lot of them were written on the couch that I’m sitting on in the back-cover photo.”

November 6th reveals the full public release of TONY REED‘s ‘Funeral Suit‘ from Ripple Music and is available to order now in the following formats: