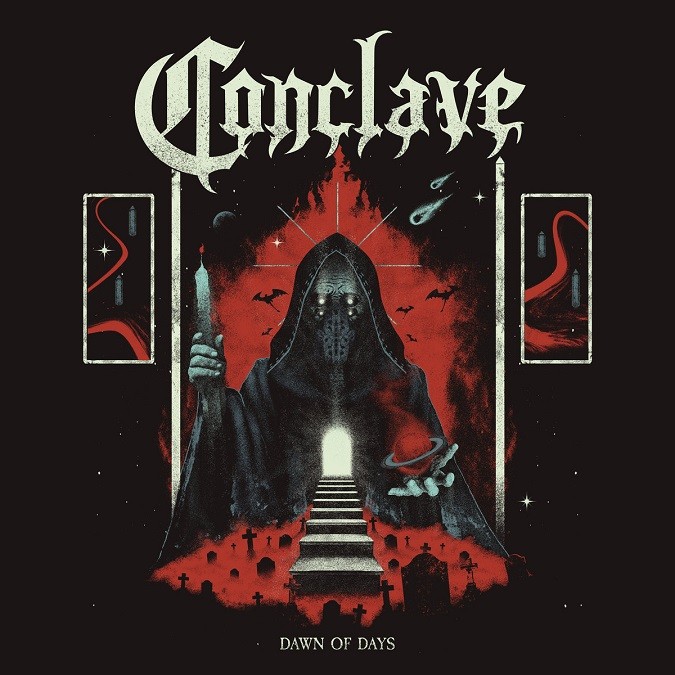 A while back we shared news of the Western Massachusetts massive doom CONCLAVE partnering with Argonauta Records to release its new ‘Dawn Of Days‘ album. Well, that very pummeling album is out this week and today we have a new song to share…

The album will be released this Friday, April 23rd, and shows CONCLAVE progressing into new realms with their combination of hammering sludge and melodic heavy grooves with darkly demonic doom, melding it into a cohesive sound that appeals to fans of all genres of heavy music.

‘Dawn Of Days‘ was engineered and produced at Blackheart Sound in Manchester, New Hampshire by Eric Sauter and Conclave during the spring and summer months of 2020. Mastering services provided by Esben Williams (Monolord) at his Studio Berserk in Gothenburg, Sweden. The ominously intense cover artwork is by Ryan of The Rotting Mess/ Cryptworm Designs.

The title track for ‘Dawn Of Days’ premieres today in video format below. The band shares some insight into the new video:

“‘Dawn of Days’ inhabits a bleak space between the end of some long forgotten tragedy and a horrible new beginning. The stage is now set for what’s to come.

No Master Studio from Barcelona, Spain created this entrancing digital art video for us. It is their amazing, dark interpretation of the complete album artwork and lyrical theme of the song.”

Five songs, a shade over 45 minutes total. Brutal anguish and despair radiantly poured over the harsh obsidian ashes of a wretched life of malice caught in the claws of redemption. That’s what I hear and feel within the five tracks on ‘Dawn Of Days’. Relentlessly beautiful.

With a musical resume that includes such acts as WarHorse, PanzerBastard, Desolate, Tenebrae, and Benthic Realm, along with several other bands and projects over the decades, ‘Dawn Of Days‘ will be the crushing culmination of all the members’ longtime experience. With an endless supply of depressing uncertainty and rage coursing through the United States in 2020, CONCLAVE used that energy to forge five new staggeringly heavy and atmospheric songs.

There is no catering to trends or watering down the riffs with this band. It’s pure and honest metal in an uncompromised form. ‘Dawn Of Days‘ is set for release on April 23rd, 2021, through Argonauta Records and is available in multiple formats. Check out the new video for the title track below and order the album now at the following locations: