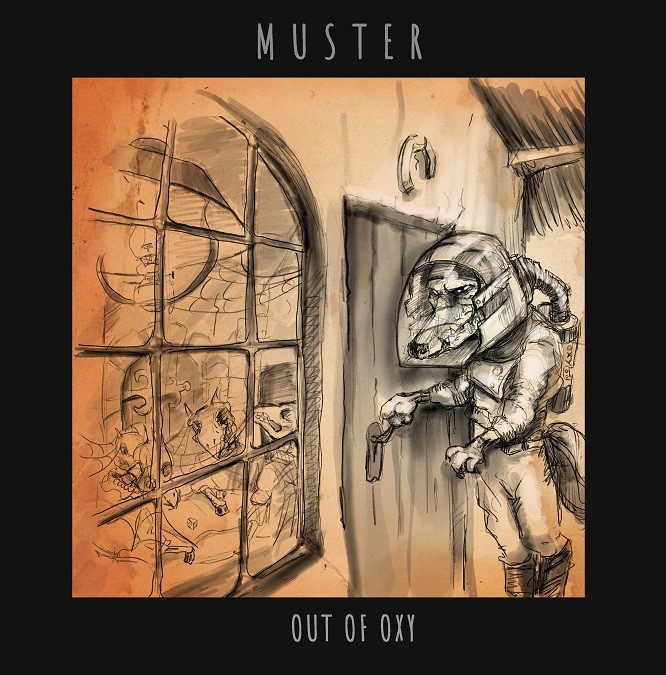 Arnhem, The Netherlands‘ alternative metal band MUSTER debuts a new video single for today’s premiere. “Out Of Oxy” is the first single off the band’s upcoming album ‘Drift‘. But this is merely the current news culminating from the band’s history…

In the summer of 2017, the four gathered forces as friends and formed a band, a ‘fight club’ if you will; anything goes and everyone is in, with drums, guitars, and amps that is. Gathering some serious highs while going by the name ‘OORSUYS’ they released their first album ‘Chiron‘ which was well received and did well in their local charts. The album was praised for its richness in melody, its wide array of vocal styles, and its raw and pure energy. During the long Covid-19 break the band decided to rename itself, deeming the ‘tongue in cheek’ name ‘OORSUYS’ was no longer fitting. To capture their longing to gather in these trying times as well as the driving force of the music, the foursome chose the name ‘Muster‘.

Though they’ve moved away from the grunge roots, there’s no denying the resemblance to ’90s alternative rock bands in sound and feel. There’s no glamour and no bullshitting, band and audience are equal, and everything is cranked up to eleven. It’s genuine, raw, melodic, and intimate at the same time. Their music, the sound and the stories they tell; they know no other way than to bring it loudly, energetically, and passionately. MUSTER is sure to scratch an itch if Seattle was where you wanted to be in the ’90s, but they do turn it up a notch! Muster is not here to merely relive the spirit from back then; in sharing their story and sound as they strive to explore new territory, right here and now.

As MUSTER, the band means to let themselves go and invite you to do the same.

The first single of the upcoming album ‘Drift‘ is debuting today, July 23, 2021. “Out of Oxy” tells the story of ‘Drift‘; the band wrote the track in a time when one of them was struggling with the backlash of an addiction to painkillers. The lyrics, written by vocalist Maarten, can be taken quite literally but they grew to be more about struggling with the day-to-day habits in which we feel safe and sound, knowing they are in fact suffocating us. The song doesn’t present a way out, nor do they feel it needs to; facing the facts and being able to put it to words (and express it in music) paved the way for healing and has proven to be the biggest step. It’s all about facing yourself and dealing with parts of yourself you do not wish to be confronted with instead of turning a blind eye.

In addition to his vocal qualities, Maarten is also a talented illustrator. For the artwork of “Out of Oxy” above, he chose to depict the symbol of repeating patterns: the Big Bad Wolf. Although the wolf has clearly evolved, as can be seen by his spacesuit, he still can’t break his old habits of trying to seduce the seven goats to open the door for him. The goats have long since passed away but the wolf can’t stop visiting them, his having learned nothing from all the past experiences that emphasize the destructiveness of his habits.

The “Out of Oxy“ track was recorded at Arnhem-based Studio Schaapsdrift and mixed at Abbey Road Amsterdam by Erwin Palper, with mastering completed by Erwin Hermsen of Toneshed Recording Studio.

The premiere of the new “Out of Oxy” single is happening now, in both audio via SoundCloud as well as in video format is streaming below. The lyrics and music of “Out of Oxy” grab you by the throat and embody fear and anxiety because they are honest and raw. The many dissonances and breaks pave the way for relief, as the expression of the struggle is a means to give yourself space and gain control. With “Out of Oxy“ MUSTER takes you on a high-octane runaway rollercoaster ride without losing control, hoping to inspire you to break habits by starting to be honest with yourself.

Gain some insight into both the new song as well as the band itself, from the quite personal sharings by each member of Muster through the individual images below…

1 thought on “Premiere: MUSTER Debuts “Out Of Oxy” Video Single”